Growing up in Canada, Agnes Woodward, who’s Plains Cree and originally from Kawacatoose First Nation, always knew that her family cared deeply about missing and murdered Indigenous women. In the 1990s, she watched as her aunt Mona and a few others began trying to draw attention to the lacking police response when Indigenous women went missing: They would hold up images of missing friends on street corners. In 1992, they organized the first march in Vancouver, B.C., in memory of missing and murdered Indigenous women (MMIW).

Then, in 2015, the Canadian government approached Woodward’s family to ask if they wanted to add her aunt, Eleanor (Laney) Ewenin, to the list it was compiling as part of its National Inquiry into Missing and Murdered Indigenous Women and Girls. The entire family gathered to talk over the decision and concluded that “if we step up and we tell our story” and it helps any other families, “then it’s our responsibility to do so,” Woodward recalled. Her mother, uncle and aunts had been taken from their parents in Canada’s so-called Sixties Scoop, a period that lasted into the 1980s during which the Canadian government removed Indigenous children from their parents’ care and placed them with foster families. Laney had been separated from the other children, and in 1982, when she was just 23, she was killed.

Woodward, now 38, became a seamstress and began designing ribbon skirts in honor of her aunt and other missing women, eventually creating the company ReeCreations in 2018. Her ribbon skirts quickly became a continentwide symbol of the MMIW movement.

Those ribbon skirts have also recently made headlines. On March 18, when Deb Haaland made history as the first Native American sworn in as U.S. interior secretary, she wore a bright blue ribbon skirt — sewn by Woodward herself. Two weeks later, Haaland announced the formation of a new Missing & Murdered Unit (MMU) within the Bureau of Indian Affairs.

The MMU will leverage federal resources to support investigations into unsolved cases of missing and murdered Indigenous people, while also working on active investigations and gathering data about the crisis, according to the Interior Department. The unit builds upon a presidential task force known as Operation Lady Justice that was established by the Trump administration in 2019, but which some advocates say failed to adequately consult with tribal communities. 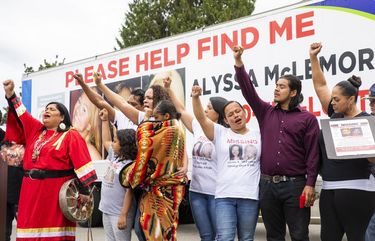 Organizers such as Woodward celebrated the opening of the Missing & Murdered Unit, noting that an Indigenous official was able to announce in two weeks what they have been demanding for decades. But she also cautioned that the design of the unit will determine its success. Advocates have called for resources to be directed not only toward investigations, but also toward prevention and healing, emphasizing that tribal consultations will be key to the initiative’s work.

“We know that we belong here. We know we belong in every aspect of decision-making,” Woodward said. “It’s not reconciliation, but it’s a step in that direction.”

In the United States, homicide is the third-leading cause of death among Native American women. They are also murdered at a rate as high as 10 times the national average, according to the Justice Department. The National Crime Information Center includes 1,500 American Indian and Alaska Native missing persons, but according to the Urban Indian Health Institute, most cases go unreported. When information on missing persons is collected, law enforcement often omits or misclassifies racial data — making it difficult to assess the true extent of the violence, according to advocates.

Violence against Indigenous peoples is a crisis that has been underfunded for decades. Far too often, murders and missing persons cases in Indian Country go unsolved and unaddressed, leaving families and communities devastated,” Haaland said in a news release about the MMU.

Tribes have no jurisdiction over missing and murdered cases because they are classified as major crimes. Annita Lucchesi (Cheyenne), executive director of the Sovereign Bodies Institute, said that’s a problem: Other countries are consulted when their citizens are murdered on U.S. soil, and that should be the case when it comes to tribal nations, she said.

“The U.S. government and the Canadian government have treaty obligations by international law to provide the resources that they promised they would to tribal nations, whether that be for education, health care or to address violence and crime,” she said.

Addressing those data gaps and supporting ongoing investigations is one of the first steps the MMU can take, according to advocates.

“What we need to be moving forward with is having database systems that can talk to each other, are interoperable, and that tribal nations can get access to,” said Abigail Echo-Hawk (Pawnee), director of the Urban Indian Health Institute.

Echo-Hawk noted that a key gap in resources she has seen in government intervention is prevention services.

“We have to have a focus on prevention, which means decreasing risk factors for sexual assault, domestic violence, all of the things that increase whether or not a person would go missing, murdered or be trafficked,” she said. “We have to go upstream and stop the violence, not just treat the symptom.”

Based on forthcoming research that Echo-Hawk conducted with 122 Indigenous survivors of sexual assault, more than 90 percent of survivors specifically want culturally grounded intervention and healing services. But developing those services is difficult because many Indigenous communities are deeply impoverished, according to Echo-Hawk.

“We consistently hear that families are lacking resources and not just the resources to find their loved one or to close a murder case, [but also] the mental health resources, the financial resources, the housing resources, all of the things that affect a family when a loved one goes missing and murdered,” she continued.

We consistently hear that families are lacking resources and not just the resources to find their loved one or to close a murder case, [but also] the mental health resources, the financial resources, the housing resources, all of the things that affect a family when a loved one goes missing and murdered.”
— Abigail Echo-Hawk, director of the Urban Indian Health Institute

Advocates have urged that the MMU consult closely with tribal nations — a step they say its predecessor, Operation Lady Justice, failed to do. Representatives for the Justice Department did not respond to requests for comment.

As Haaland’s Missing & Murdered Unit launches, Lucchesi and Echo-Hawk agreed that they’re cautiously optimistic — but that it will be important for advocates to hold the unit accountable to their goals. Plus, Lucchesi noted, there will be deep-seated skepticism to overcome: She said the vast majority of the hundreds of families she’s worked with have had “really negative experiences” with law enforcement.

“I don’t have a lot of faith in that system and its ability to be salvaged into something useful for our people,” she said. “What I argue for is restoration and recognition of tribal sovereignty.”

Woodward, for one, said she “can tell you in so many ways what injustice feels like. But what does justice look like or feel like? I don’t know.”

That the answer remains unclear means that more work is necessary, according to Woodward: We have to “keep pushing for that, until we figure out what that means to us,” she said. “Until the families who have experienced injustice after injustice feel that they are getting what they’re searching for.”

This story first appeared in The Washington Post’s The Lily publication.

Cecilia Nowell
The Seattle Times does not append comment threads to stories from wire services such as the Associated Press, The New York Times, The Washington Post or Bloomberg News. Rather, we focus on discussions related to local stories by our own staff. You can read more about our community policies here.
Advertising