WASHINGTON – Millions of Americans who lost their jobs during the pandemic have fallen thousands of dollars behind on rent and utility bills, a warning sign that people are running out of money for basic needs.

Nearly 12 million renters will owe an average of $5,850 in back rent and utilities by January, Moody’s Analytics warns. Last month, 9 million renters said they were behind on rent, according to a Census Bureau survey.

Economists say the data underscores the deepening financial disaster for many families as the pandemic continues to shut off work opportunities, lending new urgency to negotiations over a second round of stimulus that could reinstate federal unemployment insurance and rental assistance, among other forms of aid.

On Monday, lawmakers were working to release an outline of the latest $908 billion bill, which has some bipartisan support. The deal would restart $300 in weekly federal unemployment in January running through April, although details are still being worked out, congressional aides said.

The stakes are high for some 20 million Americans receiving some kind of unemployment aid, who have seen weekly checks dwindle since August, making it harder to pay bills. About 12 million unemployed are slated to have their benefits cut off entirely at the end of the year unless lawmakers act before then. 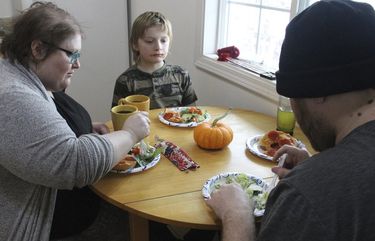 With coronavirus cases at all-time highs, the economic recovery has stalled and job opportunities remain scarce. Only 245,000 jobs came back in November, the slowest pace since the recovery began. Restaurants and retailers cut jobs, and more small businesses are closing, data show.

The numbers of those behind on rent and utilities were especially high for families with children, with 21% falling behind on rent, and among families of color. About 29% of Black families and 17% of Hispanic renters were behind, the Census Bureau reported. A separate analysis by the Federal Reserve Bank of Philadelphia, looking at people who had jobs before the pandemic, found 1.3 million such households are now an average of $5,400 in debt on rent and utilities, after those people had lost jobs and their family’s income plunged.

“The tidal wave is coming. It’s going to be really horrible for people,” said Charlie Harak, a senior attorney at the National Consumer Law Center. “The number of people who are now 90 days behind and the dollars they are behind are growing quite significantly.”

Nashville, Tenn., mother Nikki Cornwell is $4,000 behind on rent and fears she will be evicted right after Christmas. Her water was shut off on Monday. Her landlord filed the paperwork already, and her court date is set for Jan. 5 – just after the federal eviction moratorium is set to expire.

“I am behind on my rent. I will get evicted soon with my kids who are in virtual school and need internet,” said Cornwell, who lives with her mom and two kids. “I’ve had bad moments, but never anything like this.”

Cornwell, 36, lost her job in March at a factory that packages tea. She contracted the coronavirus in May. One fearful night she called 911 because she felt she couldn’t breathe. She has mostly recovered but still can’t smell anything. She had a job offer last month, but it got rescinded as coronavirus cases soared and the company decided to pull back on hires. She was getting $275 a week in unemployment, but that just ended. She has pawned jewelry and her son’s beloved PlayStation to pay for food.

“This is like a Charles Dickens novel,” said Mark Wolfe, executive director of the National Energy Assistance Directors’ Association. “It’s an evolving story of how people at the bottom are suffering.”

Many unemployed Americans were able to delay paying rent this fall under eviction moratoriums. But those protections end soon, and landlords and utilities are eager to get paid, because they have their own bills and taxes to pay. Economists warn low-income families won’t be able to suddenly pay back three to six months of rent at once.

The federal eviction moratorium is slated to end on Dec. 31, even as coronavirus cases spike and the economic recovery fizzles. Researchers at the Philadelphia Fed say even their conservative forecast warns evictions will spike 50% higher next year.

This is like a Charles Dickens novel. It’s an evolving story of how people at the bottom are suffering.”
– Mark Wolfe, National Energy Assistance Directors’ Association

Shelbie Selewski is $2,100 behind on rent and utilities after losing her job as a medical receptionist in Macomb County, Mich. Her landlord has taped eviction papers to her door three times, and her electricity was shut off in September – on her son’s third day of virtual kindergarten. She begged friends and relatives for help to get the electricity back on, but bills are piling up again.

Selewski, 29, receives $200 a week in unemployment and recently sold the family’s TV and PlayStation 4 to prevent another utility shut-off. Her new baby was born with a collapsed lung, putting the infant at high risk during the pandemic. She and her fiance have not been able to find jobs.

“It has been the worst year ever. I’ve watched everything I’ve worked for go away,” Selewski said. “Every time I paid something and felt some peace, it felt like I got a utility shut-off notice three days later.”

Landlords and utilities increasingly worry they will have to eat this debt. Meanwhile, struggling families like the Selewskis fear no one will rent to them again after an eviction in which they were so far behind on rent. Bad credit can hurt families for years.

Amid those pressures, renters and landlords are urging Congress to approve bigger unemployment payments and another round of $1,200 stimulus checks, which would go a long way toward helping alleviate the debt burden on the unemployed. Many families say they fell behind on bills this fall after the extra $600-a-week unemployment payments ended in late July.

“The longer employment stays suppressed, and people stay out of work, it will make it even harder to catch up on the debt and dig yourself out of that hole,” said Davin Reed, community development economic adviser at the Federal Reserve Bank of Philadelphia.

So far, however, Republican and Democratic leaders in Congress remain far apart on a stimulus deal, which they have been debating since July. A bipartisan compromise unveiled last week includes $25 billion for rental housing assistance, but a package released by Senate Majority Leader Mitch McConnell, R-Ky., did not include any money for housing or utilities. The House Democrats’ Heroes Act includes $50 billion specifically for low-income renters.

“It’s much better for Congress to err on the side of helping too much than too little,” said Mark Zandi, chief economist at Moody’s Analytics. “There’s nothing scarier than losing your home, especially in January with a pandemic out of control. That would be overwhelming.”

Zandi predicts as much as $70 billion in unpaid debt by January, a painful amount that renters, landlords and utility companies will have to sort out. But he thinks the bigger damage to the economy could come from Americans watching people get evicted in early 2021 – a sign the federal government no longer cares.

“The economic damage created by this pandemic will be many times more severe if we lose faith that the government has our back,” Zandi said, adding that it could trigger a drop in consumer confidence.

Data from the Mortgage Bankers Association shows $9 billion in rent wasn’t collected in the third quarter. Without that money, landlords are struggling to pay property taxes, insurance and other upkeep costs, adding more strain to the economy.

Utility data is showing equally alarming signs of strain. New Hampshire has seen a 66% jump in the number of families who are 90 days or more behind on utility payments compared with 2019. Pennsylvania has seen a 67% increase over the last year in the number of households in arrears, according to data compiled by NEADA.

“For families struggling right now and trying to get back on their feet, we have to find a way to write off this debt,” Wolfe said.

NEADA is asking for $10 billion in additional Low Income Home Energy Assistance Program funding to help low-income families pay their utilities this winter. The House bill, the most generous so far, had $4.5 billion.

Cornwell and Selewski check the news daily for any sign that additional help may be on the way. Both women have sought aid from church groups, friends and local government agencies, a piecemeal system of help that is still leaving them thousands of dollars behind on critical bills.

“We didn’t cause any of this, but it feels like Congress is saying you are on your own to deal with this,” Cornwell said.

The Washington Post’s Jeff Stein contributed to this report.