A 25-foot totem pole, intricately hand-carved and painted by Native Americans, arrived in the nation’s capital Wednesday afternoon after a two-week cross-country journey from Washington state, as part of a campaign to protect sacred tribal lands.

Hauled on a flatbed trailer, the roughly 5,000-pound totem pole was brought to the front entrance of the National Museum of the American Indian on the Mall, where a small crowd came to welcome it. Douglas James, a Lummi Nation member who was one of the pole’s carvers and traveled with the group that brought it across the United States, said they met thousands of people along their journey — many of whom became emotional as they touched the pole.

“They’d burst into tears because they could feel the energy,” he said outside the museum just after the arrival of the pole, which was made from a 400-year-old red cedar tree that was cut, carved and painted with images of importance to Native Americans. 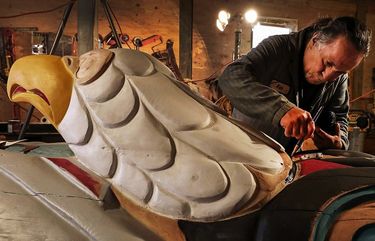 Lummi Nation carvers and allies to embark on national tour to D.C. (April 12)

“It’s a very historic moment to bring it to D.C.,” said Phreddie Lane, a Lummi member who came up with the idea to bring the totem pole to D.C. “And to have it sit among these sacred national monuments, representing Native American peoples, is special.”

The pole will be on display for three days outside the entrance of the National Museum of the American Indian. On Thursday afternoon, tribal leaders, some of the pole’s carvers, and Interior Secretary Deb Haaland — the first Native American Cabinet secretary — along with other dignitaries are scheduled to bless the pole at a ceremony on the Mall.

The totem pole’s journey, which organizers dubbed the “Red Road to DC,” was led by about a dozen people, many of whom are Native Americans and members of the Lummi Nation, a tribe of about 5,000 members west of Bellingham, Wash. They raised about $500,000 from dozens of nonprofits, sponsors and tribal groups for the cross-country trip.

En route to D.C., the caravan stopped at several spots of importance to Native Americans including Chaco Canyon, a national park in New Mexico; the Standing Rock Indian Reservation in North Dakota; and Bears Ears National Monument in Utah. Each faces threats of development tied to natural resources or pipelines.

Organizers are now working to find the pole a permanent home in or near the Washington, D.C., area.

But finding a spot for the enormous totem pole in a city filled with red tape has been tough. It wouldn’t fit inside the National Museum of the American Indian because engineers there said it was too big and too heavy for its floors. Its arrival coincides with an exhibit at the museum that will showcase the Lummi Nation’s history of pole carving.

Another 13-foot totem pole made by the same group — the “House of Tears Carvers” — was placed at Congressional Cemetery in D.C. to honor victims who were at the Pentagon during the Sept. 11, 2001, terrorist attacks. The group has carved and painted more than 110 totem poles in the past three decades for homes for veterans, schools and other groups.

James, the carver, said they want to give the totem pole to the Biden administration and send a message to Washington about the sacred tribal lands: “We want to come together with one heart and one mind to save these sites.”

For many of those on the caravan, presenting the pole in D.C. to Haaland, who is a member of the Pueblo of Laguna, is a meaningful part of the journey.

Crystal Echo Hawk, who is Pawnee and executive director of the nonprofit IllumiNative advocacy group, said showcasing the totem pole in D.C. is meant for “Americans to see that Native peoples are leading the way around issues of protecting lands, waters.”

Too often, she said, Native Americans haven’t been fully included in major decisions on development in and around their sacred lands.

“Native peoples need to be consulted,” Echo Hawk said. “No one wants a corporation or government to come into your neighborhood and develop something that jeopardizes your drinking water or bulldozes your church. But that’s what essentially happens to Native Americans and our sacred sites.”

Totem pole carving is a tradition for some tribes, mainly in British Columbia and the U.S. Pacific Northwest. The totem poles often are said to be a “spiritual being” and are considered sacred symbols of a tribe, clan or a family tradition.

For the Lummi Nation, totem poles historically are carved with symbols that represent a certain clan of a tribe or show a family or tribe’s lineage. They can have scenes that depict an important tribal leader or might have a panel that shows a tribal battle.

“They represent visions, dreams and stories that are handed down and shaped through each generation,” said James’s brother — Jewell Praying Wolf James, who is the master carver of the pole brought to D.C.

Measuring about 43 inches wide, the totem pole was made in roughly three months. The tree was cut, carved and painted with images and symbols that include an eagle, moon, salmon and a man praying.

It contains an image of a woman with a girl kneeling near her, a scene meant to depict grandmothers across the country who are raising and teaching their granddaughters traditional Native American ways, according to Jewell James.

He said seven tears near the image represent seven generations of Native people throughout the world who have been “traumatized by the treatment they received from non-Indians.”

A red hand on the pole represents the hundreds of Indigenous women who are murdered or go missing each year.

The project marks the first time House of Tears Carvers has made and moved such a large totem pole.

Stops on its voyage from the West have drawn thousands of Native Americans and non-Natives, organizers said, who came to offer support and prayers and lay their hands on the pole.

At Snake River — a tributary of the Columbia River that runs through part of Idaho and other states where Native American tribes are worried about the declining population of spawning salmon because of dams — many who came said they felt special to see the pole.

“Carrying a totem pole from Indian Country with a message is an ancient practice and considered a way to raise awareness of what’s important to us,” said Shannon Wheeler, vice chairman of the Nez Perce tribe in Idaho. He said he hopes the message the pole brings to Washington is that Native Americans are “not history.”

“We’re not pre-1900s and we’re not just old black-and-white photos you find on the internet,” Wheeler said. “We’re still living, breathing and exercising our way of life that we’ve practiced for hundreds of years … We’re still here, and we don’t intend to go anywhere.”