In one of his last acts before leaving office, Interior Secretary David Bernhard on Tuesday granted Hammond Ranches Inc. a 10-year grazing permit, curtailing any potential administrative appeals in the face of vehement opposition from environmental advocacy groups.

In February 2014, the federal agency rejected the Hammonds’ renewal application, citing the criminal convictions of father Dwight Hammond Jr. and his son Steven Hammond for setting fire to public land.

The Hammonds’ case sparked the takeover of a federal wildlife refuge in Oregon by right-wing extremists in 2016. 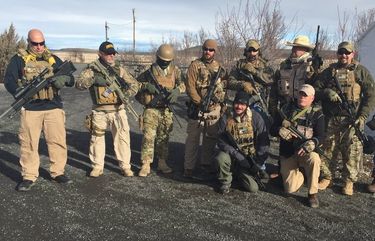 “It is outrageous — although sadly predictable — that the Trump administration has reached down into the Burns Field Office of the Bureau of Land Management and seized control to make sure they could give the Hammonds preferential access to public lands,” Ruprecht said in a prepared statement.

The environmental protection group contends the renewed grazing will harm sage-grouse habitats in the region and increase invasive weeds and the likelihood of destructive fires.

“It’s clear that the Bureau of Land Management was told by on high to get this done before the Trump Administration leaves tomorrow. It’s corruption, down to the fact that they raced through the weekend to get this rubber-stamped before the inauguration.”

The U.S. Bureau of Land Management had proposed on New Year’s Eve returning grazing rights to Hammond Ranches for 10 years, citing among other reasons their “extensive historic use” of the allotments and what the federal agency characterized as their “past proper use of rangeland resources.”

Susie Hammond, the matriarch of the Hammond family, said Tuesday afternoon, “Well, we don’t have any cows on it yet, so we’ll see.”

Asked about the timing of the permit just before Trump is set to leave office, she added, “You don’t suppose that was strategic?”

In December 2019, U.S. District Judge Michael H. Simon of Portland revoked the eastern Oregon grazing permit for Hammond Ranches Inc. after finding that a renewal order by former Interior Secretary Ryan Zinke, issued on Zinke’s last day in office in early 2019, was an “abuse of discretion.”

When they walked out of prison, Dwight Hammond had served two years and nine months in prison and his son had served three years and four months. In 2015, the Hammonds also paid $400,000 to settle a civil suit brought by the government to recoup damages caused by the fires.

Simon ruled that neither Zinke nor the Bureau of Land Management made a finding as required that the Hammonds were in “substantial compliance’’ with federal grazing regulations or had a “satisfactory history of performance.” The judge said the Hammonds could reapply for a new permit and go through the proper process to obtain one.

Simon’s ruling came after three environmental advocacy groups — Western Watersheds Project, the Center for Biological Diversity and WildEarth Guardians — sued the Interior secretary and the Bureau of Land Management. The advocacy groups argued that Zinke acted as if he were “above the law’’ by failing to consider the Hammonds’ unsatisfactory record or do proper environmental reviews before ordering the renewal of the grazing permit.

The Hammonds reapplied for a permit, but were competing with three others who sought grazing rights to the same federal parcels held by the family for decades, according to Tara Thissell, a spokeswoman for the U.S. Bureau of Land Management’s Burns office.

This time, the land management bureau did prepare an environmental assessment, analyzing the effects of issuing one or more livestock grazing permits on 26,378 acres of federally managed public land, according to the bureau’s website.

On Tuesday, the bureau’s website carried the Interior Secretary’s final decision granting the permit and authorizing the construction and removal of range improvements on the land.

The notice of the decision reads: “The parties are advised hereby that, as Secretary of the Interior, I am exercising jurisdiction over this matter in accordance with 43 C.F.R. 1/4 u00a7 4.5. As described below under the heading ‘Appeals,’ there are no further administrative appeals available. The Taylor Grazing Act provides for hearings from decisions of administrative officers, 43 U.S.C. 1/4 u00a7 315h, though not from decisions of the Secretary. Similarly, the Federal Land Policy and Management Act (FLPMA) provides for a right of appeal from allotment management plan decisions issued by subordinate officials. 43 U.S.C. 1/4 u00a7 1752(f). Because the duly adopted regulations establishing these processes for decisions rendered by the BLM do not and cannot preclude the Secretary from exercising reserved statutory authority, this decision properly concludes administrative proceedings on this matter.”

Ruprecht argued that the land permitted for cattle grazing “had only begun to recover after the Hammonds’ cattle were removed in 2014, and the sage grouse habitats and trout streams have yet to be fully restored from the damage.”

“These particular ranchers have a long and contentious history of flouting grazing regulations, and their permit was revoked for those violations,” Ruprecht said. “The limited grazing allowed in 2019 failed to change their noncompliance, so clearly the agency has no legal basis to conclude that the Hammonds qualify for a new permit.”

Maxine Bernstein
The Seattle Times does not append comment threads to stories from wire services such as the Associated Press, The New York Times, The Washington Post or Bloomberg News. Rather, we focus on discussions related to local stories by our own staff. You can read more about our community policies here.
Advertising