Hurricane Maria cleaved Puerto Rican memory. There was one kind of life before the tempest. And an entirely different life that emerged in its wake: Un antes y un después.

Before the storm, the Caribbean island archipelago was teetering economically and unraveling politically. In the five years since, there have been ongoing blackouts, protests, earthquakes and a global pandemic. Puerto Ricans have moved from powerlessness to precarity.

As the anniversary approached, The Washington Post went back to visit those who opened up their homes then, to show us their lives now. Hurricane Fiona — which hit Puerto Rico on Sunday, destroying homes, roads and bridges — was still days away. But even before that, much of the post-Maria recovery work had just begun. 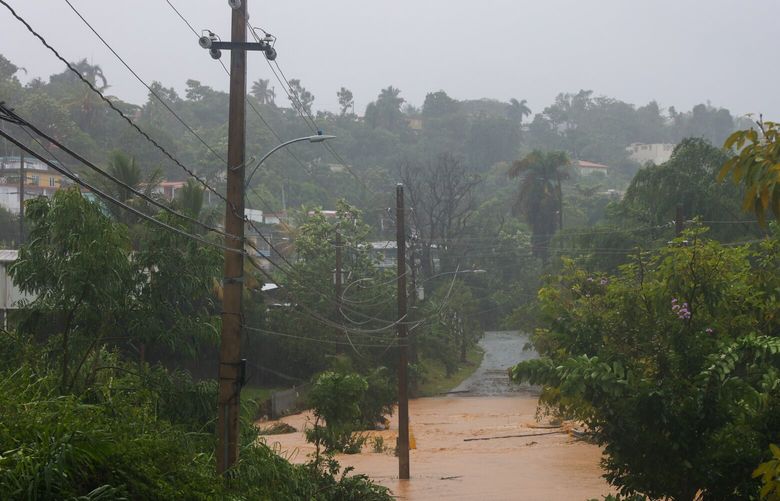 In the mountains of Utuado, teacher Maria Ortiz Viruet was already experiencing blackouts several days a week when Fiona struck — each flicker of a lightbulb filling her with anxiety.

Deeper into the lush central forest, Syndia Maria Sotomayor no longer needed a zip line to get supplies across a river. A temporary steel bridge was built after Hurricane Maria to replace the one that washed away; it still straddles the waterway. But Fiona destroyed a different bridge connecting two parts of the town not far away.

That bridge was also meant as a stopgap solution while a permanent structure was built. But Puerto Rico’s transportation secretary, Eileen Vélez Vega, said Monday that construction on the new, taller bridge isn’t slated to begin until 2024. Video a day earlier showed muddy water washing over the surface of the temporary crossing, the metal breaking apart and drifting into the current.

In the town of Yabucoa, a baseball stadium destroyed by Hurricane Maria has been demolished, but before Fiona it remained a pile of dirt as officials waited patiently for Federal Emergency Management Agency money to rebuild what had been a pillar of the community.

The people of Puerto Rico have adapted. Bregaron, the expression goes, meaning they struggled and survived. And they found ways to ensure that the lesson Hurricane Maria taught is heeded: Do not depend on any government to help.

After the 2017 storm, Maria Ortiz Viruet’s classroom was empty for months. Families moved out, and children weren’t allowed back until the small town’s electricity was restored. Her 18-year-old son, Jesús Mejías Ortiz, worried whether he’d finish high school.

The Ortiz family was without power for nine months. And in this part of Puerto Rico, no electricity means no running water. Maria had to use the creek near her house to wash clothes and bottle water. Life as they knew it was replaced with the surreal routines of another century.

Her wooden house was not severely damaged, but it took Maria months to feel safe inside again. Some of her neighbors fared far worse. One family’s home toppled off a cliff entirely. Maria stayed at her mother’s concrete abode a hundred feet away while the town recovered.

The power often goes out at Maria’s home, even when a hurricane isn’t approaching. Steep voltage variations sparked by the frequent interruptions kill their appliances. She’s not alone. Blackouts remain a staple of life in the U.S. territory despite efforts to fix Puerto Rico’s infrastructure.

Students returned to Maria’s school, but in limited numbers. Amid an ongoing exodus, the island’s population has steadily gotten older and smaller. Declining enrollment and political scandals led to closures and pressures to reduce staff. In the last two years, officials moved Maria from the only school she ever knew to a different campus nearly an hour away. She retired early, two years shy of her 30th year as a teacher, in 2020.

The 58-year-old spends her time tending to her elderly mother, cultivating coffee, plantains and other fruits on the land her father left her and participating in political meetings. But when dark clouds gather from over Lake Caonillas, she shudders at what they could bring.

“Every time the weather takes a turn, it triggers my anxiety and we all look at each other and say, ‘The power will go out soon,'” Maria said. “Then I start to feel unwell.”

Jesús, her son, graduated and lives at home while he studies to be an electrician. He wants to know how to restore power to his community. LUMA Energy, the private consortium contracted after Maria to distribute electricity across the island, offered him a job. But he declined, in part because of a lingering sense of betrayal over the local and federal governments’ slow and haphazard handling of the recovery.

As hard as it has been, he won’t leave his island. He is intent on forging a future in Puerto Rico despite the anemic job market.

“Hurricane Maria changed my life,” he said. “There is a clear difference between the person I was then and the one I am today. I learned to value things more … But Puerto Rico is the same or worse than where it was five years ago.”

In their rural, mountainous community, every rainfall portends impending darkness. Before Fiona, some streets still had concrete traffic barriers to protect drivers from steering into damaged parts of the roadway left unrepaired. The neighbor’s house that was pushed down the mountain is nearly invisible beneath tropical overgrowth.

Yabucoa’s once pockmarked streets have been repaved. Palm trees sheared by the storm grew anew and adorned the coastline. But there are few other visible signs of progress. The town’s city hall is still destroyed. FEMA allocated $26 million to repair Yabucoa’s stadium — but so far, the only work completed with federal funds is the demolition of the existing structure.

It was here that Hurricane Maria first roared onto shore, disfiguring its picturesque valley and verdant highlands. Vast stretches of land were left an ugly brown as the storm’s unforgiving winds ripped trees and homes from the ground. Yabucoa is one of Puerto Rico’s lowest-income communities, and after the hurricane, 6,000 people left to rebuild lives in the States.

Change here has been happening at a snail’s pace — emblematic of the delays and corruption that have marred the post-Maria years. FEMA has set aside an estimated $28 billion in recovery funds to Puerto Rico to repair infrastructure. But only a fraction of the money has been disbursed by the federal agency. In all, about a fifth of the money slated for major public projects has been released to local governments to begin work. The same is true for other federal agencies with funds for the U.S. territory’s recuperation.

“We are not ready to face another tempest like Maria,” said Yabucoa Mayor Rafael Surillo Ruiz, days before Fiona struck. Behind his conference table was a whiteboard. The letters “F-E-M-A” were written in red, and nearby, a series of blue question marks, echoing the doubts and frustrations brought on by the slow pace of recovery. Damaged roofs and streets that would have been relatively easy to fix if repaired quickly have turned into major reconstruction projects amid the wait for funds. He equated it to the magical realism of a Gabriel García Márquez novel. “This is Macondo.”

On Monday, Rafael said Hurricane Fiona’s destruction confirmed what he suspected. Heavy rainfall triggered severe flooding that left two neighborhoods underwater. More than 200 families had to be rescued and lost everything inside their homes, he said. Bridges collapsed, and the roadwork that had been completed dissolved under the weight and speed of floodwaters.

“If you were to ask me what my top concern is right now, it’s not repairing a bridge,” he said. “It’s how we repair the hearts of those devastated families.”

Rafael carries the weight of all the lives lost due to Maria. Across Puerto Rico, nearly 3,000 people died during the storm and in its aftermath during the power outage — one of the longest in U.S. history. It’s hard to say how many died in his town, but the mayor can name a handful of neighbors. Each barrio now has a federally funded community center equipped with a generator, communal kitchen and cistern — but they will only help meet a fraction of the town’s needs after a storm.

“The biggest lesson I’ve learned, as a city administrator, is that I can’t depend on others to help me lift up this community. Government agencies arrived too late, some two to three months later, and others never arrived,” he said. “I have the assurance of knowing that if something happens, I have community members empowered to do what’s needed.”

They were the “forgotten ones” — a metaphor reflecting the abandonment many Puerto Ricans felt in the weeks after Hurricane Maria engulfed the island archipelago.

Syndia Maria Sotomayor’s family was one of many in Río Abajo who, after Maria, depended on a zip line to ferry groceries, supplies and themselves across a raging river in a crude basket. Their house and farm were on one side. The main road to town was on the other.

In the days after that storm, she and her four sons packed bottles of water, solar-powered lights and animal feed into a wooden cart fashioned with two-by-fours nailed together. It flew just above the river using a pulley system Syndia’s husband, Daniel, devised. They used the contraption to cross the wide, muddy river to get to work, school, the bank and anywhere else they needed to keep their farm running and family safe.

The Sotomayors depend on no one but themselves and their ingenuity to get by deep in the heart of rural Utuado and most days — living as close to being off the grid as one gets in Puerto Rico. But the island’s financial crisis, exacerbated by Maria, nonetheless has put a strain on their daily lives. The price of a gallon of milk is the same as one hour’s work at minimum wage. The median income here is lower than that of Mississippi, the poorest state in the United States.

The family has adjusted, consuming the milk their goats provide and supplementing their diets with the vegetables they grow.

Six months after the bridge collapsed, FEMA completed construction of a temporary steel bridge. It remains unclear when a permanent crossing will be constructed. The current one has already rusted from exposure to the endless rain and humidity of the tropics.

The family took down their zip line, hoping never to use it again.

As the muddy waters of the Río Grande de Arecibo rose on Sunday, Syndia kept a careful eye on the bridge nearby. It was still standing 24 hours after Fiona hit, but with more rain expected Tuesday, the Sotomayors weren’t taking any chances.

Their Hurricane Maria zip line was ready, just in case.