Skip to content
By
MICHAEL R. SISAK
The Associated Press

Trump and his two children must sit for depositions within 21 days, Engoron said following a two-hour hearing with lawyers for the Trumps and James’ office.

“In the final analysis, a State Attorney General commences investigating a business entity, uncovers copious evidence of possible financial fraud, and wants to question, under oath, several of the entities’ principals, including its namesake. She has the clear right to do so.” Engoron wrote in his decision. 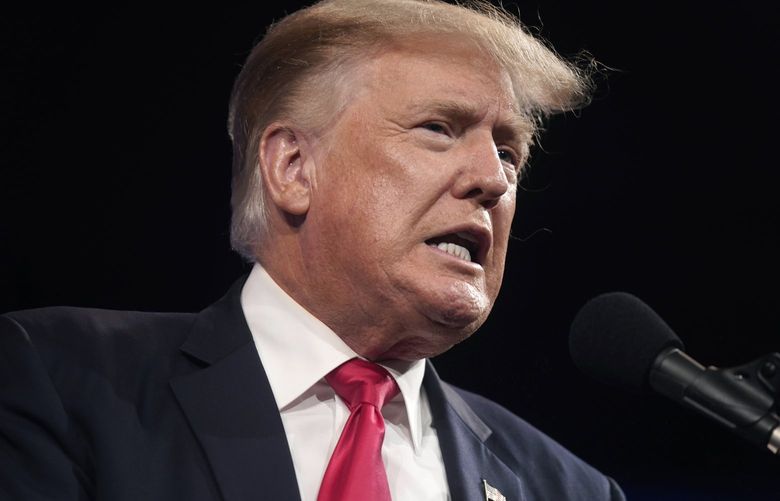 For Trump, a perilous exclamation point to years of wealth inflation

The eight-page ruling is almost certain to be appealed, but if upheld it could force the former president into a tough decision about whether to answer questions, or stay silent, citing his Fifth Amendment right against self-incrimination — something he’s criticized others for doing in the past.

“THERE IS NO CASE!” Trump said in a statement, accusing James’ office of “doing everything within their corrupt discretion to interfere with my business relationships, and with the political process.”

Trump called the ruling “a continuation of the greatest Witch Hunt in history — and remember, I can’t get a fair hearing in New York because of the hatred of me by Judges and the judiciary. It is not possible.”

In her own statement, James said: “No one will be permitted to stand in the way of the pursuit of justice, no matter how powerful they are. No one is above the law.”

James, a Democrat, said her investigation has uncovered evidence Trump’s company, the Trump Organization, used “fraudulent or misleading” valuations of assets like golf courses and skyscrapers to get loans and tax benefits.

Trump’s lawyers told Engoron that having him sit for a civil deposition now, while his company is also the subject of a parallel criminal investigation, is an improper attempt to get around a state law barring prosecutors from calling someone to testify before a criminal grand jury without giving them immunity.

“If she wants sworn testimony from my client, he’s entitled to immunity. He gets immunity for what he says, or he says nothing,” Trump’s criminal defense lawyer, Ronald Fischetti, said in the hearing, which was conducted by video conference.

Anything Trump says in a civil deposition could be used against him in the criminal probe being overseen by the Manhattan district attorney’s office. If Trump invokes the Fifth Amendment, Fischetti said it could still hurt a potential criminal defense.

“That’ll be on every front page in the newspaper in the world,” Fischetti said. “How can I possibly pick a jury in that case?”

A lawyer for the attorney general’s office, Kevin Wallace, told Engoron that it wasn’t unusual to have civil and criminal investigations proceeding at the same time. The judge rejected a request from lawyers for the Trumps to pause the civil probe until the criminal matter is over.

“Mr. Trump is a high profile individual, yes. That’s unique,” Wallace said. “It’s unique that so many people are paying attention to a rather dry hearing about subpoena enforcement. But the legal issues that we’re dealing with here are pretty standard.”

In a previous legal spat arising from James’ investigation, Engoron ordered another Trump son, Eric Trump, to testify in 2020 after his lawyers abruptly canceled a scheduled deposition. Eric Trump invoked the Fifth Amendment hundreds of times in his interview. Trump Organization finance chief Allen Weisselberg did the same when he was questioned by James’ lawyers.

Alan Futerfas, a lawyer for Ivanka and Donald Trump Jr., both of whom have been executives in their family’s business, said in the hearing that he had no reason to believe either are targets of the district attorney’s criminal investigation.

At Thursday’s hearing, Trump lawyer Alina Habba accused James of “selective prosecution” and said the attorney general is “engaging in viewpoint discrimination” motivated by her political ambitions and disdain for the Republican former president, evinced by comments she made over the years about going after Trump.

“We have an extraordinary rare case where we can prove selective prosecution because she’s put her words out there so much and taken every opportunity to voice her vendetta against Donald Trump and his family to take him down,” Habba said.

Wallace noted the state attorney general’s office was investigating Trump-related matters as far back as 2013, long before James was elected, including probes into his charitable foundation and the Trump University training program.

Engoron said the thousands of pages of evidence he’s reviewed in the case shows there’s sufficient basis for continuing the investigation and undercuts “the notion that this ongoing investigation is based on personal animus, not facts and law.”

Engoron also seized on the revelation this week that Trump’s longtime accounting firm sent a letter advising him to no longer rely on years of financial statements it prepared based on his company’s valuations, given questions about their accuracy.

Engoron described the letter as a “red-flag warning that the Trump financial statements are unreliable” and criticized Trump’s company for its contention, in a statement to the news media, that because the accounting firm did not conclude there were material discrepancies in the documents, James’ investigation should be shut down. That claim, he wrote, “is as audacious as it is preposterous.”

Last summer, spurred by evidence uncovered in James’ civil investigation, the Manhattan district attorney’s office charged Weisselberg and the Trump Organization with tax fraud, alleging he collected more than $1.7 million in off-the-books compensation. Weisselberg and the company have pleaded not guilty.

MICHAEL R. SISAK
The Seattle Times does not append comment threads to stories from wire services such as the Associated Press, The New York Times, The Washington Post or Bloomberg News. Rather, we focus on discussions related to local stories by our own staff. You can read more about our community policies here.
Advertising