WASHINGTON – President Joe Biden on Friday signed an executive action that seeks to rein in corporate powerhouses and boost competition across a slew of major industries.

The sprawling action, which includes 72 different directives, is meant to address growing concerns from Democrats about corporate consolidation in the U.S. economy and add scrutiny to the ways airline fees, prescription drug costs and Internet service are priced.

Yet the executive order largely relies on federal agencies to enact the changes, and it could take months for any concrete actions to surface. Still, Biden’s order could mark the beginning of a set of policy shifts that redraw how the federal government focuses on corporate behavior and the impacts for consumers.

“Capitalism without competition isn’t capitalism, it’s exploitation,” Biden said. “Without healthy competition, big players can change and charge whatever they want and treat you however they want. For too many Americans, that means accepting a bad deal for things you can’t go without.”

– Why is Biden doing this?

The Biden administration argues that corporate consolidation across the U.S. economy leads to higher prices and ultimately leaves consumers with few options for where to spend their money.

At the same time, the White House says less competition at the corporate level also pushes wages down. Airline workers or hospital employees, for example, may have limited options for places to work, giving them less bargaining power when it comes to higher pay.

There are also political influences at play. Concerns about monopolies and consolidation are not just rallying cries for those farthest on the left. Rather, antitrust debates now play a major role in Democratic politics. 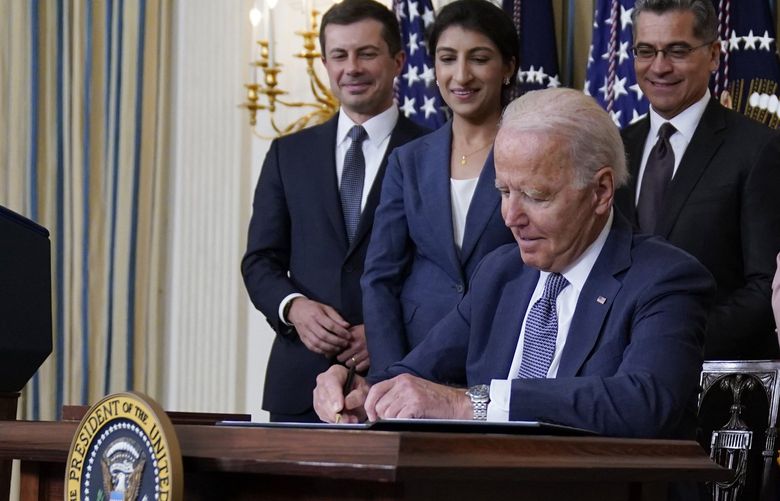 Many Republicans and large business groups, however, may see Biden’s executive order as doing too much to dictate how private markets and big business operate.

In the backdrop are broader economic forces that also affect wages, prices and competition in the labor force. As the economy recovers from the coronavirus crisis, some employers are offering higher pay to encourage workers to return. As businesses compete for new hires, and pay is going up, some economists say 2021 is shaping up to be the year of the pay raise.

– What goods or services could see the biggest impact? And what about the tech products we use everyday?

The order points to prescription drugs, health insurance, airlines and internet service as major areas of focus. The upshot appears to be that the White House wants federal agencies to give consumers more power to claw back fees that big companies charge, arguing that consumers have little leverage to fight back against mandatory fees or certain restrictions.

On drug prices, the order directs health officials to work with states on ways to import medicines safely from Canada, where they are sold at lower prices. It also directs the Department of Health and Human Services to consider issuing proposed rules that allow hearing aids to be sold over the counter, a change that would make them much more accessible to consumers.

The Department of Transportation is also encouraged to consider rules that would require airlines to refund fees when bags are delayed, or when services, like in-flight entertainment, are expected but not actually provided. The order also encourages DOT to consider rules requiring airlines to clearly disclose fees tied to baggage or cancellations.

The Biden executive order takes direct aim at the ways that tech companies have solidified their dominance and influence in Americans’ lives. If federal regulators adopt these recommendations, it may be harder for big companies like Facebook to buy up rising rivals, like Instagram.

The order also recommends new rules to stop “unfair methods of competition” in online marketplaces, which could include app stores or e-commerce platforms like Amazon. That could result in changes to how big tech giants can compete with smaller businesses, like app developers or retailers.

It also calls for new safeguards on the accumulation of data and surveillance, amid concerns about how tech companies’ safeguard people’s information in the wake of incidents like Facebook’s Cambridge Analytica scandal.

– Will the order make prices go down?

When it comes to actual price tags, the order itself cannot lower prices. The order largely directs or encourages federal agencies to take steps that can lower prices. But it remains to be seen how federal agencies respond, and over what period of time. And if agencies act too aggressively, they could draw legal challenges that force Congress to eventually weigh in.

Also, Biden’s order is not intended to solve the broader price increases currently unfolding in the economy. As the economy heals from the coronavirus crisis, demand for goods and services has shot up much faster than supply can rebound. Supply-chain backlogs, among other economic factors, have triggered a rise in inflation. But policymakers at the Federal Reserve and White House say those dynamics are temporary.

– What could this mean for my internet service?

The pandemic has highlighted long-running problems in internet access, and the order seeks to implement Democratic priorities to ensure people have choices and transparency when going online. However, they likely will not be implemented quickly. The recommendations would require action from the Federal Communications Commission – which is currently deadlocked with two Democrat and two Republican commissioners. That could delay even further changes in these areas.

The order also calls on the agency to revive Obama-era broadband “nutrition labels,” which aim to provide transparency about how much people are actually paying for their Internet service.

It also calls for the agency to limit “excessive” early termination fees so people can more easily switch to a cheaper internet provider. It also seeks to ensure people have more options in choosing a provider. It calls for the FCC to prevent landlords from making deals with companies that would limit a tenant’s options.

– Which federal agencies will play the biggest role in carrying this out?

The executive order points to more than a dozen federal agencies, many of which are beyond the White House’s direct control. It also establishes a White House Competition Council, led by the Director of the National Economic Council, to coordinate how federal agencies respond.

The order specifically encourages leading antitrust agencies – including the Department of Justice and Federal Trade Commission – to strengthen their antitrust laws and help prevent employers from collaborating to suppress wages or reduce benefits. It also encourages the FTC to ban or limit noncompete agreements and to ban unnecessary occupational licensing restrictions.

Health care initiatives were targeted at the Food and Drug Administration and the Health and Human Services Administration. The Department of Transportation, Federal Maritime Commission and Surface Transportation Board were included in the order’s priorities around airlines, shipping and rail.

Banking regulators such as the Federal Reserve, the Federal Deposit Insurance Corporation, and the Office of the Comptroller of the Currency are also encouraged to update guidelines on banking mergers to provide more robust scrutiny of mergers.

The Washington Post’s Amy Goldstein contributed to this report.