A sobering scientific analysis published Friday found that three-quarters of the people infected during an explosive COVID-19 outbreak fueled by the delta variant were fully vaccinated. The report on the Massachusetts cases, from the Centers for Disease Control and Prevention, offers key evidence bolstering the hypothesis that vaccinated people can spread the more transmissible variant and may be a factor in the summer surge of infections.

The data, detailed in the CDC’s Morbidity and Mortality Weekly Report, helped convince agency scientists to reverse recommendations on mask-wearing and advise that vaccinated individuals wear masks in indoor public settings in some circumstances.

“This finding is concerning and was a pivotal discovery leading to CDC’s updated mask recommendation,” CDC director Rochelle Walensky said in a statement. “The masking recommendation was updated to ensure the vaccinated public would not unknowingly transmit virus to others, including their unvaccinated or immunocompromised loved ones.”

The outbreak started in early July in Provincetown, at the tip of Cape Cod, a tourist destination known for its party scene. The festive July 4 holiday atmosphere proved ideal for superspreader events.

The new research and reversal in the masking guidance put the public in an uncertain position as August and a new school year approaches. Risk calculations have never been easy in this pandemic, and the viral environment just got murkier.

Scientists said the Provincetown outbreak and other recent data on breakthrough infections make clear that vaccines offer significant protection, as they were designed to, against severe illness and death but do not offer blanket protection against any chance of infection. Only a handful of people in the outbreak were hospitalized. While the data suggest vaccinated people can spread the disease, the extent to which they contribute is not yet clear. Walensky said this week that such transmission occurs on “rare occasions.”

A CDC internal document obtained by The Washington Post estimated that 35,000 vaccinated people a week in the United States are having symptomatic breakthrough infections out of a vaccinated population of more than 162 million. Vaccination coverage is higher than average in Massachusetts, with nearly 70% of residents fully vaccinated.

“This shows the delta is formidable,” said Larry Corey, a virologist at the Fred Hutchinson Cancer Research Center. “We can’t take one report of packed bars and extrapolate and say the sky is falling. The sky is not falling. But it does say the vaccine is not infallible.”

“Common sense has to be used,” Corey said. “It’s a learning moment, it’s a teaching moment. You can’t overlook the vast data we have on the effectiveness of the vaccine.”

Corey and other scientists reiterated that vaccination was the best way to end the pandemic. Turning COVID-19 infections from potentially fatal pneumonia to nuisance colds was the main goal of the shots.

“People should be reassured that if they are fully vaccinated, that they are very likely, highly likely, to be protected against severe or critical illness, the kind of illness that would cause them to be hospitalized or killed by this virus,” said Paul Offit, a vaccine expert at Children’s Hospital of Philadelphia. “Vaccines save your life.”

But the CDC has been grappling with how to communicate to the public about infections able to break through the vaccines’ protection, acknowledging they happen more quickly than many people anticipated, although illness tends to be mild. The study’s authors note that Massachusetts has a high vaccination rate and yet the virus was still able to spread.

“Findings from this investigation suggest that even jurisdictions without substantial or high COVID-19 transmission might consider expanding prevention strategies, including masking in indoor public settings regardless of vaccination status,” they write.

Jennifer Nuzzo, an epidemiologist with the Johns Hopkins Bloomberg School of Public Health, noted that the new CDC guidance on indoor masking for vaccinated people applies to communities with substantial transmission. That criterion would not have included Provincetown, which, according to the CDC report, had no reported new cases on July 3.

“What this tells us is we need much more context and better data to guide whether and when vaccinated people should wear masks because following CDC’s new guidance wouldn’t have stopped this outbreak from occurring,” Nuzzo said.

Natalie Dean, a biostatistics expert at the Emory Rollins School of Public Health, warned that these flare-ups of infections could become a persistent challenge as people move around, even to highly vaccinated areas.

“Everyone was looking forward to a fun vaccinated summer. Unfortunately, with the delta variant, we are having to recalibrate what we can do and still keep people safe. This outbreak happened despite highly effective vaccines,” Dean wrote in an email.

The internal CDC document obtained by The Post and published Thursday states that the delta variant is as transmissible as chickenpox and likely to cause more severe infections. That document also shows the CDC believes it needs to revamp its public communications strategy to stress the importance of vaccinations as the best way to crush the pandemic while acknowledging that breakthrough infections are more common than top health officials have indicated. 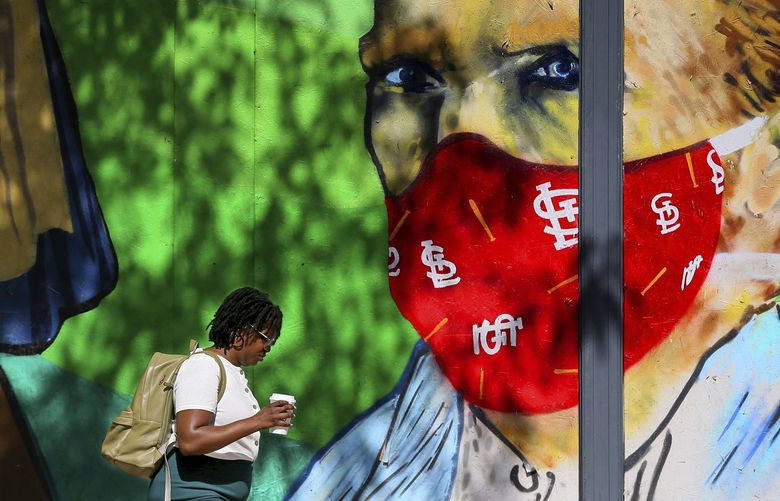 The Provincetown outbreak has all the hallmarks of a superspreader event, with infected people reporting to public health officials that they gathered in “densely packed indoor and outdoor events that included bars, restaurants, guest houses and rental homes.” The full outbreak, which began over the July 4 holiday weekend, is close to 900 cases, but the analysis included only a subset of 469 cases.

About three-quarters of infections occurred in people who were fully vaccinated, and that group had received vaccines from Pfizer-BioNTech, Moderna and Johnson & Johnson.

Scientists at the Broad Institute of MIT and Harvard, a research institute in Cambridge, Mass., involved in the genetic analysis of the outbreak highlighted that this was not a single event. At least five events sparked the outbreak, so it is not possible to blame it on one party or one bar.

“There’s no one person or spot to blame here,” said Daniel Park, group leader for viral computational genomics at the Broad Institute. “The thing that’s catching the attention in national public health is that you can have these types of events; there’s no one particular bar that did any worse than another.”

The scientists, along with officials at the Massachusetts Department of Public Health, reported that 79% of vaccinated breakthrough infections were symptomatic. Four of five people who were hospitalized were fully vaccinated.

They are now analyzing the genetic fingerprints of the virus samples taken to trace chains of transmission and determine how commonly fully vaccinated people were infecting one another. The presence of similar amounts of virus in the noses of vaccinated and unvaccinated people raises the possibility they are both contributing to spread, but many scientists think that vaccinated people should be less likely to spread the virus.

Similar findings may be emerging from other locations. The internal CDC document obtained by The Post showed that national surveillance found that vaccinated people had larger amounts of virus in their nose when infected with delta compared with other variants.

The CDC study “raises the very worrisome possibility that high viral loads can occur in people who have delta, and this is a fundamental as we have to approach the fall and winter,” said David O’Connor, a professor of pathology and laboratory medicine at the University of Wisconsin School of Medicine and Public Health.

While the vaccines remained highly protective against the worst outcomes, the new data may have implications for herd immunity, the threshold at which there is enough immunity to stifle community spread.

“Although most cases were not hospitalized, thus showing the vaccine works in an important way, this study is portentous for the achievement of herd immunity,” Andrew Noymer, an epidemiologist at the University of California at Irvine, said in an email. “If the vaccinated can become infected (and, we believe, from other studies, potentially spread covid), then herd immunity becomes more of a mirage than oasis.”

It also may intensify the debate about when and how long to implement mask guidance. The new study, as well as the internal CDC document obtained by The Post, both suggested that universal masking may be necessary to help stop spread of the virus. But the mask guidance issued this week only said that people need to use masks under certain circumstances, including high levels of virus in the community.

“We are at an inflection point, I’d say we are in a moment right now — a crossroads, a fork in the road where we can either try and take a road to end the pandemic or take a path that will prolong it,” said Pardis Sabeti, a geneticist at the Broad and Harvard University.

The study makes clear that vaccines offer significant protection, but do not prevent infection entirely even among the fully vaccinated. On July 3, the Massachusetts Department of Public Health reported a 14-day average of zero COVID-19 cases per 100,000 in Barnstable County — but by July 17, that number had increased to 177 cases per 100,000.

“This report demonstrates that vaccination against SARS-CoV-2 is not perfect, particularly in a setting with a highly contagious variant, in a large group in close contact, even if most are vaccinated against the virus,” said Gregg Gonsalves, associate professor at the Yale School of Public Health. “The good news here: If you’re vaccinated, refrain from large group gatherings and mask up, chances are good you’ll be OK. This is not 2020. But we’re not out of the woods.”