Skip to content
TRAFFIC
Blewett Pass closed due to a collision
By
Mike DeBonis
,
Jeff Stein
and
Tony Romm
The Washington Post

WASHINGTON — The White House budget office notified federal agencies on Thursday to begin preparations for the first shutdown of the U.S. government since the coronavirus pandemic began, as lawmakers on Capitol Hill struggle to reach a funding agreement.

Administration officials stress the request is in line with traditional procedures seven days ahead of a shutdown and not a commentary on the likelihood — or lack thereof — of a congressional deal. Both Democrats and Republicans have made clear they intend to fund the government before its funding expires on Sept. 30, but time is running out and lawmakers are aiming to resolve an enormous set of tasks to in a matter of weeks.

House Democrats earlier this week approved a measure to fund the government, suspend the debt ceiling, and approve emergency aid such as disaster relief. But that plan is expected to die in the Senate amid GOP refusal to support Democratic attempts to lift the debt ceiling. 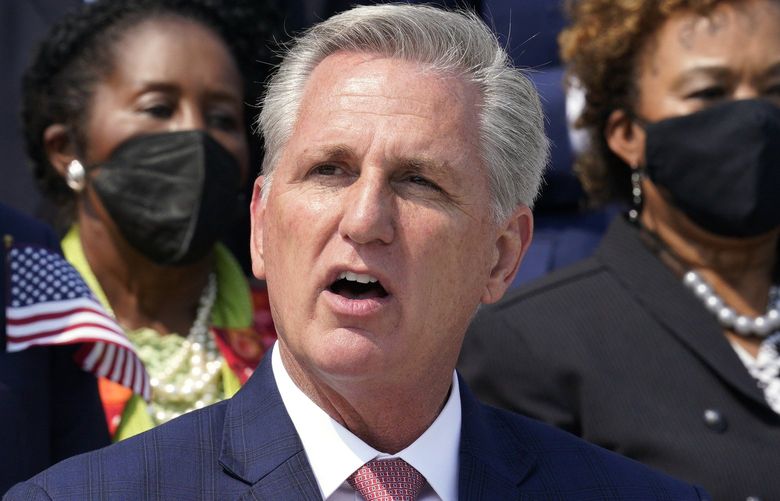 With the first of two major deadlines looming next week, Democrats publicly maintained the current course, pledging to put the House-backed bill before the Senate that would fund the government into December and allow the country to borrow freely throughout most of 2022.

“Every single member of this chamber is going to go on record as to whether they support keeping the government open and averting a default, or support shutting us down and careening our country toward a first-ever default,” Senate Majority Leader Charles Schumer, D-N.Y., said to open debate on the chamber floor.

Privately, though, Democrats also began to acknowledge they are unlikely to prevail in the face of a GOP blockade. Democrats have started discussing the mechanics of how to sidestep Republicans as soon as next week, according to lawmakers and aides, as they maintain they will not allow the government to shut down in a pandemic or the country to default for the first time in history.

“We’re looking at all the options, but a government shutdown is not acceptable,” said Sen. Chris Van Hollen, D-Md., a member of the chamber’s budget committee.

Many government functions are financed through spending bills that must be approved by Congress, including everything from the military to education programs, before one fiscal year ends and the next begins. Alternatively, lawmakers can pass short-term measures that sustain existing funding to buy themselves time. Absent that, the money runs out, resulting in a full or partial shutdown.

Missing the deadline doesn’t bring all government operations to an immediate halt, but it does require perhaps hundreds of thousands of federal employees to go home without pay. And many of the government employees who continue working because they are deemed “essential” will not be paid until Congress approves a new funding measure.

Then-President Donald Trump presided over the longest shutdown in U.S. history, a 35-day lapse that didn’t end until late January 2019. During that shutdown, Coast Guard families were told to consider holding garage sales to bring in extra income while they waited to be paid. Other federal employees sold personal belongings online to try to raise cash so they could pay their bills. Trump held out for more than a month, demanding that Congress approve money to build a wall along the Mexico border, but Democrats held firm. Trump eventually backed down when some air traffic controllers refused to come in to work without pay, delaying flights and triggering outrage.

The implications for a shutdown during a health pandemic, however, could be much different. Parts of the Centers for Disease Control and Prevention and the National Institutes of Health could even close if funding lapses, according to Bill Hoagland, a senior vice president at the Bipartisan Policy Center and former Republican staff director for the Senate Budget Committee. Hoagland said a very brief shutdown may occur but said he doubted it would go on for “any length of time” because of the implications.

“This would be the first shutdown during a declaration of national emergency,” Hoagland said. “In the midst of an ongoing pandemic and non-resolved issues related to the delta virus, to have a shutdown of some of the major federal agencies would add unbelievable complications to our ability to recover.”

Democrats are struggling to advance multiple spending measures all at once. In addition to the potential shutdown and debt ceiling problems, they have labored to advance roughly $4 trillion in economic initiatives backed by Biden, including a package set to come before the House next week that aims to improve U.S. infrastructure. The proposal is tied to a second, roughly $3.5 trillion bill to expand Medicare, boost education and child-care programs and combat climate change, which Democrats continued to construct on Thursday.

Speaking independently to reporters on Thursday, House Speaker Nancy Pelosi, D-Calif., and Schumer announced they had reached a framework agreement with the White House over how to pay for Democrats’ $3.5 trillion tax-and-spending measure. But they did not provide many details and Democrats continue to clash over which taxes to increase and which ones to avoid changing.

In a sign of the new scramble to avoid a shutdown, the Senate’s two top appropriators — Chairman Patrick Leahy, D-Vt., and top Republican Richard Shelby of Alabama — huddled Thursday to discuss issues potentially including a short-term agreement to keep the government funded. Such a measure could be moved independently of an increase in the debt ceiling, since Republicans including McConnell have previously expressed an openness to supporting such a solution.

But no such deal appeared in the offing, leading the White House Office of Management and Budget to notify agencies to review and revise their emergency plans for a shutdown.

“We fully expect Congress to work in a bipartisan fashion to keep our government open, get disaster relief to the Americans who need it, and avoid a catastrophic default, especially as we continue to confront the pandemic and power an economic recovery,” said Abdullah Hasan, an OMB spokesman, in a statement. “In the meantime, prudent management requires that the government plan for the possibility of a lapse in funding. Consistent with long-standing practice across multiple Administrations, OMB is preparing for any contingency, and determinations about specific programs are being actively reviewed by agencies.”