Rudy Giuliani gave a news conference Thursday in which, as he continued to cast doubt on the results of the presidential election, it appeared he was starting to melt.

Speaking from the headquarters of the Republican National Committee in Washington, Giuliani grew increasingly agitated as he expanded on the debunked allegations of widespread voter fraud that he has pursued since the election was called for Joe Biden earlier this month. About 40 minutes into his statement, his sweat began to drip in color.

By the time Giuliani began to take questions from reporters, the dark rivulets of liquid streaking down his face had become impossible to ignore, even as he pleaded with those present not to make light of his claims, for which he has yet to present evidence. 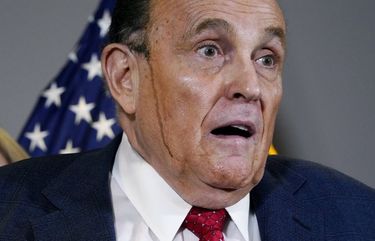 Fact-checking the wildest news conference of the Trump presidency

Many online commenters assumed that Giuliani was the victim of a bad dye job that was now seeping out under the bright lights of television. But several Manhattan hairdressers said that what was dripping down the face of the president’s lawyer was likely not hair dye.

“Hair dye doesn’t drip like that, unless it’s just been applied,” said David Kholdorov of the Men’s Lounge Barbershop and Spa, on Manhattan’s Upper East Side.

He explained that hair dye is typically mixed with peroxide during the dyeing process, and that once the solution oxidizes, the color adheres to the hair. No one would leave the solution in place in its raw form, he said, because the solution would irritate the scalp and could burn the hair or cause it to fall out.

Mirko Vergani, the creative color director at the Drawing Room, a salon in downtown Manhattan, said it was far more likely that Giuliani had used mascara or a touch-up pen to make sure his sideburns matched the rest.

“Sideburns are more gray than the rest of the head,” he said. “You can apply mascara to touch the gray side up a bit so it looks more natural.”

He said that anyone wishing to avoid what happened to Giuliani should avoid hot weather, and wait for the makeup to dry completely.

“In the picture, it looks really heavy,” Vergani said, referring to a photograph of Giuliani during the news conference. “I’m sure they put too much product and that’s why it started to bleed.”

Not everyone agreed. Gene Sarcinello, a stylist and colorist at Takamichi Hair, said that the streaks could have been caused by hair dye.

“If it’s not washed out properly, that’s what’s going to happen,” he said, adding that the dye could be spray-on. “Not knowing exactly what he has on his hair, it’s hair-color related definitely.”

“In some of the pictures I’m seeing, it looks glossy,” he said. “Which looks like a product in his hair.”

Giuliani’s hair has long been the subject of public discussion. When, in 2002, he abandoned what had been a signature comb-over, The Washington Post’s fashion critic, Robin Givhan, commended the move.

“Giuliani’s comb-over had reached mythic proportions as it was memorialized in comedy bits on virtually every television network and in countless caricatures,” she wrote. “One can only assume that its disappearance will send shock waves ricocheting from the studios of ‘Saturday Night Live’ to the corner barbershop.”

Thursday’s event was the latest in an unusual series of public appearances for Giuliani. On Nov. 7, he delivered remarks from the parking lot of Four Seasons Total Landscaping, a Philadelphia landscaping company close to a crematory and a pornography shop. Several weeks before the election he was compelled to deny he had done anything wrong after his appearance in Sacha Baron Cohen’s “Borat” sequel.

Giuliani, who has served as President Donald Trump’s personal lawyer for several years, has been one of the president’s closest allies in continued attempts to subvert the Electoral College process that delivered the presidency to Biden. Chris Krebs, the senior cybersecurity official who countered several of Trump’s false claims about the election and was subsequently fired by the president, tweeted Thursday that Giuliani’s conference was “the most dangerous 1hr 45 minutes of television in American history. And possibly the craziest.”

“If you don’t know what I’m talking about, you’re lucky,” Krebs added.

The New York Times reported Tuesday that Giuliani had asked Trump’s campaign to pay him $20,000 a day for his work overseeing the White House’s legal effort to overturn the election results. (Giuliani denied the report.) Thus far, his legal team has suffered a string of defeats in court.

Giuliani did not immediately return a request for comment.