DETROIT – President Donald Trump has invited the leaders of Michigan’s Republican-controlled state legislature to meet him in Washington on Friday, according to a person familiar with those plans, as the president and his allies continue an extraordinary campaign to overturn the results of an election he lost.

Trump’s campaign has suffered defeats in courtrooms across the country in its efforts to allege irregularities with the ballot-counting process, and has failed to muster any evidence of the widespread fraud that the president continues to claim tainted the 2020 election.

Trump lost Michigan by a wide margin: At present, he trails President-Elect Joe Biden in the state by 157,000 votes. Earlier this week, the state’s Republican Senate majority leader said an effort to have legislators throw out election results was “not going to happen.”

But the president now appears to be using the full weight of his office to challenge the election results as he and his allies reach out personally to state and local officials in an intensifying effort to halt the certification of the vote in key battleground states. 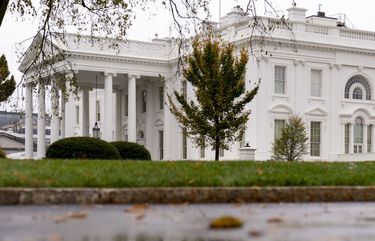 In an incendiary news conference in Washington, Rudy Giuliani, the former New York mayor who is now serving as Trump’s lead attorney, made baseless claims that Biden had orchestrated a national conspiracy to rig the vote.

Trump’s team appear to be increasingly focused on Michigan as a place where Republican officials – on the state’s Board of Canvassers and in the legislature – might be persuaded to overturn the results.

Earlier this week, Trump called a member of Wayne County’s Board of Canvassers after a contentious meeting in which she first refused, and then agreed, to certify election results from the state’s largest county. She subsequently released an affidavit seeking to “rescind” her vote for certification – a move that the secretary of state’s office said was impossible.

Legal experts condemned the president’s actions, saying he was trying to use the power of his office to alter the vote.

His concern was about my safety and that was really touching. He is a really busy guy, and to have his concern about my safety was appreciated.”
— Monica Palmer, speaking of phone call with President Donald Trump

“To bring the weight of the White House and the presidency onto an individual county canvassing board commissioner about what to do with certification is an incredible assault on the democratic process,” said Richard Pildes, a constitutional law professor at New York University. “No question about that.”

Joanna Lydgate, the national director of the Voter Protection Program, said “there is no basis in fact or law for failing to certify the election.”

“The president’s unpatriotic behavior is reaching new heights with summoning state legislative officials to the White House,” she said. “But the legislature has no role in certification, as its leaders have already publicly admitted. This raises serious legal and ethical concerns about the president’s conduct – but it will not alter the outcome of the election.”

Trump and his allies have spent the last week making baseless allegations of fraud in lawsuits, news conferences and tweets – seemingly probing to find a judge or an elected official who would accept them.

At the news conference in Washington on Thursday, Giuliani claimed without evidence that the campaign could roll back Biden’s wins in multiple states, including Michigan.

“It changes the result of the election in Michigan if you take out Wayne County,” he said. The county includes Detroit, the state’s heavily Democratic, majority-Black largest city.

Also on Thursday, Trump’s efforts seemed to have gained some traction, with the news that Michigan’s GOP leaders appear willing to meet with him.

The Detroit News reported that the state GOP legislative leaders who plan to visit the White House on Friday are Senate Majority Leader Mike Shirkey and House Speaker Lee Chatfield.

Earlier this week, Shirkey said that Biden is the president-elect, and that an effort to award Michigan’s electoral votes to Trump was “not going to happen,” according to the news outlet Bridge Michigan.

Shirkey’s office did not respond to requests for comment from The Washington Post. Gideon D’Assandro, communications director for the Michigan House speaker, declined to comment Thursday.

In Michigan, the high-water mark for Trump’s efforts came Tuesday night, during an hours-long meeting of the Wayne County board of canvassers. The board’s two GOP members voted against certifying the county’s results, which favored Biden by a large margin. But then, after three hours of angry comments from the public, the two GOP members changed their minds and voted to certify the results.

After the meeting, Trump called one of the two GOP members, Monica Palmer, who said Trump did not pressure her to change her vote.

“It was not pressure. It was genuine concern for my safety,” Palmer said.

Afterward, Palmer and the board’s other GOP member changed their minds again: On Wednesday, they signed affidavits saying they wanted to “rescind” their votes. The two said they were improperly pressured into certifying the election and accused Democrats of reneging on a promise to audit votes in Detroit.

William Hartmann, the other Republican on the board, has signed a similar affidavit, according to a person familiar with the document. Hartmann did not respond to a message from The Post.

Jonathan Kinloch, a Democratic member of the board, lamented the late attempt by Republicans to change their vote.

“They’re playing with the vote and the will of the people,” Kinloch said.

The Michigan secretary of state’s office, which oversees elections, said Thursday that there is no legal mechanism for Palmer and Hartmann to rescind their votes now. “Their job is done, and the next step in the process is for the Board of State Canvassers to meet and certify,” said Tracy Wimmer, a spokeswoman for Secretary of State Jocelyn Benson, a Democrat.

Palmer and Hartmann said they had agreed to certify Wayne County’s results on the condition that they be audited by state authorities, to resolve small errors in the counts of voters at some Detroit precincts. The number of votes affected is believed to be in the hundreds, far less than Biden’s margin of victory in Michigan.

On Thursday, Benson’s office said it would be conducting an audit of votes statewide and in Wayne County and other jurisdictions “where the data shows notable clerical errors” – but only after the election results are certified.

Palmer did not respond to questions asking whether that audit assuaged her concerns. She has said she does not doubt that Biden won Michigan but wants to be sure that clerical errors are fixed.

Also on Thursday, the Trump campaign dropped a lawsuit it had filed in federal court to block Michigan from certifying its election results. In explaining the move, Trump’s lawyers said – incorrectly – that the Wayne County board had voted not to certify the county’s results.

Meanwhile, in Arizona, there were signs of a potential delay in vote certification in one pro-Trump county.

Supervisors in rural Mohave County, a Republican stronghold bisected by the Grand Canyon, were set to canvass their county vote at a public meeting on Monday. Instead, they decided to delay their vote and take it up again Monday – the deadline for certification.

The supervisors agreed that they did not question whether the results in their own county were accurate. Instead, one GOP supervisor said, they wanted to show solidarity with the president’s challenges elsewhere.

“It has nothing to do with our results,” Supervisor Hildy Angius said in explaining her vote. “It’s more of a big-picture sort of thing.”

Chairwoman Jean Bishop initially voted to certify the vote on Nov. 16 but changed her mind, siding with those who wanted a delay.

“To not canvass our vote makes no sense unless you’re saying we’re trying to make a statement to support the state party. Which makes it sort of political – but I guess it is political,” she said.

The move to delay the vote was introduced by Supervisor Ron Gould, a former state senator who said he fear that canvassing the vote would foreclose Republicans’ options to challenge the statewide election results. “If we go ahead and canvass the election, then we’re saying we’re done, and that puts a different legal level on it,” Gould said at Monday’s meeting.

Trump trails Biden by more than 10,000 votes in Arizona. Secretary of State Katie Hobbs, a Democrat, has repeatedly defended the integrity of the election and said she will certify the statewide results.

The Washington Post’s Amy Gardner and Emma Brown contributed to this report.