Skip to content
By
MICHAEL BALSAMO
The Associated Press

WASHINGTON (AP) — The Justice Department’s inspector general is launching an investigation to examine whether any former or current department officials “engaged in an improper attempt” to overturn the results of the 2020 presidential election.

Inspector General Michael Horowitz said Monday that the investigation will investigate allegations concerning the conduct of former and current Justice Department officials but will not extend to other government officials.

The Justice Department watchdog investigation follows a report in The New York Times that a former assistant attorney general, Jeffrey Clark, had been discussing a plan with then-President Donald Trump to oust the acting attorney general and try to challenge the results of the 2020 race by falsely saying there had been widespread election fraud.

Senate Majority Leader Chuck Schumer demanded the inspector general launch a probe “into this attempted sedition.” The New York Democrat said it was “unconscionable a Trump Justice Department leader would conspire to subvert the people’s will.” 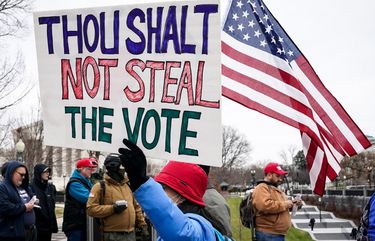 At Justice, Jeffrey Clark was considered unassuming. Then he plotted with Trump.

The watchdog’s probe is part of a growing number of efforts underway to investigate the attempts by Trump and his allies to subvert the election results. The moves culminated in a deadly Jan. 6 riot at the U.S. Capitol and a second impeachment of Trump, this time for inciting an insurrection. Also on Monday, the voting machine company Dominion Systems filed a defamation suit against Trump’s personal attorney Rudy Giuliani for his repeatedly false claims about widespread voting fraud in the election.

Election officials across the country, along with Trump’s former attorney general, William Barr, have confirmed there was no widespread fraud in the election. Republican governors in Arizona and Georgia, key battleground states won by Democrat Joe Biden, also vouched for the integrity of the elections in their states. Nearly all the legal challenges from Trump and his allies have been dismissed by judges, including two tossed by the U.S. Supreme Court.