WASHINGTON — As President Donald Trump flashed a quick tight-lipped smile from the steps of the White House overlooking the Rose Garden Monday, it looked like a victory lap of sorts was underway.

Two giant banners bearing the words “AMERICA LEADS THE WORLD IN TESTING” in all-caps were suspended from the White House columns. Testing machines and kits to detect the novel coronavirus had been carefully arranged on wooden tables flanking the president’s podium, which was set against a backdrop of American flags.

But the orchestrated opportunity for the president to boast about his administration’s efforts to ramp up testing backfired. Instead of reassuring Americans and being a celebratory event, the roughly hourlong news conference ended with Trump shutting down reporters’ questions and abruptly leaving the Rose Garden following heated exchanges with two female journalists, including one who seemed to imply that he made a racially charged comment toward her.

Soon, the news conference was trending on social media — for all the wrong reasons.

Monday’s contentious briefing followed weeks beset with challenges for Trump and his administration.

About three weeks ago, the president was ridiculed for suggesting that doctors should investigate injecting disinfectants into COVID-19 patients’ lungs at an April 23 coronavirus task force briefing. The next briefing was abruptly canceled, then rescheduled, as the White House scrambled to recover from the controversy.

Unemployment numbers reached their highest point since the Great Depression amid coronavirus shutdowns and the pandemic’s reach has continued to grow, killing more than 80,000 and sickening more than 1.3 million people in the United States.

And in recent days, the coronavirus finally infiltrated the White House, as Vice President Mike Pence’s press secretary, Katie Miller, and one of Trump’s personal valets tested positive. Some White House workers, including coronavirus task force member Anthony Fauci, have hunkered down in quarantine or partial-quarantine, and those who continue to go to work must wear masks. The president, however, will likely continue to go maskless.

Monday’s spotlight on the increased testing nationwide was meant to refocus attention on a Trump success story. But it only ignited another controversy for the beleaguered president.

The beginning of the news conference had the look and feel of a celebration. Reading from prepared remarks, the president touted the country’s testing effort, using grand descriptions such as “unmatched and unrivaled anywhere in the world” and directly contradicting criticism that not enough has been done to test Americans. At one point, Trump went as far to say, “We have met the moment and we have prevailed,” in terms of testing.

As of Sunday, the country had completed nearly 9 million coronavirus tests, but that impressive number only translates to about 2.7 percent of the population, The Washington Post reported Monday. And while the U.S. has ramped up testing in recent months, Trump’s claims that America now “leads the world” refers to the total number of tests completed, not per capita figures.

Still, that didn’t stop Trump from continuing to highlight his administration’s achievements, saying that he expected the U.S. would pass 10 million completed tests this week, “nearly double the number of any other country.”

Trump abandoned his script as he fielded tough questions from reporters, and his answers grew increasingly combative, culminating in a faceoff against Weijia Jiang of CBS News and CNN’s Kaitlan Collins.

The clash began with a pointed question from Jiang, who has tangled with Trump at briefings in the past.

“You’ve said many times that the U.S. is doing far better than any other country when it comes to testing,” Jiang said. “Why does that matter? Why is this a global competition to you if every day Americans are still losing their lives and we’re still seeing more cases every day?”

“Well, they’re losing their lives everywhere in the world,” Trump responded. He then suggested that Jiang, who is Chinese American, might be better off posing her question to China.

When Trump called on Collins for the next question, Jiang was caught on camera looking visibly irked. Collins appeared to notice Jiang too and instead of taking her turn, in a display of professional support, she ceded the floor back to her CBS News counterpart.

“Sir, why are you saying that to me specifically? That I should ask China,” Jiang said sharply, leaning forward in her seat and lowering her face mask.

“I’m not saying it specifically to anybody.” Trump said. “I’m saying it to anybody that would ask a nasty question like that.”

Ignoring the president’s attempt to brush her off, Jiang doubled down.

“That’s not a nasty question,” she said. “Why does it matter when Americans are dying?”

Jiang’s inquiry received no acknowledgment from Trump, who had already turned his attention to the other reporters.

But when Collins stepped up to the microphone, Trump did not appear interested in hearing from her anymore either.

“Next, next, please,” Trump said, prompting Collins to remind him that he had pointed to her.

“I did and you didn’t respond and now I’m calling on the young lady in the back,” the president said.

Collins remained undeterred. She began explaining that she had just wanted to let Jiang finish and did have questions for Trump, but before she could ask anything, the president cut in.

“OK,” Trump said, raising both his hands as Collins continued to protest. The president brusquely thanked everyone in attendance before turning away from the podium with his mouth fixed in a grim line and walking off.

After the tense back-and-forth between Trump and the reporters, #TrumpMeltdown and #RacistInChief trended on Twitter, largely fueled by the president’s critics.

He again played up the allegation that former President Barack Obama had behaved badly and broken an unspecified rule by criticizing the Trump administration’s handling of the coronavirus pandemic and suggested the previous administration was responsible for a miscarriage of justice in the Michael Flynn case.

Trump, who tweeted multiple times Sunday and Monday about “Obamagate,” declined to answer a question at Monday’s briefing to clarify what laws he believes his predecessor violated, or provide any evidence of wrongdoing. 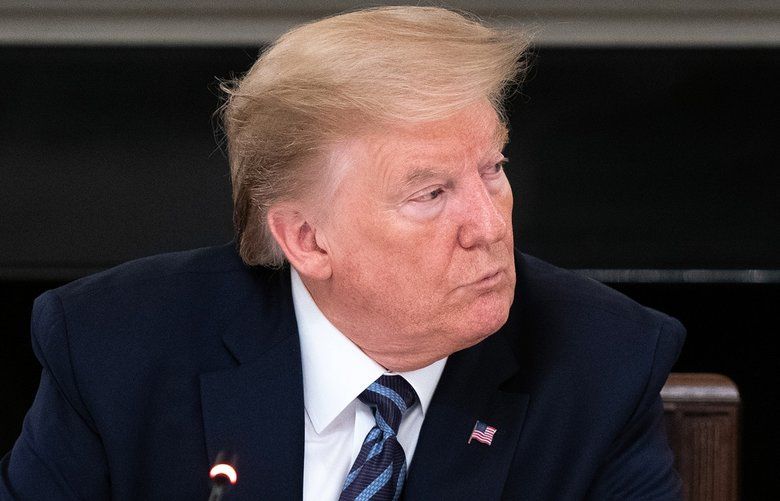 “You know what the crime is, the crime is very obvious to everybody,” he said in response to a question from The Post’s Philip Rucker. “All you have to do is read the newspapers, except yours.”

Trump later tweeted out a nine-minute clip from Fox News host Tucker Carlson’s Monday evening show that harshly criticized Obama administration officials and pinned it to the top of his Twitter profile.

The president finally addressed the tense end to the briefing when he ended the night with a tweet slamming journalists.

“The Lamestream Media is truly out of control,” he said, sharing a clip of his confrontation with Jiang. “Look how they work (conspire!) together. They are the Enemy of the People, but don’t worry, we will WIN in November!”

The unceremonious ending was still on Trump’s mind early Tuesday morning, when he logged on to social media again. He retweeted a White House aide cheering him on for walking away from reporters’ questions Monday afternoon.