Skip to content
By
CURT ANDERSON
The Associated Press

ST. PETERSBURG, Fla. (AP) — Twenty years ago, in a different time and under far different circumstances than today, it took five weeks of Florida recounts and court battles before Republican George W. Bush prevailed over Democrat Al Gore by 537 votes.

Today’s attempts by President Donald Trump and GOP allies to get unproven claims of fraud and voting irregularities into court in multiple states face a much steeper climb, legal and political experts say.

“There’s not a lot of similarities,” said attorney Barry Richard, who represented Bush in the 2000 saga. “In 2000, there was clearly a problem with the defective ballots. Nobody was claiming fraud or improprieties. It was all about how we made sure everybody’s vote counted.”

The Florida recount demanded by the Gore campaign famously centered on problems with outmoded punch-card ballots with canvassers trying to figure out a voter’s intent amid ballots with “hanging chads” and “dimpled chads” on the cards. The case wound up in the U.S. Supreme Court, which halted the recount and handed the presidency to Bush.

The Trump campaign, on the other hand, is filing multiple lawsuits in at least five states in which Democrat Joe Biden is ahead by tens of thousands of votes — a far cry from the mere hundreds of votes involved in 2000 in Florida.

“The most important difference in my mind is that Florida in 2000 was much closer than any of the states in 2020,” said Aubrey Jewett, a University of Central Florida political science professor who has written about the 2000 recount. 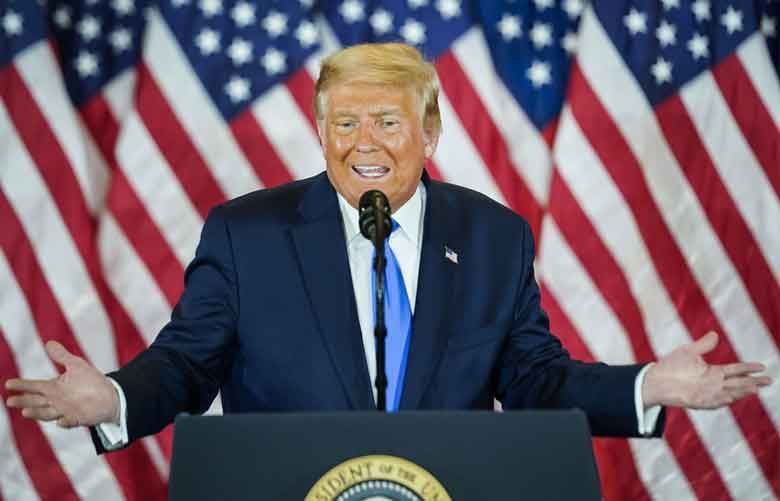 “Only about 2000 votes separated Bush from Gore in the initial results out of more than 6 million cast. Mathematically, it was entirely possible that a recount might overturn the results,” he said. “The margins even in the closest states are much larger this time around.”

Still, some Republicans point to the 2000 recount fight, which involved multiple court rulings, as justification for Trump to exhaust all legal means to contest what the president views as fraud in this year’s election.

“Twenty years ago, when Florida came down to a very thin margin, we saw Vice President Gore exhaust the legal system and wait to concede until December,” Senate Majority Leader Mitch McConnell of Kentucky said in a floor speech Monday.

“If any major irregularities occurred this time, of a magnitude that would affect the outcome, then every single American should want them to be brought to light,” McConnell added.

Republican U.S. Sen. Marco Rubio of Florida repeated in an online video Tuesday what many others in the GOP are saying; Trump has every right to contest the election and take action in the courts.

“One way this election is going to be widely accepted, which is what we need, is through the post-election process,” Rubio said. “Both Democrats and Republicans have used these laws themselves.”

A question that is far from clear is whether Trump’s lawsuits make sufficient claims for any of the cases to reach the U.S. Supreme Court, where his recent appointment of Justice Amy Coney Barrett gave conservatives a 6-3 majority.

Back in 2000, the Supreme Court decided that because Florida counties tallied ballots in different ways a statewide recount sought by Gore would violate voters’ rights under the Constitution’s equal protection clause.

Gore remembers the sense of finality when that ruling came down Dec. 12 of that year. He conceded to Bush a day later.

“There is no intermediate step between a final Supreme Court decision and violent revolution. And the Supreme Court interprets the laws. They issued an opinion. And to run the risk of violence in the streets without any change in the outcome seemed to me to be not in the best interests of the country,” Gore said in an NBC interview after Election Day this year.

Trump has hinted, and allies have backed him up, that he will never concede. Yet it’s a tall order for any of Trump’s legal claims to survive scrutiny in any court, much less make it to the Supreme Court, said Richard, the former Bush lawyer.

“I have read everything. I have looked at all the claims. None of them raise anything,” Richard said. “None of them have any credible evidence. It has to affect enough votes to change the result of the election.”

So far, Trump has filed challenges or recount demands in Pennsylvania, Arizona, Georgia, Michigan and Nevada. More may be coming.

Again, the Florida election debacle was quite different, Jewett said.

“Ïn 2000 in Florida there was quite a bit of evidence from the beginning that ballot design, mismarking ballots, and the different technologies used actually did have an impact on the voting,” he said.

“In 2000, Florida was the only state that was contested and neither candidate had 270 (electoral votes) without Florida,” Jewett said. “This time around Biden is over the 270 threshold and Trump would need to see a change in results in multiple states to claim victory.”