Former President Donald Trump has in the past week threatened electoral defeat for Republicans who dismiss his election falsehoods, inserted himself into the Virginia governor’s race to the delight of Democrats, and promised to root out disloyal GOP officials in legislative primaries in Arizona and Michigan.

With more than a year to go before the midterm elections, the former president is leaving no corner of the party untouched as he moves to assert his dominance, both in public and behind the scenes. His stepped-up efforts create a conundrum for many of the party’s strategists and lawmakers, who believe they could have a banner election year in 2022 if they keep the focus on President Joe Biden and his agenda.

But Trump has repeatedly turned the focus back onto the 2020 election. He moved into new territory Wednesday when he released a statement threatening the GOP with ballot-box repercussions if candidates do not embrace his false claims that the White House race was rigged.

“If we don’t solve the Presidential Election Fraud of 2020 (which we have thoroughly and conclusively documented), Republicans will not be voting in ’22 or ’24,” Trump said, part of a barrage of statements on the election and the Jan. 6 Capitol attack that he sent out this week. “It is the single most important thing for Republicans to do.”

The former president’s threat drew winces among GOP operatives and U.S. senators gathered for a donor retreat for the National Republican Senatorial Committee in Palm Beach, Florida, this week. Many still blame Trump for the loss of two U.S. Senate seats in Georgia in runoff elections early this year, saying his false claims of fraudulent ballots kept people from coming to the polls. 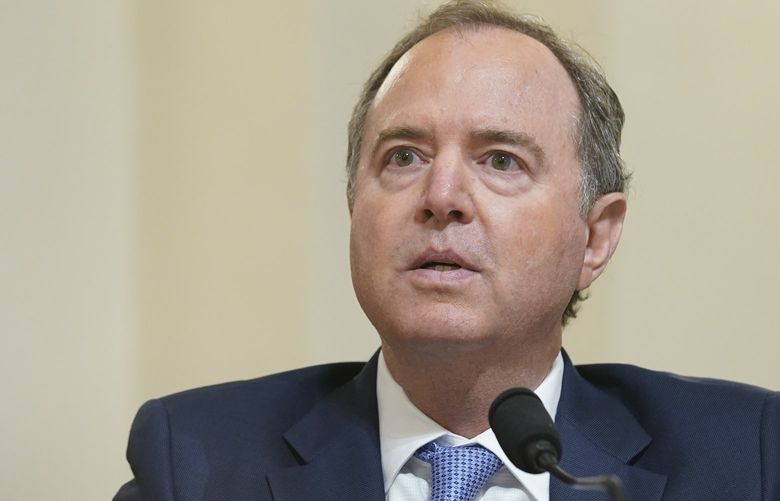 Trump’s not going away, but neither is Rep. Adam Schiff
Advertising

“It gives everyone cold sweats over the Georgia situation and the prospect he could have some impact again,” said one top party strategist, who like others interviewed for this report, spoke on the condition of anonymity to describe private conversations.

Already, many GOP candidates are following Trump’s lead, echoing false allegations that the election results were manipulated and raising the prospect that fraud will taint other elections.

In a private speech at the retreat Thursday, Trump cast himself as the GOP’s savior, saying he had brought the party back from the brink of disaster and helped Republicans hold seats on Capitol Hill — failing to mention that the party lost the White House and control of both the House and Senate under his presidency.

“It was a dying party, I’ll be honest. Now we have a very lively party,” he said, to a room of senators, donors and lobbyists, according to a recording of the event obtained by The Washington Post, before boasting of all the endorsements and telephone town halls he had done in the 2020 cycle.

He then railed against Republicans who had spoken negatively about him — naming Sens. Mitt Romney (Utah) and Ben Sasse (Neb.) at an event paid for by the Republican Senatorial Committee — and urged the party to “stick together,” with Trump as the de facto leader.

And he reiterated his claims that the 2020 vote was tainted by fraud, praising GOP-controlled states that have passed new voting restrictions since then.

“It’s a terrible thing what they did in Georgia and other states,” he said.

“You look at Texas, you look at a lot of states — they are correcting all the ways we were all abused over the last election … last two elections if you think about it,” Trump added.

In a statement Thursday, Trump spokesman Taylor Budowich said: “There is no one in the country that does more to increase voter engagement and participation than President Trump. Through his endorsements and massive Save America rallies, President Trump is single-handedly rebuilding the Republican Party at the ballot box.”

Republicans running in competitive general elections, such as Virginia gubernatorial candidate Glenn Youngkin, have been wary of tying themselves too closely to Trump’s claims about the 2020 election, while trying not to do anything that would spark Trump’s ire and turn off his supporters.

On Wednesday, Trump gave Youngkin a full-throated endorsement when he called into a small rally for the GOP ticket in Virginia headlined by former White House strategist Steve Bannon.

Youngkin did not attend or sponsor the event, which began with the crowd pledging allegiance to a flag that the emcee said had been flown at a rally for Trump on Jan. 6, when his supporters attacked the U.S. Capitol.

But Youngkin’s Democratic rival, former Virginia governor Terry McAuliffe, nonetheless pounced Thursday, calling on the Republican candidate to publicly denounce the act of pledging allegiance to “a flag that was used to bring down our country.”

“If that is the case, then we shouldn’t pledge allegiance to that flag,” Youngkin said later in response. “I have been so clear: There is no place for violence — none, none — in America today.”

Other Republicans worry that the debates over the 2020 election will bleed into election season next year, in a way that will hurt the GOP.

“Right now, if the party focuses on Afghanistan, inflation, the border, crime — we are going to win big,” said Rep. Don Bacon, R-Neb., who represents a swing district outside Omaha. “If the party wants to make it about the election is rigged, we will lose. Independent voters don’t respond well to that. If we keep the focus right, I think we’re going to win big in 2022.”

But Trump has been unrelenting, sending out a blizzard of statements attacking state and local officials in Arizona and Michigan who he claims have failed to investigate election irregularities.

“Hopefully, each one of these cowardly RINOs, whose names will be identified and forthcoming, will be primaried,” he said in one recent message about Michigan lawmakers, using an acronym for Republicans in Name Only.

He has also increasingly aligned himself with those who took part in the Capitol attack, recording a video this month to wish happy birthday to Ashli Babbitt, the rioter fatally shot by police. Trump called her “a truly incredible person” and called on the Justice Department to reopen its investigation into her death.

The former president has repeatedly raised the idea of the “rigged” election with candidates seeking his endorsement, and has backed a slate of GOP contenders across the country who back his claims.

Earlier this month, Trump threw his support behind a mayoral candidate in Hialeah, Florida, who told The Miami Herald that he believes there was “widespread fraud” in 2020, but that it is “very difficult to prove.”

GOP candidates across the country have been forced to answer questions on the topic. Former Vice President Mike Pence, who was threatened by a mob of Trump supporters on Jan. 6, has struggled about what to say about voter fraud since then, according to advisers and allies.

Other potential Republican presidential candidates have tried to thread the needle. In a speech to donors in California this summer, former secretary of state Mike Pompeo tried to nod at voter fraud without fully backing Trump’s claims, according to audio reviewed by The Post.

“It’s hard to figure out the math on that,” Pompeo says, according to the audio, when a donor asks him incredulously how Biden won. “These elections were imperfect. There’s no doubt about that.”

Much of the party’s power structure has given Trump leeway to prosecute his false election case, without explicitly endorsing it. The National Republican Congressional Committee is running ads on Facebook that fully embrace a Trump return to the White House, a clear sign that he commands the support of small-dollar donors.

“Trump won’t run for President unless we take back the House!” some of the spots declare. “There’s NO shot we win without your help.”

Another recent fundraising email from the group threatened donors who had not yet contributed, saying, “You’re a traitor. You abandoned Trump.” The message added that they would “be branded a deserter” unless they contributed to the House effort.

Some Trump advisers were livid about the email, saying the rhetoric was off-putting and could alienate supporters. “The tone was totally inappropriate,” one of them said.

The National Republican Senatorial Committee, meanwhile, has been offering donors the chance to get “Official Trump Majority Membership,” promising invites to a “closed-door, in-person strategy meeting with Trump” and asking people to add their names to petitions that show support of “Trump’s Social Media site,” even though Trump has not rolled out a new social media site.

“The president is going to headline our fall dinner. He remains the biggest draw in our party and we are happy he is helping our efforts to fire [House Speaker] Nancy Pelosi,” NRCC Chairman Tom Emmer, R-Minn., said Thursday in a call with reporters.

“The former president, he’s a private citizen,” Emmer said. “He, of course, is entitled to his own opinion.”

Some Trump allies have encouraged the Republican National Committee and party committees to make election fraud more of an issue in 2024, and the party has stepped up its “election integrity” efforts, hiring people in battleground states across the country. In a presentation to donors earlier this year, RNC Chairwoman Ronna McDaniel said “election integrity” was one of the party’s top priorities — and that the committee would be creating a program for 2022.

At the NRSC conference in Palm Beach on Thursday, donors and lobbyists were treated to a presentation on polling that showed Republicans were in a strong spot to take back the Senate, and that Biden’s poll numbers had dropped, particularly among independents, according to people familiar with research. The agenda did not include any panels on election fraud, but instead offered donors a golf session with Jack Nicklaus and discussions about how Republicans are performing on digital fundraising, foreign policy and infrastructure.

In Trump’s address, one of the final events of the retreat, the former president focused on re-litigating grievances he has retained since leaving office.

He called Pelosi, D-Calif., and Senate Majority Leader Chuck Schumer, D-N.Y., “maniacs” and described his presidency as a fight for survival.

“All phony stuff,” he said of the Democratic impeachment efforts and the investigation of his ties to Russia.

Unprompted, he brought up an unsubstantiated claim he had interactions with prostitutes in Moscow before he ran for president.

“I’m not into golden showers,” he told the crowd. “You know the great thing, our great first lady — ‘That one,’ she said, ‘I don’t believe that one.'”

After extensively praising Chinese President Xi Jinping for his intellect and touting his good relationship with Russian President Vladimir Putin, he also returned to his long-standing hatred of windmills, referencing a new plan by the Biden administration to expand the number of offshore wind turbines.

“It’s so sad when you see that they are approving these windmills — worst form of energy, the most expensive,” he said. “You talk about carbon emissions, well they are making them. More goes into the air than if you ran something for 30 years.”

When operating properly, wind turbines do not create carbon emissions as a result of electricity generation, according to the U.S. Energy Information Administration.