WASHINGTON — Three months ago, Rep. Pramila Jayapal, D-Wash., put Democratic House leaders and the White House on notice: Liberals will vote against an infrastructure bill prized by moderates unless a deal is sealed on legislation expanding the social safety net.

The leader of the Congressional Progressive Caucus (CPC) didn’t portray it as a threat, but simply the reality of the situation as roughly three dozen liberal House Democrats were not going to budge.

After weeks of negotiations, ultimatums and wheel spinning, that reality arrives this week as Democratic leaders work furiously to save the party’s agenda, which is tied up in two bills that would provide massive investments in bridges, roads and railroads as well as improving health care access, expanding education programs and fighting climate change.

The coming days will also prove a test of whether the hard stand Jayapal has taken for months will spur the deal she and her colleagues seek — or sink it. Heading into one of the most consequential weeks for Democrats in more than a decade, the third-term lawmaker insists she and her allies will not back down as they push policies they have long advocated and believe are close to becoming a reality.

If anything, her resolve is building as she says the number of lawmakers who will oppose the infrastructure bill set for floor consideration this week if it is not paired with economic spending bill favored by liberals has grown to about 60.

“I’m a dog with a bone. If I have an idea that I think is the right idea, I will keep pushing it,” she said in an interview at her Capitol Hill office. 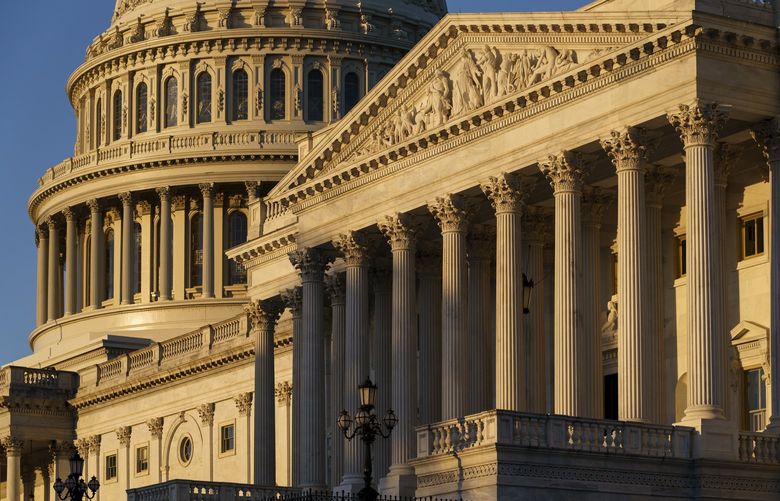 Jayapal has emerged as the most powerful House liberal by aggressively representing the priorities of her caucus and pushing leaders not to acquiesce to the demands of moderates in politically competitive districts whom liberals argue too often stand in the way of progress.

She also has the advantage of fighting for the agenda President Joe Biden has said he wants rather than playing the role liberal leaders have in the past of urging the party to go further than it feels comfortable on policies to expand the government’s role in areas such as health care, climate change and education.

This dynamic was brought home to Jayapal at the end of a meeting with the president in the Oval Office last week when she said Biden pulled her aside and handed her a speech he delivered in April endorsing all five planks of the CPC’s economic priorities — which are climate, housing, expanding health care access, lowering drug prices and immigration.

Jayapal — who did not endorse Biden in the primaries, saying he was too moderate — considered the gesture an acknowledgment of how much the progressive movement has influenced the White House. She asked Biden to sign the copy of his speech.

But that meeting with Biden also underscored where liberals’ agenda has stalled. Earlier that week it became clear a sweeping immigration plan to provide a path to legal residency for millions of undocumented immigrants is now all but dead.

It was a bitter setback for Jayapal who immigrated to the United States at 16 from India and lived with uncertainty as she hopped from one visa to another until she became a permanent resident. She wept as she expressed her disappointment to Biden and others in the room. But the moment also steeled her spine for the negotiations ahead on the social spending bill.

“I had the American Dream. And it is not there for the majority of people across this country,” she said. “What it means to me to be here is I have a chance to fight for people whose voices never get heard. I have a chance to be in rooms that nobody like me has ever been in.”

Having proved she will stand her ground, it will likely be Jayapal’s ability to compromise and figure out where it is most important to hold the line that will help determine whether the party can pass its agenda in the days ahead.

Jayapal said she was prepared for this moment by her mentor, Rep. Barbara Lee, D-Calif., who taught the former activist that if she wants to achieve anything in Congress she has to know what she is willing to give up. Lee also impressed upon Jayapal that being clear with leadership on where she stands and not surprising them late in the game is also key if she wanted to be a legislator and not a bombthrower.

These are lessons Jayapal said she has taken to heart, and leadership considers her a straight shooter even when disagreements grow tense, according to Lee, who has often seen Jayapal in conversation with Pelosi and other Democratic leaders.

Jayapal said she is quick to inform Pelosi of any concerns, such as the recent burst of anxiety when it was reported Sen. Joe Manchin, D-W.Va., would only accept a bill in the $1 trillion to $1.5 trillion range. She quickly called the speaker to warn that could mean priorities for her caucus, such as child care, could be gutted and was assured House leadership was not going to agree to that number.

“She answers my texts almost all the time unless she knows it’s something she doesn’t want to hear,” Jayapal said about Pelosi.

She also sees an ally in White House Chief of Staff Ron Klain, who she said understands that progressives are now a voting bloc Democrats cannot ignore. She frequently talks to Klain and other White House aides to keep them informed of where progressives stand and to solicit information on White House plans.

“I try not to criticize the White House, especially without a heads up. But if I think they’ve done something wrong, I’m gonna say something about it,” she said. “They have never — Ron in particular has been really clear with me, he wants me to be fair but he’s never in any way tried to get me not to say something.”

After years working as a civil rights and immigration advocate, Jayapal became the first Indian American woman to serve in the House of Representatives in 2016. She quickly climbed the ranks of the CPC’s leadership team, serving as co-chair of the caucus with Rep. Mark Pocan, D-Wis., in 2019. Both sought to establish a sense of collective action within the caucus that had previously been less organized and united than its centrist rivals, such as the Blue Dog Coalition.

“It’s not about any individual, but it’s about the collective activities of the caucus and she’s very cognizant of that,” Pocan said.

Since becoming the chairwoman earlier this year, Jayapal has applied the skills she learned as an organizer to the task of keeping members of her caucus focused on their goals even when anger flares at moderate Democrats’ opposition to certain policies advocated by the CPC.

“We always say, ‘Don’t get stuck on the recipe but talk about the brownie and how great the brownie is’ and she’s done a really great job in doing that,” said Rep. Ilhan Omar, D-Minn., who serves as the CPC’s vote counter.

While Jayapal has not received as much attention as other leading House liberals, such as Rep. Alexandria Ocasio-Cortez, D-N.Y., and Omar, she has won their trust.

Rep. Ayanna Pressley, D-Mass., recalls meeting fellow members of the liberal “Squad” for the first time at CPC freshman orientation and that Jayapal, who had just begun her second term in office, invited them all to her home for dinner. She has since served as a mentor since they all share the “blessing and responsibility of being a ‘first,'” Pressley said.

“I think members who came after her really see how successful she’s been. I mean she’s in the room negotiating on behalf of not just the Progressive Caucus, but on behalf of everyone who’s been marginalized shut out, and don’t have a voice,” Lee said.

I think members who came after her really see how successful she’s been. I mean she’s in the room negotiating on behalf of not just the Progressive Caucus, but on behalf of everyone who’s been marginalized shut out, and don’t have a voice.”
— Rep. Barbara Lee, D-Calif., a mentor to Jayapal

Jayapal considers herself part of the activist class who has rooted their career in charting the Democratic Party’s path toward a more progressive route, influencing leaders who did not consider immigration, wealth disparities or police reform issues of immediate concern.

While the tensions between House liberals and moderates have reached a fever pitch, Jayapal has tried to build a good relationship with centrists throughout the year.

Rep. Conor Lamb, D-Pa., said he became close with Jayapal as he and other Democrats from across the ideological spectrum worked together to draft compromise legislation to expand Medicare benefits.

“I think that that has been her biggest strength with this issue and others that I’ve seen is her willingness to step outside of the categories of progressive versus moderate and just say, let’s assemble the biggest team that we can on this issue, and try to drive it forward,” he said.

Rep. Susan Wild, a moderate Democrat from Pennsylvania, grew close with Jayapal under more trying circumstances. Both women were locked in the House chamber balconies along with several other Democrats as a mob of Trump supporters tried to force their way onto the floor during the Jan 6 attack on the Capitol.

On Jan. 7, Jayapal created a Signal chain to include all the people who huddled together in the balcony that day and has since planned several therapy sessions for the group to process the trauma.

The friendship has made it possible for them to respectfully argue about how Biden’s agenda should pass, with Wild reminding Jayapal that not passing an infrastructure bill would be politically perilous for moderates and could lead to Democrats losing the House in the 2022 midterms.

“Being in the House majority is a nice thing, and not getting an infrastructure bill through, I think, would be a major disappointment to a whole lot of people,” Wild said.

For now, Jayapal said she remains optimistic the priorities of the progressive caucus will be well represented in any final legislation despite the tense negotiations ahead.

To evaluate where those priorities stand, she recently asked her staff to go back and calculate how much of their demands were included in the social spending bill cobbled together by House committees this month. The answer was that 95% were included, 60% of which were included in full.

“That’s incredible,” she said. “So, how much of that can we keep, I don’t know what we can consider a win until we see the final thing. But if we make major progress on these five priorities that we laid out, that will be a win.”