WASHINGTON — As senators on Tuesday worked to unpack the security failures that led a pro-Trump mob to storm the Capitol last month, Sen. Ron Johnson, R-Wis., offered a wholly different take on what had happened: That “agent provocateurs” and “fake Trump protesters” were to blame.

Critics, including some within his own party, promptly slammed Johnson over his unfounded suggestions that the Jan. 6 insurrection had been a “jovial” protest and that the rioters who stormed the Capitol were not supporters of President Donald Trump.

“It’s disgraceful for a sitting Senator to spread disinformation so blatantly,” Rep. Adam Kinzinger, R-Ill., who has been an outspoken critic of Trump and his role in the insurrection, said on Twitter Tuesday evening. “It’s a disservice to the people he serves to continue lying to them like this. It’s dangerous and it must stop.”

As police officials testified about the intelligence lapses that allowed an armed group of insurrectionists to storm the Capitol on Jan. 6, Johnson repeated unfounded claims about the riot that have become a familiar refrain from those who want to minimize the event’s seriousness and distance the worst participants from Trump. 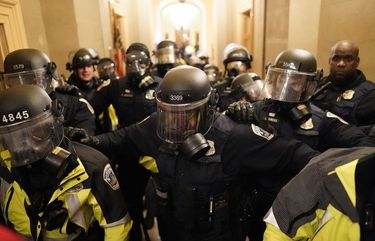 Quoting an article published on a far-right website, Johnson claimed that the “great majority” of protesters had a “jovial, friendly, earnest demeanor” and blamed the violence that turned deadly on “plainclothes militants, agent provocateurs, fake Trump protesters, and disciplined uniformed column of attackers.”

In fact, more than 200 rioters have been criminally charged by federal prosecutors, including many who have self-identified as Trump supporters and who have documented ties to far-right extremist groups. Federal officials have said there is no substantial evidence of left-wing provocation or that antifascist activists posed as Trump supporters during the riot.

“As our hearing concludes, I want to make one thing clear: ‘provocateurs’ did not storm the Capitol. They were not ‘fake Trump protesters.’ The mood on January 6th was not ‘festive,'” Klobuchar tweeted on Tuesday. “That is disinformation.”

As our hearing concludes, I want to make one thing clear: ‘Provocateurs’ did not storm the Capitol. They were not ‘fake Trump protesters.’ The mood on January 6th was not ‘festive.’ That is disinformation.”
— Tweet from Sen. Amy Klobuchar, D-Minn.

The backlash to Johnson’s claim was swift. The senator’s name trended on Twitter Tuesday evening, and a clip of the CNN broadcast that aired his comments had been viewed more than 1.7 million times on Twitter by early Wednesday morning.

Wisconsin Lt. Gov. Mandela Barnes, a Democrat who may run for Johnson’s Senate seat in 2022, said he was not surprised by the senator’s speech.

“Expect the expected,” he tweeted Tuesday evening. “Same man who fear mongers with unsubstantiated immigration claims, suggests that health care, food, and shelter are privileges, and continues to dismiss the virus. This is who we know.”

Rep. Mark Pocan, D-Wis., said Johnson was “a small step away from blaming Bigfoot, the Loch Ness Monster and Hodag’s (have to be from WI to know this reference) for the act of sedition on January 6.”

(The hodag is a fictional monster with a needled tail and sharp fangs dreamed up by a Wisconsin huckster.)

Johnson is not the only conservative who has sought to raise doubts about the motives of the Capitol rioters and the damage done on Jan. 6.

Conservative commentator Dinesh D’Souza joined Laura Ingraham on Fox News Tuesday night to baselessly suggest that the riot was little more than “a bunch of rowdy people walking through a hallway,” and to belittle the congressional staff who have sought therapy following the violent insurrection. Fox News host Tucker Carlson suggested Monday night that there is “no evidence that white supremacists were responsible for what happened on Jan. 6,” despite evidence that members of hate groups and dozens of people on the FBI’s terror watch list were in D.C. during the riots. Interviews with Capitol police officers have also revealed that rioters hurled racist slurs during the attack.

Despite those efforts, videos taken on Jan. 6, evidence surfaced by law enforcement officials and testimony at Tuesday’s hearing have illuminated what happened when Trump’s supporters stormed the Capitol.

“There is clear agreement that this was a planned insurrection, and I think most members here very firmly agree with that and I think it is important for the public to know that,” Klobuchar said at the close of Tuesday’s hearing. “This was planned, we now know this was a planned insurrection. It involved white supremacists, it involved extremist groups, and it certainly could have been so much worse except for the bravery of the officers.”