WASHINGTON — Usually, it takes at least one full day in Cancún to do something embarrassing you’ll never live down.

But for Sen. Ted Cruz, R-Texas, it took just 10 hours — from when his United plane touched down at Cancún International Airport at 7:52 p.m. Wednesday to when he booked a return flight back to Houston around 6 a.m. Thursday — for the state’s junior senator to apparently realize he had made a horrible mistake.

Cruz landed back home in Texas almost exactly 24 hours after he departed, saying he was ready to take on the devastating winter storm that has left millions of Texans without power or safe drinking water and left dozens of people dead in the southern United States.

But his brief tropical sojourn yielded at least two unflattering nicknames on social media — Cancún Cruz and Flyin’ Ted — and prompted a Twitter-fueled news cycle that seemed to unite a broken nation. 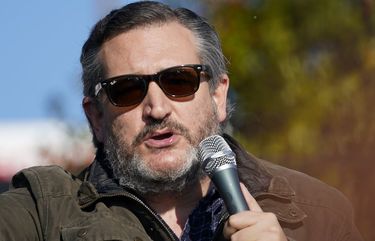 The international kerfuffle began organically enough, when photos surfaced online Wednesday night of a masked Cruz and his wife, Heidi Cruz, waiting at a gate to board a flight to Cancún.

“Well Senator Cruz is flying to Cancun while millions of Texans do not have electricity #Priorities #ThanksforNothingSenator,” wrote one Houston-based Twitter user, above a photo of Cruz looking like any airport traveler in the middle of the coronavirus pandemic.

The reaction online was instantaneous, and also disbelieving: Could it . . . really be . . . that Ted Cruz — the senator from a state in the middle of a once-in-a-decade national weather emergency — was just peacing out to Mexico?

Cancun-gate checked nearly every possible box of a scandal. The sad-sack black roller suitcase and oversize canvas tote, awaiting its beach debut! The fleece half-zip as part of the classic frumpy Dad ensemble! The 6 a.m. scramble to book a return flight! The politician seeming to blame his preteen daughters! The adorable family dog, possibly left home alone! The police escort! The leaked text messages, with a “Real Housewives of Houston” mood!

And the hypocrisy of a man who has trashed fellow politicians for vacationing during crises — vacationing in Cancún during a crisis himself.

Cruz’s Cancún jaunt proved to be ideal for a frivolous Twitter pile-on, with ample opportunities for crowdsourcing, amateur sleuthing and vicious mocking — all playing out Thursday in real time, as the country spent another day trapped in front of their screens.

After the initial photos surfaced — and Cruz’s office remained curiously silent — Punchbowl’s Jake Sherman added a clue to the ledger when, shortly after 10 a.m. Thursday, he posted a screenshot of an “R. Cru” — the senator’s full name is Rafael Edward Cruz — on the list awaiting an upgrade for a flight from Cancún to Houston.

Soon after, Cruz’s team released a statement from him that, after some outrage about the situation back home in Texas, offered a Blame-the-Kids strategy masquerading as an Upstanding-Parent defense.

“Like millions of Texans, our family lost heat and power too,” Cruz wrote. “With school cancelled for the week, our girls asked to take a trip with friends. Wanting to be a good dad, I flew down with them last night and am flying back this afternoon. My staff and I are in constant communication with state and local leaders to get to the bottom of what happened in Texas.”

Then, again, the plot thickened. Just after noon, Edward Russell, the lead airlines reporter at Skift, a travel industry publication, tweeted that a source of his at United Airlines had informed him that “Senator Ted Cruz rebooked his flight back to Houston from Cancún for this afternoon at around 6 a.m. today (Thursday). He was originally scheduled to return on Saturday.” Russell’s scoop was later confirmed by NBC News, among others.

Just when the situation seemed like it couldn’t get much worse for Cruz — his statement about coming back Thursday, after all, had been misleading at best — a cute pooch entered the narrative. Houston-based journalist Michael Hardy had driven by Cruz’s house Thursday and snapped a photo of the front of his home — lights off, tiny white fluff ball staring out of the glass front door.

“Also, Ted appears to have left behind the family poodle,” Hardy tweeted, before later offering an addendum: “Just to clarify, this was taken around 1 pm central on Thursday. It’s possible Ted brought the poodle back from Cancún with him, or that a family member was staying behind to take care of the dog.”

Hardy later wrote in New York Magazine — in an article titled “Ted Cruz Abandons Millions of Freezing Texans and His Poodle, Snowflake” — that after he shared the photo of the Cruz’s dog on Twitter, “all hell broke loose.”

A Ted Cruz’s Poodle account popped up on Twitter, retweeting the NBC story about Cruz’s initial plan to stay through the weekend and writing, “I was left with a bathtub of water & a bucket full of kibble so Saturday sounds about right.”

And so, by early afternoon, what Cruz no doubt had hoped would be a discreet flight back home had turned into a national walk of shame, with each step of his return journey documented and scrutinized and widely lampooned.

There was his arrival at the Cancún airport where, clad in a Texas flag mask and gray polo shirt, Cruz repeated his initial cover story. “Yesterday my daughters asked if they could take a trip with some friends, and Heidi and I agreed, so I flew down with them last night, dropped them off here, and now I’m headed back to Texas, and continuing to work to try to get the power on,” he said. “What’s happening in Texas in unacceptable. A lot of Texans are hurting.”

His deplaning in Houston was also chronicled in near-real time, with a cellphone video following along as Cruz walked up the ramp with two police escorts. And he was greeted by reporters and photographers when he returned home, all eager to document each step of his poor decision-making.

On Thursday evening, text messages among some of Cruz’s neighbors emerged, showing Heidi Cruz growing increasingly frustrated with the power outage at their home and inviting the text group — known as the “lovelies” — to join them on a possible trip to Cancún, where they planned to stay at the Ritz Carlton Cancún.

“Our house is FREEZING,” Heidi Cruz wrote to the group, adding that their family “couldn’t stand it anymore” and had to stay elsewhere the night before. She also shared information for flights departing Houston on Wednesday and returning on Sunday.

The text messages — which were first reported by The New York Times — were provided to The Washington Post by American Bridge, a Democratic group, and confirmed by a recipient on the text chain who spoke on the condition of anonymity to discuss the private conversation.

The leaked text messages added an element of pathos to the already rich narrative of the trip. Group text chains, after all, are among the most intimate and sacred forms of communications, and if you can’t trust your “friends” not to leak them, then who can you trust?

Playing the villain is nothing new to Cruz. In 2013, he helped shut down the government, and the next year, in the weeks before Christmas, he attempted a repeat performance, forcing the Senate into a rare weekend session that recalled all its members — furious with Cruz — back to Washington.

In 2016, former House speaker John Boehner of Ohio, a fellow Republican, called him “Lucifer in the flesh,” and Sen. Lindsey Graham, R-S.C., quipped, “If you killed Ted Cruz on the floor of the Senate, and the trial was in the Senate, nobody would convict you.”

Longtime Cruz chroniclers say they generally view the Texas senator as a method actor, one who fully commits to the bit, consequences be damned. He is the sort of man who seems to delight in getting himself hated in Washington, booed in Cleveland (at the 2016 Republican convention) and, this week, shamed into fleeing Cancún.

Yet by Thursday night, even Cruz seemed chastened. Speaking to reporters outside his home, he offered an explanation that doubled as a mea culpa.

“From the moment I sat on the plane, I began really second-guessing that decision and saying, ‘Look, I know why we’re doing this, but I’ve also got responsibilities,'” he said. “Leaving when so many Texans were hurting didn’t feel right, and so I changed my return flight and flew back on the first available flight I could take.”

He reiterated that the trip was as the urging of his daughters, but he seemed also to take responsibility.

“Look, it was obviously a mistake,” Cruz said. “In hindsight, I wouldn’t have done it. I was trying to be a dad.”

And in that moment — clad in a Patagonia puffer jacket, unshaven and slightly haggard, seeming equal parts exhausted and exasperated and even perhaps a bit contrite — Ted Cruz did, in fact, look a lot like a dad.

The Washington Post’s Amy B Wang contributed to this report.