A commissioner in Lake County, Ohio, whose government office was used to plug a private laptop into the county network during the spring primary, said Tuesday that he was not aware of an attempt to breach the local election board’s computers.

John Hamercheck R, president of the Lake County Board of Commissioners, spoke publicly for the first time about the incident, which is under investigation by the FBI and state officials.

State and county officials have determined that no sensitive data were obtained on May 4, when a private laptop was plugged into the county network inside Hamercheck’s office, as The Washington Post previously reported. But routine network traffic captured by the computer was circulated an August “cyber symposium” on election fraud hosted by MyPillow executive Mike Lindell, an ally of former president Donald Trump.

On Tuesday, reading from a prepared statement at the board’s regular meeting, Hamercheck said there has been “much false or misleading information” about what occurred, but he did not elaborate. 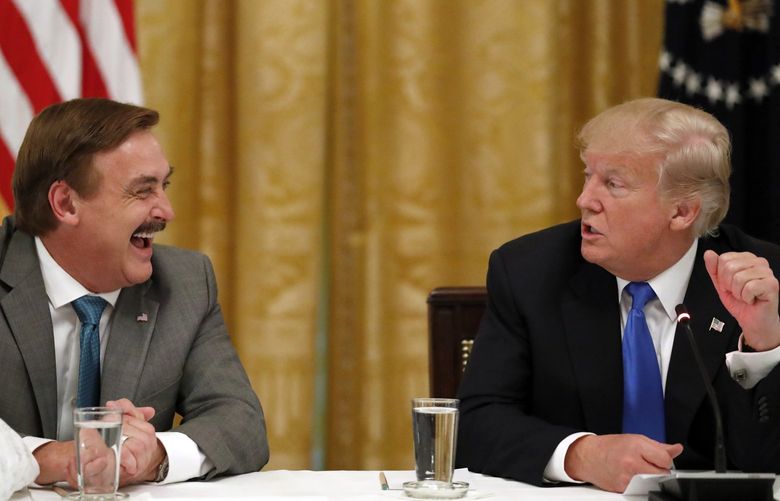 “To my knowledge,” Hamercheck said, “there was never an attempt to access or breach the Lake County Board of Elections computer network that day.”

The commissioner said he has not been interviewed by any agencies investigating the incident. He pledged to share more information with the public “as soon as we are finished gathering and verifying the appropriate materials.”

The Lake County incident bears striking similarities to events in Colorado earlier this year, when government officials helped an outsider gain access to the county voting system in an effort to find fraud.

Ahead of both instances, county officials in the two locales – including Hamercheck – discussed claims of election fraud with Douglas Frank, an Ohio-based scientist who has done work for Lindell, according to people familiar with Frank’s role who spoke on the condition of anonymity to describe private discussions. Data obtained from both localities were distributed at the conference hosted by Lindell.

Frank, who has claimed to have discovered secret algorithms used to rig the 2020 election, has been traveling the country trying to convince election officials that the vote was riddled with fraud – and that they should join the effort to uncover it, he told The Post in a series of interviews. In an interview last week, Frank said he did not remember speaking to Hamercheck or have any record of the call.

County records obtained by The Post through a public-records request show that Hamercheck, an engineer and retired police officer, used his security badge to swipe into the fifth floor offices multiple times during the roughly six-hour period when, according to the leaked data, the laptop was intermittently connected to the county network.

An FBI spokeswoman confirmed last week that the bureau is investigating the incident in Lake County but declined to comment further. Investigators are trying to determine whether someone on the fifth floor of the Lake County government building improperly accessed the computer network and whether any laws were violated.

Investigators with the office of Ohio Secretary of State Frank LaRose, R, believe a government official appears to have facilitated the attempted breach of the election network in Lake County, a spokesman for LaRose said last week.

“Some of you might say, to use basketball terminology, ‘No foul here,'” Osborn said. “Well, there was a foul here. There was a breach coming from John Hamercheck’s office.”

She added: “In my mind, this was something very inappropriate for an elected official in Lake County.”

Osborn asked the other two commissioners, Ron Young and John Plecnik, if they would consider censuring Hamercheck for his role in the incident.

Young responded that it was premature to consider a censure while investigations are underway.

“We have very sophisticated, very skilled law enforcement – nationally, state level, locally – working on this issue,” Young said. “And I think it’d be absurd for me to stand up and offer some sort of censure of this gentleman, who at least from my observation has always performed ethically, morally and properly.”

The Washington Post’s Emma Brown contributed to this report.