ORLANDO, Fla. — Democratic California Gov. Gavin Newsom’s $100,000 Fox News ad on Monday urging Floridians to “join the fight” against Republican Gov. Ron DeSantis “or join us in California” has drawn a muted response from state Democrats and dismissals from Republicans.

But it’s just the latest signal that as DeSantis’ national profile as a potential GOP presidential candidate increases, he can expect more attention from national Democrats and possible presidential opponents, whether in 2024 or 2028.

“It’s an acknowledgement that DeSantis is a is a serious political threat to the Democrats,” said Aubrey Jewett, a professor of political science at the University of Central Florida. “… It’s an acknowledgment from Newsom, and probably a lot of Democrats, that unless the political situation changes, DeSantis may be marching to reelection and then on towards the Republican nomination. And so the thought is, start attacking now. Don’t wait till it’s too late.”

In his ad, Newsom says, “It’s Independence Day. Let’s talk about what’s going on in America. Freedom is under attack in your state.”

Above images of DeSantis, including a photo of his shaking hands with former President Donald Trump, Newsom says, “Your Republican leaders? They’re banning books, making it harder to vote, restricting speech in classrooms, even criminalizing women and doctors.”

Newsom was referring to several controversial bills and measures pushed by DeSantis and the state over the past few years, including the state rejecting math textbooks over perceived “critical race theory,” the so-called “don’t say gay” bill that limits instruction of sexual orientation or gender identity in schools up to the third grade and “age-appropriate” instruction in higher grades; and the 15-week abortion ban signed in Kissimmee by DeSantis.

The ad also cited U.S. Sen. Rick Scott’s proposed voting bill to require all ballots be counted within 24 hours of Election Day, which critics argue would disenfranchise military members and others living overseas.

“I urge all of you living in Florida to join the fight or join us in California, where we still believe in freedom, freedom of speech, freedom to choose, freedom from hate and the freedom to love,” Newsom concludes. “Don’t let them take your freedom.”

Newsom’s ad goes after DeSantis using his own “freedom” branding. DeSantis has called Florida “freedom’s vanguard” and “the freest state in America,” and even named this year’s budget “Freedom First.”

“Newsom has decided that … instead of just getting attacked by DeSantis, that he is going to counterattack and he’s going to lay out a different description of what DeSantis is doing,” Jewett said. “… Newsom is using that to question, freedom for who? And freedom for what?”

DeSantis spokesman Dave Abrams told Politico that Newsom “might as well light a pile of cash on fire,” adding that Californians are leaving “the hellhole he created in his state to come to Florida.”

National Republicans sounded the same tune, with Republican National Committee spokeswoman Julia Friedland responding, “It was very nice of Gavin Newsom to foot the bill and remind Floridians just how much they don’t want to move to California.” 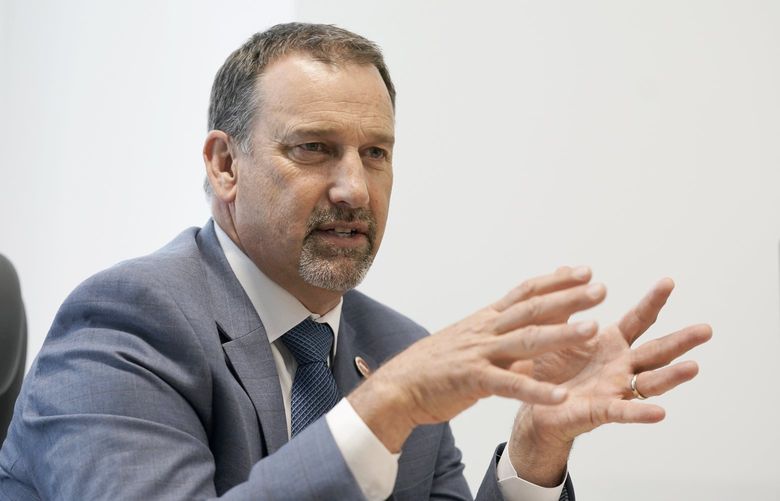 Much of the RNC’s pushback to Newsom was not on the issues mentioned in the ad, other than calling California “a safe haven for those seeking free abortions on demand” because of the push to codify abortion rights in the state.

Instead, the RNC largely criticized what it called its “draconian” COVID restrictions. Newsom and California became a kind of boogeyman for conservatives opposed to anti-COVID measures, with DeSantis boasting at an event in Orlando last month that he refused to wear a mask on a visit there in 2021 despite the state’s mandate at the time.

But the sentiment has gone the other way as well, with “Don’t DeSantis my California” becoming a slogan there during the unsuccessful attempt to recall Newsom last year.

As of Tuesday morning, Florida Democrats haven’t said much about the ad.

Agriculture Commissioner Nikki Fried, who is running for governor to take on DeSantis in November, wrote on Twitter, “Thanks, but I’ve got him @GavinNewsom. I’ll beat him in ‘22 for Florida and the rest of the country.”

Fried’s opponent in the Democratic gubernatorial primary, U.S. Rep. Charlie Crist, had no comment about the ad.