Amy Klobuchar is scrambling to hire for basic jobs that other campaigns filled months ago, including “Nevada operations director.” She had no campaign bus in Nevada, so staffers had to drive the one in New Hampshire 2,700 miles to get there. She lacked expertise on the Nevada caucuses, so her Iowa specialist has been put on the task.

In a sense, the senator is living the dream of the underdog candidate: Klobuchar, D-Minn., transformed an electric debate moment into an unexpected third place finish in New Hampshire, catapulting her overnight into the top tier of Democratic candidates.

But as she seeks to turn that magic moment into something more, the question is whether it’s too late and the challenge too big. “We’re putting the airplane together as we’re flying it,” said one adviser, who spoke on the condition of anonymity because the person was not authorized to speak publicly.

The problems are not just logistical. Fourteen states will vote on Super Tuesday, March 3, when one-third of all delegates are selected, and as that date approaches, it is not clear whether Klobuchar has the resources or the networks to compete.

She struggles especially to connect with African American voters, and black activists say she has made little effort. The campaign in recent days had to ask a former Democratic official for a list of black churches in South Carolina, which votes a week after Saturday’s Nevada caucuses.

“Where’s Amy?” Roland Martin, a prominent black political analyst, posted on his Instagram account recently. “If she wants black votes, she has to talk to black people.”

Klobuchar’s plight underlines the muddle that has overtaken the Democratic primaries: It features several candidates with some strengths, stubborn weaknesses and no obvious path forward. Wednesday’s debate will provide another test, and Klobuchar could face particular pressure given how her last debate performance powered her current boost.

The Klobuchar campaign is working feverishly to catch up. Her staffers spent hours over the weekend hashing out a strategy for Super Tuesday, debating whether it’s worthwhile to compete in big, delegate-rich states like Texas and California. That’s “a little bit more difficult” given “the sheer dollars” required, said one Klobuchar adviser.

Some advisers want her to focus instead on independent-minded states that aren’t overly liberal, like Maine and Tennessee, because they might be receptive to her centrist message. But those states, of course, yield much fewer delegates.

Still, the campaign has clearly gotten a shot of adrenaline for the first time since she announced her candidacy on a snowy day a year ago. She raised more than $12 million since the last Democratic debate, the event that helped her outperform two better-known candidates, former vice president Joe Biden and Sen. Elizabeth Warren (D-Mass.), in the New Hampshire primary.

Klobuchar’s staff has sought to embrace its threadbare condition as a virtue, noting that the wooden apple boxes Klobuchar sometimes uses as a stage were made by a campaign aide with carpentry skills. The campaign’s on-the-ground team assembles lighting and sound for events, a role for which most big campaigns hire professionals.

“From the beginning of this campaign, she has been understaffed and under-resourced compared to the other leading candidates,” said Norm Sterzenbach, a top Klobuchar adviser. “So the strategy is always going to be to find moments that she can capitalize on to build momentum that leads into the next piece and the next piece. So it’s going to be, for a little while, step by step for her.”

Most of Klobuchar’s new cash is going toward bulking up her TV and digital ads, including a new Spanish-language spot running in Nevada. The campaign also has touted putting 50 paid staffers in Nevada, 25 in South Carolina and at least one in each Super Tuesday state.

Unlike most of her rivals in the top tier, Klobuchar heavily relies on press interviews – “free media,” in campaign-speak – to drive her message. In January, Klobuchar did at least 23 cable TV interviews on weekdays alone, according to data compiled by Media Matters.

In the same stretch, former South Bend, Ind., mayor Pete Buttigieg did five interviews, Warren did four and Sen. Bernie Sanders, I-Vt., and Biden appeared once, according to the group’s data. And that’s not counting the Sunday political TV shows, which Klobuchar tries not to turn down.

This brighter spotlight is imposing pressures that might not have materialized before her surge. On Friday, Klobuchar spent precious time in Nevada explaining why, as a senator, she backed a 2007 amendment striking down a requirement that federal agencies publish material in languages other than English.

She has since disavowed that stance. “I did vote that way – but way back then, along with many other people,” Klobuchar said. She was one of 17 Democrats to back the measure, but others in the race, including Biden and Sanders, opposed it.

And in a televised interview with Telemundo, Klobuchar was unable to name the sitting president of Mexico, Andrés Manuel López Obrador.

Buttigieg, who has been criticized by Klobuchar for lacking experience, took a shot at her, saying, “I guess what it says is that there is more to being prepared than how many years you spend in Washington.”

A political action committee aligned with Warren’s campaign also saw an opportunity, blasting out an email calling Klobuchar “not prepared” and saying New Hampshire voters had made a “terrible mistake.”

Campaign veterans say a quick rise like Klobuchar’s can be intoxicating but perilous. “You really go through a phase of feeling like you’re just so happy to be here, because you didn’t know if you would make it,” said John Brabender, who was a top adviser to former Republican senator Rick Santorum’s 2012 presidential campaign, which unexpectedly shot to the lead in Iowa.

The problem, Brabender said, is that it leaves little time for crucial planning. “There are problems she’s going to face. They can’t look at states way down the road,” he said. “You’re looking at just probably the next two weeks at a time.” (Santorum was forced to drop out four months after the Iowa caucuses.)

Klobuchar will have her home state vote on Super Tuesday. She is adding staff in Minnesota as she battles with Buttigieg and Warren for the white, college-educated voters that fuel their campaigns.

Klobuchar has spent three years quietly introducing herself to party leaders, speaking at Democratic Party dinners in nearly half of the states over the past three years. Now she’s hoping some of that pays off.

In Colorado, a Super Tuesday state, Democrats were “leaning forward and nodding” as she spoke at a September 2018 dinner, according to an account in the Durango Herald. In Tennessee, Klobuchar was interrupted by applause as she bemoaned monopolistic drug pricing in May 2017, according to the Knoxville News Sentinel.

Her outreach to nonwhite voters, however, has been more troubled. For more than eight months, the Color of Change coalition – a 1.7 million-member nonprofit organization focused on criminal and economic justice issues related to minorities – has been unable to arrange a meeting with Klobuchar, said Rashad Robinson, who heads the group.

“It’s really surprising,” he said, adding that Buttigieg, Warren and Sanders have all spoken with him multiple times. “I take away from it that they’ve felt it isn’t important, that they haven’t prioritized engagement and outreach with the community. It’s probably not smart to just ignore a constituency that’s going to be very critical.”

The Klobuchar campaign is trying to schedule a sit-down with Robinson and the senator, according to a campaign aide.

A Monmouth University poll conducted between Iowa’s caucuses and the New Hampshire primary showed that Klobuchar was supported by just 1 percent of nonwhite respondents. Her support among black voters was nearly nonexistent in a Washington Post-Ipsos national survey last month of African Americans, and a Virginia Monmouth poll conducted after her strong showing in New Hampshire found Klobuchar had zero percent support among black likely primary voters, compared with 14 percent among whites.

Klobuchar supporters say black voters will support her once they know her better, though that has not always been the case with other candidates who have said the same thing.

“Amy has said she’s got to go and earn the support of those voters, since she’s not as well-known as some of the other candidates in the field,” Justin Buoen, her campaign manager, said Monday on MSNBC. He added that Klobuchar fares better with nonwhite voters in Minnesota, where they know her.

She has made frequent visits to Nevada, touching down there about a dozen times during the campaign. But she opened her Las Vegas headquarters only in late November, months after most of her rivals, with just two paid staff members.

The buzz generated by her New Hampshire success has helped make up for that somewhat. More than 500 people turned out to see Klobuchar at an evening rally Thursday in Las Vegas; the next day, she attracted more than 1,000 people in Reno.

West said Klobuchar appears to be emerging as an alternative to Warren for female voters: “Most of my friends are like, ‘I’m not sure which one’s first and which one’s second, but I’m voting for those two first and then somebody else.’ “

Speaking to reporters outside an early-voting site in East Las Vegas, Reid cited her campaign as an example of what is possible in politics and why he’s not telling any campaign to fold its tents.

“People kept saying, ‘Why is she in the race?’ Well, she had two great debates and now she’s running second in a number of different polls,” said Reid. “So we should just not be forcing people out. Let them run the course.” 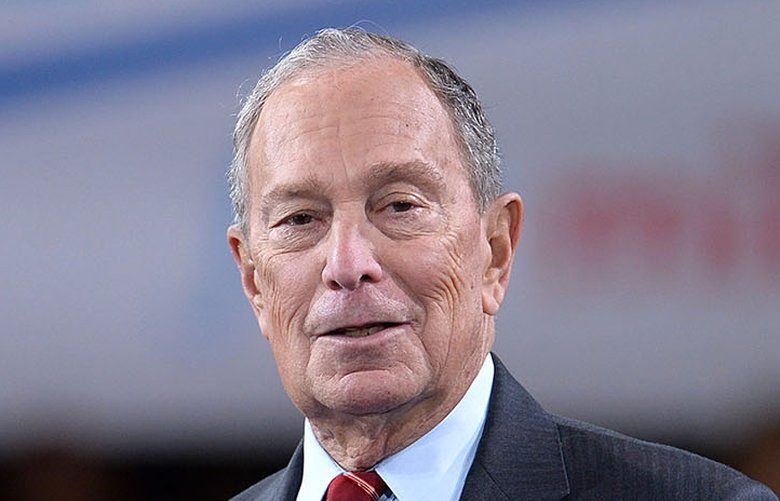 Related: More from the campaign

Bloomberg qualifies for Wednesday's debate, his first
This story was originally published at washingtonpost.com. Read it here.