WASHINGTON — Images of a U.S. border agent on horseback appearing to whip a Haitian migrant were “horrible to watch” and unacceptable, White House press secretary Jen Psaki said on Monday.

“I don’t think anyone seeing that footage would think it was acceptable or appropriate,” she said at a press briefing.

A Reuters video showed a Border Patrol agent using what the news agency described as a lariat to whip at a Haitian migrant trying to enter the United States from Mexico. The El Paso Times reported Monday that an agent “menacingly swung his reins like a whip.” 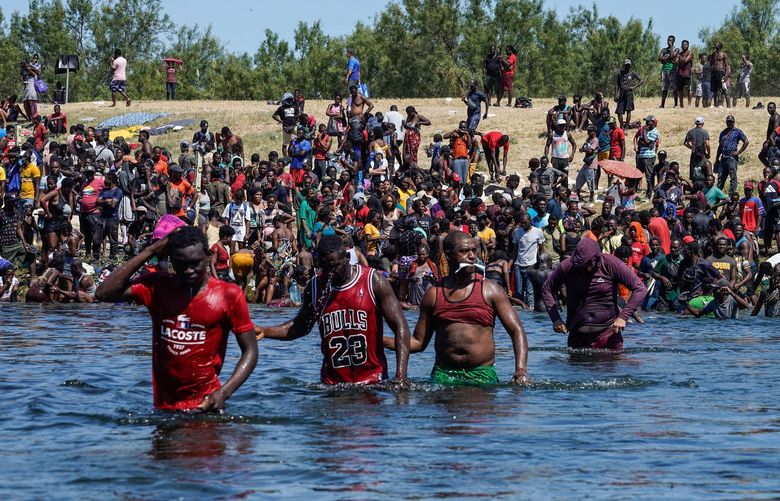 The reports and photographs of the scene set off a wave of criticism on social media. Rep. Ilhan Omar, D-Minn., who came to the United States as a refugee from Somalia, condemned the tactic as “human rights abuses, plain and simple.”

Psaki said she needed more information on the incident before she could say whether any action would be taken against the border agent.

“We just saw this footage. It’s horrible to watch. I just have to get more information on it,” she said.

“I can’t imagine the scenario where that would be appropriate. I’m certainly not suggesting that, but we’ve just seen the footage earlier this morning,” she said.

Psaki said agents “should never be able to do it again.”

The Department of Homeland Security said Saturday that it was deploying 400 additional agents to the Del Rio sector after thousands of migrants from Haiti crossed into the United States through Mexico.

The administration has accelerated removal flights for deportations under Title 42 of the U.S. Code, which allows for the rapid expulsion of migrants based on the potential spread of disease. Former President Donald Trump used the code to deport migrants during the COVID-19 pandemic, a policy that has been continued by the Biden administration.

Psaki repeatedly cited the policy, but she also asserted the administration’s commitment to ensuring humane treatment of migrants arriving at the border before their deportation.

“Any circumstance where individuals are not treated humanely — whether they’re coming to our border or not — is not in line with the Biden administration policies,” she said.