WASHINGTON – Less than two years before Marjorie Taylor Greene became a member of Congress, she walked the halls of a congressional office building with a few men searching for a new Democratic congresswoman from New York named Alexandria Ocasio-Cortez.

A deleted video from February 2019 unearthed by CNN shows Greene arriving at Ocasio-Cortez’s office door to find it locked. She, and the men with her, then taunt the congresswoman’s staff through a mail slot and defile her guest book, all while mocking Ocasio-Cortez.

One of the men in Greene’s group, Anthony Aguero, was inside the U.S. Capitol on Jan. 6 when supporters of former president Donald Trump stormed the building, according to CNN. In the 2019 video, Greene says more conservatives should come to Washington and confront lawmakers.

“I mean, this is a woman that’s deeply unwell. And clearly needs some help,” Ocasio-Cortez said Friday when asked about the video. “Her kind of fixation has lasted for several years now.”

Greene defended the video as taxpayers “walking around and talking to lawmakers.” She also continued to label Ocasio-Cortez and other congresswomen of color as terrorists and the “JihadSquad.” Greene claimed that she was the real victim of harassment. 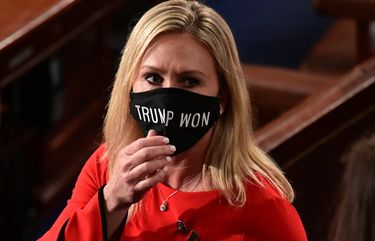 The video has surfaced days after Greene, now a Republican congresswoman from Georgia with full rein of the Capitol, verbally accosted Ocasio-Cortez outside the House chamber Wednesday and derided her for ignoring Greene’s demand that the two women debate.

On Friday, tensions surrounding Greene continued to run high when her spokesman, Nick Dyer, had a heated confrontation with Rep. Eric Swalwell, D-Calif., over the congressman wearing a mask indoors. Dyer says he used a “jovial tone” when he told Swalwell, “Biden said you can take off your mask.” The congressman then confronted Dyer and used an expletive, telling the aide not tell him what to do.

The two incidents with Ocasio-Cortez are also reminiscent of another video of Greene that showed her harassing a teenager outside the Capitol. David Hogg, who became a national gun control advocate after a mass shooting at his high school in Parkland, Fla., was on Capitol Hill to meet with lawmakers.

Earlier this year, after social media posts surfaced of Greene seemingly endorsing the execution of Democratic politicians, the House voted to strip her of her committee assignments but did not vote to expel her as some Democrats have demanded.

In tweets responding to the video, Ocasio-Cortez accused House Minority Leader Kevin McCarthy, R-Calif., of protecting Greene and wrote that if she behaved like Greene, the Republicans “would be calling for my expulsion.”

In the video, Greene talks to the camera as they approach Ocasio-Cortez’s office.

“We’re your employers, we’d like to come in and inspect your office,” one of Greene’s friends says through the mail slot.

“You can’t stay in there forever. Can you come out and play?” a man says.

The group eventually gives up, claiming security had warned the office ahead of time that they were coming. Before the video shuts off, Greene says they’re going to visit two other freshman Reps. Ilhan Omar, D-Minn., and Rashida Tlaib, D-Mich., the first Muslim women elected to the House and two members of what is known as the “Squad” with Ocasio-Cortez.

“Hey, look as a woman I do not want to have to wear a burqa one day,” Greene says. “I want to ask them what they are thinking and why they’re serving in our American government. They really should go back to the Middle East.”

She also says that she’s bringing a Bible and is planning to ask them to retake their oath of office because they swore in on the Koran.

The Washington Post’s Felicia Sonmez contributed to this story.