The U.S. protesters inspired by the self-styled “Freedom Convoy” that occupied downtown Ottawa for weeks headed out from Southern California last week for a cross-country trip to the D.C. region. They plan to arrive this weekend, and Virginia State Police describes the convoy as a “still-fluid situation.” Here’s what is happening:

– What is the ‘People’s Convoy,’ and when is it coming?

The People’s Convoy, a U.S.-based group of activists opposed to vaccine mandates, is on a cross-country trip aiming to arrive in Hagerstown, Md., on Friday before targeting the D.C. Beltway area on Saturday. Washington County Public Schools in Hagerstown announced that students would be dismissed 2½ hours early on Friday because of expected traffic congestion caused by the convoy.

– How large is the convoy?

Despite organizers touting numbers in the thousands, Capt. Ron Galaviz, a spokesman for the Indiana State Police, said the convoy consisted of fewer than 300 vehicles when it arrived in Indiana this week – and a majority were passenger vehicles, not large trucks. 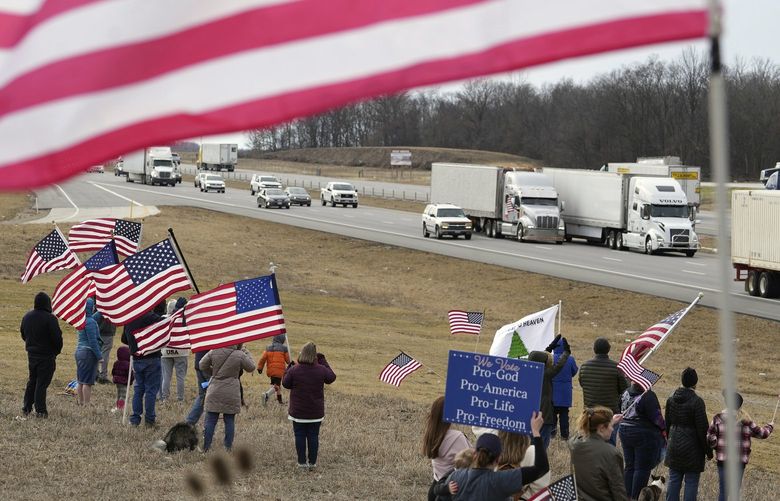 By the time the convoy left and headed toward Ohio on Thursday, Galaviz estimated there were about 550 vehicles, mostly cars or pickups but also about 160 semi tractors or tractor-trailers. Those estimates are consistent with what Ohio State Highway Patrol authorities are seeing as the convoy heads to Lore City, Ohio, said Sgt. Brice Nihiser.

Supporters have been joining and leaving throughout the trip, making it difficult for officials to predict the size of the group before it reaches a given region.

“People would reach a destination point and decide, ‘OK, I’m far enough’ and go home, and then more would join along the way,” Sgt. Christopher Watson, a spokesman for the Illinois State Police, said of the convoy that traveled through his state earlier this week. “It varied widely, and so we had to adapt on the fly quite a bit.”

The convoy is on Day 9 of its 11-day journey, traveling from Monrovia, Ind., to Lore City, Ohio. Supporters from other states, including in the Northeast region, have posted their own routes on social media in hopes of meeting up with the group when it arrives in the Washington area.

Social media posts showed people waving American flags on the side of a highway for a Northeast contingent of People’s Convoy drivers coming through Pennsylvania. But Pennsylvania Department of Transportation officials monitoring traffic did not notice anything unusual throughout the day, said Fritzi Schreffler, an agency spokeswoman.

There was about a mile of vehicles driving south on Interstate 81, approaching Franklin County, Pa., on Thursday night, which Schreffler estimated may be the convoy.

– What will they do when they get there?

Organizers have emphasized that they have no plans to go into D.C., but they have not publicized what they will do when they arrive or how long they will stay. Organizers say they are on a “peaceful and law-abiding transcontinental journey.”

– What are they protesting?

Throughout the cross-country trip, People’s Convoy organizers have rallied people by calling pandemic restrictions and mandates an infringement on their freedoms, even as many of those measures at the federal and local levels have been blocked or rescinded.

Brian Brase, a convoy organizer, said the group wants an end to the national emergency declaration in response to the coronavirus – first issued by President Donald Trump in March 2020 and later extended by President Joe Biden – and for Congress to hold hearings investigating the government’s response to the pandemic.

Still, this movement in the United States, like the Ottawa protests, appears fueled by far-right extremists and conspiracy theorists, extremism researchers said. The convoy demonstrators’ hostility toward the vaccine mandates is just one of several anti-government, far-right beliefs held by people in this broader movement, they said. .

Organizers disagree with that characterization and have tried to frame the convoy as bipartisan. But speeches, rallies and flags are full of pro-Trump and anti-Biden rhetoric.

– How is the region preparing?

The possibility of a caravan of trucks and cars has heightened security, drawing in police agencies from Maryland and Virginia to monitor the Beltway.

D.C. police spokesman Dustin Sternbeck said the department’s posture has not changed since additional security was ramped up in the days ahead of Tuesday’s State of the Union address, and the Civil Disturbance Unit remains activated as a precautionary measure.

Police officers from New York City, who came to assist U.S. Capitol police for the State of the Union, remain in the District, a spokesman for that agency said. He would not say when they are scheduled to depart.

Sternbeck said D.C. officers remain stationed along highway entrances to the District and some exit ramps, along with trucks from the Department of Public Works, in case roadways need to be blocked or traffic diverted.

Police declined to say specifically what they might do should the convoy try to enter the District. “It is fair to say we would explore all mitigation options,” Sternbeck said.

Authorities note that large trucks are barred from many D.C. streets, with regulations restricting where they can park and how long they can idle.

Virginia State Police said they are monitoring and preparing for “potential commercial and passenger vehicle convoys affecting traffic” this weekend, calling it a “still-fluid situation.” As they prepare for this weekend, the agency said in a statement that people can expect to see a larger presence of Virginia troopers and other safety teams. Maryland State Police also said the agency is working with regional authorities to monitor the situation.

The Washington Post’s Justin Jouvenal contributed to this report.