WASHINGTON – Around 7 p.m. on Jan. 5, less than 24 hours before an angry mob overran the U.S. Capitol, an FBI bulletin warning that extremists were calling for violent attacks on Congress landed in an email inbox used by the District of Columbia police Department. That same evening, a member of the Capitol Police received the same memo.

But the alert was not flagged for top officials at either agency, according to congressional testimony Tuesday – deepening questions about the breakdowns that contributed to massive security failures on Jan. 6.

Both acting District police chief Robert Contee III and former Capitol Police chief Steven Sund said the intelligence community at large failed to detect key information about the intentions of the attackers and adequately communicate what was known in the run-up to the Capitol riot.

“I would certainly think that something as violent as an insurrection at the Capitol would warrant a phone call or something,” Contee told lawmakers. 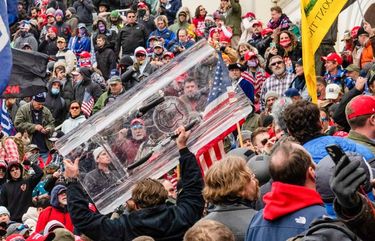 Sund cast the Capitol Police as a “consumer” of intelligence from 18 federal agencies.

“If they were finding efforts that this was a coordinated attack, that had been coordinated among numerous states for some time in advance of this, that’s the information that would have been extremely helpful to us,” Sund said, adding, “That type of information could have given us sufficient, advance warning to prep, plan for an attack such as what we saw.”

But Tuesday’s joint hearing by two Senate committees also spotlighted the stark warnings that were issued before Congress met in a joint session to formalize Joe Biden’s victory.

One came in the form of the Capitol Police’s own intelligence report three days before the attack, as The Washington Post first reported. In a 12-page memo, the agency’s intelligence unit warned that “Congress itself” could be targeted by angry Trump supporters who saw the electoral college vote certification as “the last opportunity to overturn the results of the presidential election.”

Two days later, the FBI alert issued by its field office in Norfolk, Va., described how “an online thread discussed specific calls for violence to include stating ‘Be ready to fight. Congress needs to hear glass breaking, doors being kicked in, and blood from their BLM and Pantifa slave soldiers being spilled.’ “

BLM is a common reference to the Black Lives Matter movement for racial justice. Pantifa is a derogatory term for antifa, a far-left anti-fascist movement whose adherents sometimes engage in violent clashes with right-wing extremists.

“Get violent,” the online thread continued, according to the bulletin. “Stop calling this a march, or rally, or a protest. Go there ready for war. We get our President or we die. NOTHING else will achieve this goal.”

Separately, dozens of people on a terrorist watch list were in the District on the day of the riot, including many suspected white supremacists, as The Post previously reported.

“There were clearly intelligence issues with information that was out there that didn’t get to the right people, actions that weren’t taken,” Sen. Amy Klobuchar, D-Minn., chairwoman of the Rules and Administration Committee, told reporters during a break in the hearing.

The FBI said in a statement Tuesday that the Norfolk, Va., report was shared with the Washington Field Office’s joint terrorism task force within 40 minutes and discussed inside a command post there. It was also posted on the Law Enforcement Enterprise Portal, which is available to law enforcement officers nationwide, the bureau said.

The deluge of incendiary threats online, law enforcement officials have said, has made it difficult to distinguish aspirational boasts from actual public safety concerns.

But Sen. Gary Peters, R-Mich., chairman of the Homeland Security and Governmental Affairs Committee, said the mayhem that engulfed the Capitol on Jan. 6 made clear that law enforcement cannot become inured to threatening chatter on social media.

“The federal government must start taking these online threats seriously to ensure they don’t cross into the real-world violence,” he said.

The internal Capitol Police memo concluded that Jan. 6 was shaping up to be a perfect storm of dangerous elements – the large size of the expected crowds, the likelihood of demonstrators bringing deadly weapons and the proximity of the protests to Capitol grounds. Promoting all of this chaos and violence: “President Trump himself,” the memo noted.

“Supporters of the current president see January 6, 2021, as the last opportunity to overturn the results of the presidential election,” according to the memo, portions of which were obtained by The Post. “This sense of desperation and disappointment may lead to more of an incentive to become violent. Unlike previous post-election protests, the targets of the pro-Trump supporters are not necessarily the counter-protesters as they were previously, but rather Congress itself is the target on the 6th.”

Two people familiar with the memo, who spoke on the condition of anonymity to describe security preparations, said the report was conveyed to all Capitol Police command staff by the intelligence unit’s director, Jack Donohue. The report said organizers were urging Trump supporters to come with guns and specialized combat gear, including gas masks and military-style bulletproof vests called “plate carriers.”

But Tuesday, former Capitol security officials said the intelligence did not point with enough specificity to the potential for an attack on the complex.

“The intelligence was not that there would be a coordinated assault on the Capitol, nor was that contemplated in any of the inter-agency discussions that I attended in the days before the attack,” former House sergeant-at-arms Paul Irving said in a written statement to the committees, adding that the Capitol Police assessed the potential for civil disobedience and arrests as “remote” or “improbable.”

The FBI report pointed to organized plans that were underway, including individuals sharing a map of the Capitol complex’s tunnels and designating places in Kentucky, Pennsylvania, Massachusetts and South Carolina where extremists could gather before heading to Washington.

“As of 5 January 2021, FBI Norfolk received information indicating calls for violence in response to ‘unlawful lockdowns’ to begin on 6 January 2021 in Washington, D.C.,” the document read.

The Jan. 5 warning was shared with the field office in the District, and within an hour, officials in a command post there were briefed, FBI Assistant Director in Charge Steven D’Antuono has said. He also has said the document was shared through a joint terrorism task force that includes representatives from the Capitol Police, District police and other law enforcement agencies.

During Tuesday’s hearing, Contee said the FBI bulletin went to an email account that “is not something that is a moderated list, 24 hours a day that would generate an immediate response.”

“I assure you that my phone is on 24 hours a day, seven days a week, and I’m available for any phone call from any agency that has information with respect to something of this magnitude happening in our city,” he added.

Contee also stressed that the FBI warning was “raw information” that was not “wholly vetted.” District police were preparing for a “large violent demonstration” similar to previous pro-Trump rallies, Contee said, adding that “the intelligence did not make it where it needed to be.”

For his part, Sund said that in the previous 24 hours, he had learned for the first time that the Capitol Police had also received the FBI bulletin. It went to an official assigned to the joint terrorism task force, who “reviewed it and then forwarded over to an official at the intelligence division over at U.S. Capitol Police headquarters,” he said. Sund said he never saw the report himself, nor did the top security officials in the Capitol, the House and Senate sergeants-at-arms.

FBI Director Christopher Wray and then-acting attorney general Jeffrey Rosen also were not briefed on the Norfolk document because it was considered raw intelligence, and investigators had not identified those behind the online posts. Internally, some officials have wondered whether the threats were not taken more seriously because the rallygoers were White conservatives loyal to Trump.

Others have said widespread criticism of law enforcement’s heavy-handed approach to racial justice protests over the summer caused them to tamp down their response to the warnings about potential unrest on Jan. 6. On the eve of the rally, District Mayor Muriel Bowser, a Democrat, sent a letter to Rosen, Army Secretary Ryan McCarthy and acting defense secretary Christopher Miller, asserting that unless federal law enforcement was coordinating with District police, she “discourages” them from patrolling District streets the next day.