President Donald Trump’s virtual town hall on Fox News on May 3 sounded like an oral reading of our Trump database of false or misleading claims. There were so many old chestnuts, from his false claims about NATO spending to his tale that the United States has spent $8 trillion on Middle East wars to his ahistorical bragging that he had built the greatest economy in the history of the world.

But the president’s favorite foil is his predecessor, Barack Obama. Anything Obama did is inherently suspect, in Trump’s telling, and anything Trump has done is surely superior.

We’ve covered many of these in the past, such as his attacks on Obama’s successful handling of the swine flu pandemic. But here are two repeated claims that we have not had the opportunity to unravel previously. We will deal with them quickly in this roundup, so we won’t be awarding Pinocchios.

This talking point emerged in April, with Trump often saying “the cupboard was bare,” referring to the Strategic National Stockpile, a repository of emergency medicines and supplies created in 1999 in case of enemy attacks. In 2003, the stockpile’s mission was expanded to prepare for a possible pandemic.

On its face, calling the cupboard empty might seem like a strange assertion because Trump has been president for three years, so he bears some responsibility for what was in the stockpile and whether it was appropriate for a pandemic. “The stockpile has grown and evolved to a greater than $8 billion enterprise,” wrote Greg Burel, the director at the time, in November 2019. 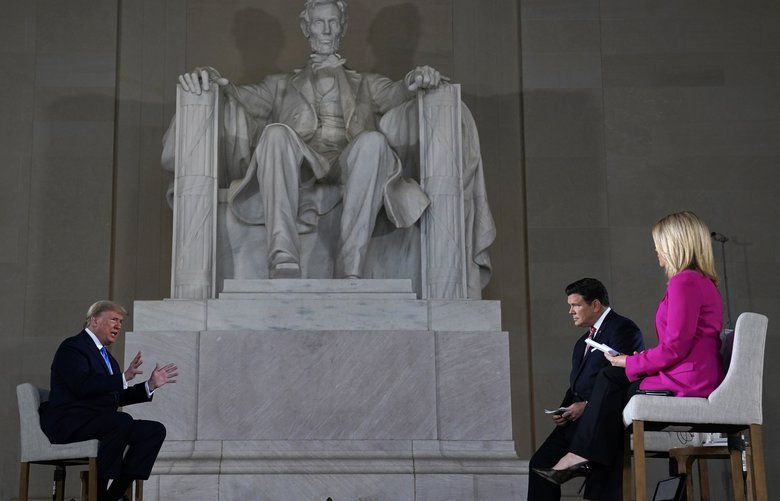 Events are not allowed in the Lincoln Memorial. How Trump got an exception

Indeed, The Washington Post reported that a key administration official overseeing the stockpile sought to “bolster the nation’s stockpile of defenses against biological and chemical weapons, a focus he made a priority over preparing for a natural pandemic.”

A senior administration official suggested that Trump was specifically talking about the stockpile’s inventory of N95 masks – fitted face masks that block most airborne particles. “The national stockpile was depleted of three-quarters of its N95 inventory during the H1N1 outbreak [in 2009], but the Obama administration failed to build it back,” he said. The Washington Post reported that more than 85 million of those masks were distributed back in 2009, during the swine flu outbreak, but they were not replaced, despite warnings from industry officials in 2009 and 2010.

But the now-retired Burel, in an interview with Vice News, said officials faced “horrible” choices given the limited money ($650 million a year) received from Congress: “We had to trade off those funds that we had, and we chose to invest in those lifesaving drugs that would not be available from any other source, in the quantity needed, and in time. I definitely want to see my health care workers protected; that’s very important. But if I’m thinking, ‘Do I buy this many masks to protect this many workers, or do I buy this many medicines to keep people safe that we can’t get elsewhere?’ there’s no easy answer here.”

In any case, the shelf life of N95 masks is generally five years, so in theory, any masks purchased in 2009 would have needed to have been replaced. (Some 5 million masks in the stockpile were expired; 12 million were not.) The Centers for Disease Control and Prevention said some masks in the stockpile dated to 2003, but in a study of 11 models, it found that most still appeared to work effectively.

In sum, Trump might have a point about Obama not replacing the masks, but his language is still misleading. He bears responsibility for choices made in the direction of the stockpile under his watch, including not prioritizing preparation for a pandemic. He cannot so sweepingly declare that an $8 billion stockpile was “empty.”

“It [AIDS] was a death certificate. And then, all of a sudden, they came up with some kind of – and now we have – we will be AIDS-free within eight years. We started 10 years. Should have started in the previous administration. They did nothing.”

Obama “did nothing” to fight AIDS? We know Trump likes to think that nothing happened before he became president, but a check of the appropriations numbers would show that Obama targeted a lot of money at fighting AIDS.

In fact, Obama spent about $3.5 billion a year on research and prevention, according to an accounting by the Kaiser Family Foundation, which is about the same as Trump’s numbers in his first years as president. (Of course, the money that was spent had to be approved by Congress.) Obama also had a plan, first issued in 2010 and then again in 2015, called the National HIV/AIDS Strategy for the United States. The 2015 version called for reducing the number of new diagnoses by 25% by 2020.

Trump, in 2019, called for an even bolder goal, backed by increased funding – reducing new HIV infections in the United States by 75% within five years and by at least 90% within 10 years. The administration official said Trump’s plan was “far more aggressive” than the previous administration’s 25% goal. “The president has been clear that this sort of bold, aggressive undertaking should have been launched long ago,” he said.

OK. But that’s not the same thing as doing nothing. (Sometimes, Trump has even claimed that Obama “spent no money” on AIDS or that Obama “chose not to” end the AIDS epidemic.) It’s not clear whether Trump’s goal is even attainable, and in any case his strategy clearly builds on Obama’s earlier efforts. So, it’s false to say Obama did nothing.

The Fact Checker is a verified signatory to the International Fact-Checking Network code of principles.