“We can ban assault weapons and high-capacity magazines in this country once again. I got that done when I was a senator. It passed. It was the law for the longest time. And it brought down these mass killings. We should do it again.”
— President Joe Biden, in remarks on the shootings in Boulder, Colo., March 23, 2021

Whether the Clinton-era ban on assault weapons, pushed through the Senate by Biden, was effective has long been a subject of interest for politicians and researchers — and The Fact Checker. Every few years, usually after a mass shooting, we find ourselves digging into the research to see whether there is fresh evidence to bolster the claims of Democrats that the ban was effective.

Over time, as more research has been published, the Pinocchio count has decreased. It also makes a difference how a politician frames the issue. Biden did not claim a “big drop” in deaths, as former President Bill Clinton did in 2019; Biden more modestly said the law resulted in fewer mass killings.

Part of the problem is that the assault weapons ban existed for only 10 years, and there are relatively few mass shootings per year, making it difficult to fully assess its impact. Adding to the complexity, researchers use different definitions for a “mass shooting,” which can vary from at least three to six people killed. There is not even an settled definition of “assault weapons,” though most people would include the AR-15 semiautomatic rifle, which is implicated in many mass shootings.

In 1994, Clinton signed into law the ban on assault weapons and large-capacity magazines (LCM), defined as those that could hold more than 10 rounds. The law — which grandfathered in an estimated 1.5 million assault weapons and 25 million LCMs already owned by Americans — was in place for 10 years until President George W. Bush let it lapse.

Even supporters of the law have acknowledged that it was riddled with loopholes, such as allowing copycat weapons to be sold, that limited its effectiveness.

Initially, research seemed to confirm that. 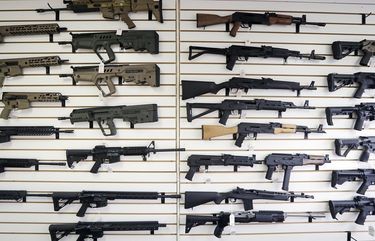 A 2004 study for the Justice Department found that the ban’s impact on gun violence was mixed, at best, because of exemptions written into the law; if the ban were renewed, the “effects on gun violence are likely to be small at best and perhaps too small for reliable measurement.” The report said that assault weapons were “rarely used” in gun crimes but suggested that if the law remained in place, it might have a bigger impact.

“Assault weapons are not as commonplace in mass shootings as some gun-control advocates believe,” Fox wrote in a 2013 article in the journal Homicide Studies. Instead, “semiautomatic handguns [47.9%] are far more prevalent in random massacres than firearms that would typically be classified as assault weapons.”

Did the assault weapons ban make a difference in mass shootings? Not significantly, according to Fox’s data at the time. From 1976 to 1994, about 18 mass shootings occurred each year. During the ban — 1995 to 2004 — there were about 19 incidents per year. After the ban, through 2011, the average went up to nearly 21.

That was the state of play in 2016, when a claim that a rise in mass shootings was related to the expiration of the ban earned Three Pinocchios. At the time, even the lawmaker making the claim could not point to data that would support the assertion.

But, with mass shootings over the years, the possible impact of the 1994 law has come into greater focus.

Christopher S. Koper, an associate professor of criminology at George Mason University, was the author of the 2004 Justice Department study that found the law had minimal effect. But in a 2020 study, Koper said evidence suggested that mass killings had increased after the federal ban on assault weapons expired.

Ironically, the ban may have been increasingly more effective toward the end of the 10-year period. “The law’s significant exemptions ensured that its full effects would occur only gradually over time, and those effects were still unfolding at the time it expired,” Koper wrote, saying the law helped cap and then reduce the supply of assault weapons and large-capacity magazines.

The restrictions on large-capacity magazines may have been especially important. “Data on mass shooting incidents suggest these magazine restrictions can potentially reduce mass shooting deaths by 11% to 15% and total victims shot in these incidents by one quarter, likely as upper bounds,” Koper wrote, adding, “It is reasonable to argue that the federal ban could have prevented some of the recent increase in persons killed and injured in mass shootings had it remained in place.”

Fox, meanwhile, co-wrote a 2020 study of state gun laws that concluded that two key provisions can be especially effective. “State laws requiring a permit to purchase a firearm, which includes a background check on all purchases, are associated with 60% lower odds of a mass public shooting occurring,” he told The Fact Checker. “Bans on large-capacity magazines are associated with 38% fewer fatalities and 77% fewer nonfatal injuries when a mass shooting occurred.”

Louis Klarevas, a research professor at Teachers College at Columbia University, studied high-fatality mass shootings (six or more people) for his 2016 book “Rampage Nation.” He said that compared with the 10-year period before the ban, the number of gun massacres during the ban period fell by 37% and that the number of people dying because of mass shootings fell by 43%. But after the ban lapsed in 2004, the numbers in the next 10-year period rose sharply — a 183% increase in mass shootings and a 239% increase in deaths.

In a more recent study cowritten by him and published by the American Journal of Public Health in 2019, Klarevas also measured the impact of banning large-capacity magazines and concluded that such bans end up saving lives. “When LCMs were involved, the average death toll for gun massacres increased by 62%,” he said. “Jurisdictions that did not have LCM bans in place experienced a 129% increase in the incidence rate and a 206% increase in the fatality rate of gun massacres.”

“There is ample evidence to support President Biden’s suggestion that a new federal ban on assault weapons and large-capacity magazines will reduce mass shooting violence and save lives,” Klarevas said.

There is ample evidence to support President Biden’s suggestion that a new federal ban on assault weapons and large-capacity magazines will reduce mass shooting violence and save lives.”
— Louis Klarevas, professor, author of ‘Rampage Nation’

Several other noteworthy reports exist. A 2014 study by Mark Gius of Quinnipiac University, published in Applied Economics Letters, concluded that while “assault weapons bans are effective in reducing mass shooting fatalities, their effects on the overall murder rate are probably minimal at best.” A study of mass-shooting data from 1981 to 2017, published in 2019 in the Journal of Trauma and Acute Care Surgery by a team led by Charles DiMaggio, a professor of surgery at New York University’s Langone Medical Center, found that an assault weapons ban would have prevented 314 of the 448, or 70%, mass-shooting deaths during the years when the ban was not in effect. But the data used in that study has come under attack by some analysts, including Klarevas.

Grant Duwe, director of research and evaluation for the Minnesota Department of Corrections, has assembled a database of mass shootings that he has previously shared with The Fact Checker. Duwe defines a mass public shooting as an incident in which four or more victims are killed publicly with guns within 24 hours — in workplaces, schools, restaurants and other public places — excluding shootings in connection with crimes such as robbery, drugs or gangs. He then adjusts the data for population and also looks at five-year moving averages.

“There’s not strong support for the notion that the per capita incidence was much lower during the late 1990s and early 2000s,” Duwe told us in 2019. “There’s more support, however, for the idea that the per capita severity (the rates at which victims were killed or shot in mass public shootings) was lower during this period of time. But what’s even clearer from the data is that there has been an increase in both the incidence and severity of mass public shootings (on a per capita basis) since the latter part of the 2000s.”

The White House had no specific comment, except to point to the research published by DiMaggio and Gius.

Biden said the 1994 law brought down mass killings. The biggest hurdle for him is that correlation does not necessarily equal causation. But Biden also was careful to cite both the ban on assault weapons and large-capacity magazines — and new research increasingly supports the idea that restrictions on LCMs were effective in reducing the death toll when the law was in effect.

Moreover, recent research also supports the contention that mass shootings have increased since the law expired. What once was a hunch, unsupported by rigorous research, has now been largely confirmed. Biden did not say that, but it helps bolster the case that the law was more effective than originally understood.

If Biden had suggested the decrease in shootings was large, as Clinton did two years ago, he might have been in line for at least One Pinocchio. But we will leave this unrated. The body of research now suggests the 1994 law was effective in reducing mass-shooting deaths.