— House Minority Leader Kevin McCarthy, R-Calif., in response to a reporter’s question outside the White House, May 12, 2021

McCarthy had just spent 90 minutes in a White House meeting with President Joe Biden, Vice President Kamala Harris and the other congressional leaders when he made these remarks. All participants agreed the discussion on how to fund infrastructure investments was cordial.

Under the old rules of Washington decorum, a gaggle with reporters immediately after the meeting was perhaps not the best time for the House Republican leader to question Biden’s legitimacy as president.

But if that was his calculus, McCarthy was decorous to a fault.

When a reporter asked a thorny question about the right-wing conspiracy theory, promoted by many Republicans and right-wing media personalities, that Donald Trump really won the 2020 election rather than Biden, McCarthy described it as a thing of the past. It’s more like an ongoing dumpster fire.

We won’t be awarding any Pinocchios to McCarthy, because he stated a belief and not a fact. Phrasing and word choices often make a difference in fact-checks.

But the claim is incredible, so here’s a (non-exhaustive) list of those who are still hawking this conspiracy theory. Perhaps it will jog McCarthy’s memory. His representatives did not respond to a request for comment.

— Donald Trump: The day before McCarthy’s remark, former President Trump wrote on his blog: “All States should pass Voter ID laws along with many other fair and comprehensive election reforms, like eliminating mass mail-in voting and ballot harvesting, so we never again have an election rigged and stolen from us.”

— Rep. Elise Stefanik, R-N.Y.: McCarthy soured on Rep. Liz Cheney, R-Wyo., and she was ousted from her House leadership role as Republican conference chair on the same day as this White House meeting. The reason was Cheney’s forceful denunciation of Trump and his election lies. Now, McCarthy is supporting Stefanik’s bid to take over Cheney’s former leadership post. We just gave Stefanik Four Pinocchios for continuing to promote a litany of false claims about election “irregularities” and “unconstitutional overreach” in 2020. 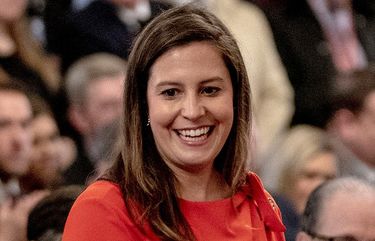 Stefanik said she was one of the ‘most bipartisan’ members of Congress. Then she went all-in on Trump election claims.

Arizona Republicans: Biden unexpectedly won Arizona. The GOP-controlled state Senate ordered an audit of general-election votes in Maricopa County, the state’s most populous, and it’s still underway. The Justice Department raised concerns that the 2.1 million ballots at issue could be compromised and that the private contractor conducting the audit, a company called Cyber Ninjas, would be engaging in “potential intimidation of voters” if it carried out plans to canvass certain precincts and interview voters. Maricopa County officials say the votes have been validated repeatedly. “Republicans have pressed ahead with a new, highly unusual inquiry that has ranged from scrutinizing ballots under UV lights to seeking traces of bamboo,” The Washington Post reported. “With Cyber Ninjas, they hired a company whose chief has echoed Trump’s unfounded claims of problems with the 2020 election.”

— More than 100 retired generals: In a three-page public letter released this week, they regurgitated a stream of Trump’s favorite talking points and baselessly called into question the legitimacy of Biden’s election. “The FBI and Supreme Court must act swiftly when election irregularities are surfaced and not ignore them as was done in 2020,” they wrote.

— Large segments of the right-wing media: As The Fact Checker was typing up this list, the top story on the website of One America News was about the Arizona audit, claiming there was a “recent discovery of several deleted databases from the Election Management System.”

— Rep. Matt Gaetz, R-Fla.: He tweeted May 10: “Brave patriots in Arizona are fighting for an AUDIT to improve elections going forward. Biden’s DOJ is trying to intimidate & interfere to stop the audit. We must demand ELECTION INTEGRITY!”

— Rep. Marjorie Taylor Greene, R-Ga.: According to NPR, at a rally with Gaetz in a Florida hotel ballroom last week, she told the crowd: “I just got to check something; I just want to make sure I’m in the right place. Tell me, who is your president?” The crowd responded, “Donald Trump!” Greene said, “That’s my president, too.” She went on to say: “Do you guys really think he (Biden) won?” The crowd shouted no and she responded, “I didn’t see this kind of support for a man that stayed in a basement for an entire year campaigning, did you?” (Some Republicans aver that Biden could not have won by the margins he attained because he paused campaign events and mostly stayed home during the height of the coronavirus pandemic.)

— Rep. Paul Gosar, R-Ariz.: In responding to an ethics complaint, Gosar last month raised a series of questions about Arizona’s vote count in 2020 and claimed there were “voting machine irregularities.”

— Rep. Claudia Tenney, R-N.Y.: “No one knows about what happened in the election,” she told CNN after the vote to oust Cheney. “We don’t know if it was stolen or not.”

— Rep. Jody Hice, R-Ga.: He told CNN Trump was the rightful winner: “I believe if it was a fair election, yes. I believe absolutely.”

— Rep. Bill Johnson, R-Ohio: In a CNN interview, he mentioned election “anomalies” and made the roundly debunked claim that some states “violated their own state election laws and their constitution — thereby the federal constitution.”

— Rep. Lauren Boebert, R-Colo.: Speaking at a conference last month, Boebert continued to raise questions about Biden’s victory. According to the Daily Sentinel: “While she referred to Biden as president on several occasions during her address and a question-and-answer session afterwards, she didn’t respond to a question about whether Biden’s election was legitimate. She did, however, defend her stance in January in challenging the Electoral College results in Congress that put Biden into office. ‘There are certain states that went against their states’ constitutions,’ she said. ‘It was not the states’ legislatures that were determining election laws. You had secretaries of state, attorneys general, rogue judges and many other elected officials and unelected bureaucrats changing election laws.'”

— Rep. Andy Biggs, R-Ariz.: On the day of McCarthy’s remark, Biggs was asked about the election. HuffPost quoted him as saying: “A lot of people question it, to be frank with you. … I think we have some election integrity issues that we need to resolve.”

— Rep. Dan Bishop, R-N.C.: “I think there were irregularities in the conduct of the election,” Bishop told HuffPost. “There was a fairly widespread problem of executive branch agencies in various states altering rules that were established by the state legislatures according to the Constitution.”

— Rep. Victoria Spartz, R-Ind.: In an interview this month, she was asked whether Biden legitimately won. “It’s very difficult to say after the fact whether it happened or not,” she told Howey Politics Indiana. “The way our system was set up, if we’re going to have strong, integrity elections, we’re going to have to have good controls during the election process and before the election processes.”

— Former Trump adviser Steve Cortes: In an interview on Newsmax, he rejected McCarthy’s view that questions about the 2020 election had died down. Cortes baselessly claimed there were “real data-driven reasons to doubt the accuracy of the 2020 election.”

— Kevin McCarthy: Immediately after the Jan. 6 attack on the Capitol by a pro-Trump mob, McCarthy voted in favor of the objections to the electoral college votes from Arizona and Pennsylvania. In total, 121 Republicans voted against certification of Arizona’s electoral votes and 138 votes against certifying Pennsylvania’s votes. Biden won both states. The objections in the House were prompted by a series of conspiracy theories and debunked claims. McCarthy has not said whether the concerns that led him to oppose certification of Biden’s legitimately earned votes have been allayed.