Skip to content
By
MAGGIE ASTOR
The New York Times

These were some of the adjectives that women used last week to describe watching Sen. Elizabeth Warren of Massachusetts on the debate stage, where she confronted former Mayor Michael Bloomberg of New York over his past embrace of stop-and-frisk policing tactics, his history of sexist comments and the nondisclosure agreements binding some of his former employees.

To many of these women, it felt like a potential turning point for Warren’s stagnant campaign, though it remains to be seen whether that is true. For those angry or discouraged by what they saw as a premature declaration of political death — and especially for women who work in politics and are all too familiar with the headwinds facing female candidates — it also felt profound: a woman standing up and declaring that she would not be dismissed.

Related More from the campaign 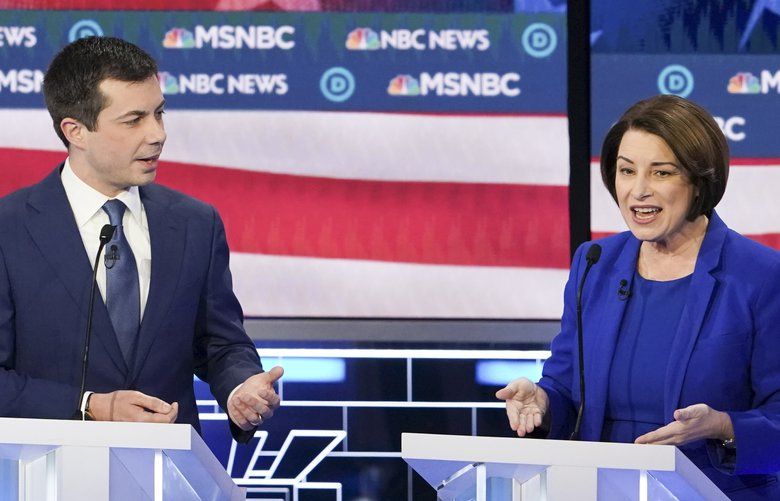 “It was cathartic as hell,” said Amanda Litman, executive director of Run for Something, which supports young Democrats running for office. “This felt like if you’re going to count her out, she’s not going down without a fight.”

Now, with another debate Tuesday night and the South Carolina primary just four days away, Warren’s supporters are waiting to see if she can do it again.

Warren has had strong debate performances before, of course — especially last summer and early in the fall, when she was surging in the polls and her path to the nomination was easier to imagine. But this one was different, precisely because that path has become so much less clear.

“It was the woman of a year ago,” Kelsey Duckett, 35, said at a Warren rally in Denver on Sunday. “She’s showing us why we supported her in the beginning.”

Duckett added of the fusillade against Bloomberg, “Who doesn’t want to see her do that to Donald Trump?”

That element of Warren’s performance also spoke directly to the quality that some voters on the fence were most concerned with: electability. It is a squishy, eye-of-the-beholder judgment often used against women, but it has been a real barrier for Warren with voters who like her and her policies but are worried that she would lose to Trump.

“People are really scared about electability,” Lauren Hess, a resident of Georgetown, Colorado, who called voters in Iowa and New Hampshire for Warren, said outside the Denver rally.

“I wish she had been doing better,” Hess added. “But it’s not over.”

Warren made no secret of the fact that she saw Bloomberg as a stand-in for Trump: After he qualified for last week’s debate, she tweeted that the candidates would have an opportunity to show voters how they would “take on an egomaniac billionaire.” And many viewers certainly saw her performance that way.

“I thought, ‘That is a general election candidate,’ ” Rachel Dane, 33, founder of a nonprofit that provides legal services to survivors of domestic violence and sexual assault, said at the rally.

Warren’s performance was reminiscent of the ones that made her a national name to begin with. Long before she was a senator and presidential candidate, Elizabeth Warren the Harvard Law School professor and Elizabeth Warren the Consumer Financial Protection Bureau creator went toe-to-toe with powerful men.

In 2005, she clashed with Joe Biden, then a senator from Delaware, over bankruptcy reform in an exchange that ended with Biden saying, to some laughter: “OK, I get it. You’re very good, professor.”

In 2009, Warren, as chairwoman of the Congressional Oversight Panel, grilled Treasury Secretary Timothy F. Geithner on the execution of one of the bailout programs created to address the financial crisis. In 2016, as a senator, she sharply questioned the chief executive of Wells Fargo. In 2017, she did the same for the chief executive of Equifax over the data breach that exposed millions of Americans’ personal information.

“That was the senator that we watched make bank executives cry,” Jess McIntosh, a SiriusXM host who worked for Hillary Clinton, said on CNN after the debate.

Commentators and political scientists, especially those who study women in politics, noted how unapologetically Warren had expressed anger on the stage — despite the risk she faced, given sexist double standards.

“I don’t know how to put it other than she was a badass,” said Jennifer Lawless, a professor of politics at the University of Virginia and former director of the Women & Politics Institute at American University.

“She went out there and said what every other candidate on that stage was thinking, and she did it in a way that demonstrated she was really willing to play hardball.”

Warren’s debate performance led to a flood of donations: $9 million in just three days. She has raised a total of $21 million this month, according to her campaign, and spent $1.5 million of it on new ads in the states voting on Super Tuesday, March 3, and in Washington, which votes a week later.

Her challenge now is to parlay her performance and her money into tangible results.

If debates do move the needle, it wasn’t clear in her fourth-place finish in Nevada. The state held its caucuses a few days after the debate, and early voting, in which about 75,000 of the 105,000 total votes were cast, took place before it, meaning any potential bounce for Warren was not fully reflected.

By the time South Carolina goes to the polls, though, this week’s debate may be fresher in voters’ minds than anything Warren did last week.

Her supporters understand how crucial it is for her to replicate her performance, but it won’t necessarily be easy.

A great deal of attention at the debate is likely to shift to Sen. Bernie Sanders of Vermont, who is the favorite to win the nomination after a blowout victory in Nevada. Having been thoroughly pummeled last week, Bloomberg might be better prepared this time to parry the blows and throw some of his own. And Warren faltered somewhat late last year when she started to get more incoming attacks.

That means, Lawless said, she has to “demonstrate that she can not only dish it, she can take it.”

Warren has one thing going for her, though: Her disappointing finish in Nevada did not erase last week’s debate, at least not among her audience in Denver, where questions were peppered with references to her “wrecking” Bloomberg. One woman praised her for the “trash-can beating.”

“Women can be tough,” Warren replied. “I’ll poke him again.”