A data expert for former President Donald Trump’s campaign told him bluntly not long after polls closed in November 2020 that he was definitely going to lose his campaign for reelection.

In the weeks that followed, multiple top officials at the Justice Department informed Trump that they had closely examined allegations of fraud that were being circulated by Trump’s close allies — and had found them simply untrue.

And in the days leading up to the joint session of Congress on Jan. 6, 2021, even Trump’s loyal vice president, Mike Pence, repeatedly conveyed to Trump that he did not believe the Constitution gave him the power to overturn the election as he presided over the counting of electoral college votes giving the presidency to Joe Biden. 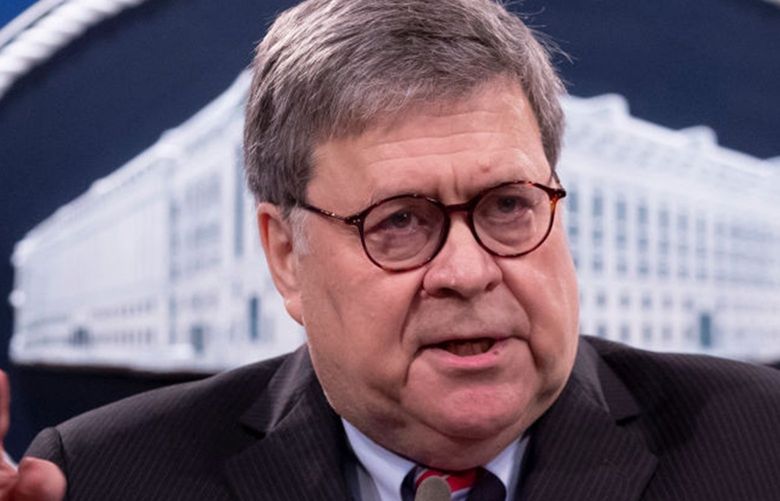 These and other new details were included in a legal brief filed late Wednesday by lawyers for the House committee investigating the Jan. 6 attack on the U.S. Capitol as they began to build a case that Trump was knowingly misleading his followers about the election and pressuring Pence to break the law in the weeks and hours before the assault.

According to the panel and others, at least 11 aides and close confidants told Trump directly in the weeks after the election that there was no fraud and no legal way to overturn the result.

The committee’s goal was to convince a federal judge there is a “good-faith basis” for concluding Trump and others engaged in a “criminal conspiracy” to defraud the United States and obstruct Congress before the attack on the Capitol — and to prove that Trump was acting corruptly by continuing to spread false claims about the election long after he had reason to know he had legitimately lost.

The committee has no law enforcement powers and the filing has no bearing on whether the Justice Department will file criminal charges against the former president in connection with his postelection activities. Indeed, several witnesses whose statements or emails were cited by the committee in the filing said Thursday that they have not been contacted by law enforcement as part of any investigation.

But the committee could put pressure on the Justice Department to act by unspooling evidence Trump was lying to his supporters and pushing his vice president to break the law. And the filing could be the start of an attempt to build the case to the public that Trump bears moral culpability for the violence that erupted on Jan. 6.

“I mean, he, he understood what he was doing was wrong,” said committee member Rep. Jamie Raskin, D-Md., in an interview. “I’ve never really doubted that from the beginning. But all of this evidence makes it certain that he had consciousness of guilt as he proceeded to try to overthrow the election result.”

In a lengthy statement Thursday, Trump rejected the committee’s allegations, claiming once again that his election loss was “fraudulent.” 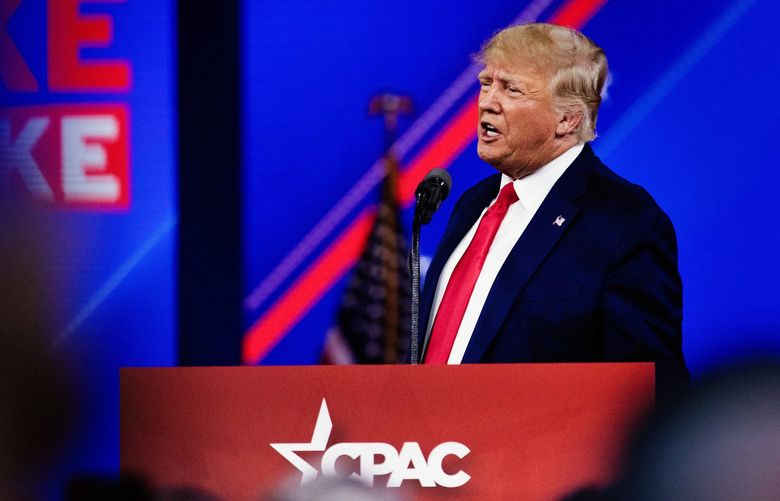 “The Unselect Committee’s sole goal is to try to prevent President Trump, who is leading by large margins in every poll, from running again for president, if I so choose. By so doing they are destroying democracy as we know it,” he said.

For now, the committee’s immediate aims with the court filing were limited. The panel is trying to convince a federal judge presiding over a lawsuit to order former Trump lawyer John Eastman to turn over thousands of pages of emails and other documents from the days around the Jan. 6 attack.

Eastman has said the records are protected by attorney-client privilege. But the committee argued that a federal judge should privately review the documents to see if they show evidence that Eastman helped Trump commit a crime, which would void the privilege. In a statement, Eastman’s lawyer said he looks forward to responding in court but complained that the committee was using an unrelated civil proceeding to accuse Eastman of criminal conduct.

The committee’s assertion that Trump may have broken the law provided the strongest hint to date that the panel may conclude its work by formally asking the Justice Department to launch a criminal investigation into the former president.

In the court filing Wednesday, the committee argued that the fact that Trump’s claims that the election was marred by fraud were repeatedly refuted by knowledgeable aides led to “a good-faith inference” that Trump’s statements came “with knowledge of the falsity of these statements and an intent to deceive his listeners in hopes they would take steps in reliance thereon.”

What’s more, following the convening of the electoral college on Dec. 14, they wrote, Trump and his close aides knew he had not collected enough “legitimate” electoral votes to win the election. “The President nevertheless sought to use the Vice President to manipulate the results in his favor,” committee lawyers wrote.

“To some extent his craziness is his best defense,” said former federal prosecutor Randall Eliason. “The fact that he often appears to actually believe some of this stuff could cut in his favor when it comes to a criminal case, where prosecutors would have to show corrupt or fraudulent intent.”

People interviewed by the committee have said the panel’s investigators have zeroed in on moments when Trump was informed his rhetoric was not rooted in fact or was warned that he was urging others to break the law.

Investigators have focused even on events that took place before Election Day, apparently attempting to establish that Trump’s claims that ballots sent by mail could lead to fraud were part of a plot to allow him to overturn the election if he lost, according to two people who have been quizzed by the committee, who spoke on the condition of anonymity to discuss their private depositions.

One of those people said the committee spent five hours focused particularly on the role of former chief of staff Mark Meadows and Trump attorney Cleta Mitchell in casting doubt on the election even before the vote. The committee is probing extensive text messages between Meadows and Mitchell, the two people said.

Neither Meadows nor Mitchell responded to requests for comment Thursday.

The committee has also focused on how quickly some of Trump’s top advisers came to believe that allegations circulated by some of his allies that Dominion Voting Systems machines had been hacked were not true, one of the people said. And they have been interested in why campaign lawyers disengaged from Trump’s elections challenges, allowing Trump’s personal attorney Rudy Giuliani to take the lead instead.

Wednesday’s court filing also included excerpts of depositions where investigators asked witnesses pointed questions about whether they had informed Trump that the voter fraud allegations were not true.

Then-acting deputy Attorney General Richard Donoghue told the committee that during a phone call with Trump on Dec. 27, 2020, he told the president: “Sir, we’ve done dozens of investigations, hundreds of interviews. The major allegations are not supported by the evidence developed.”

Separately, former Attorney General William Barr writes in a new book that he told Trump in an explosive meeting in the Oval Office on Dec. 1, 2020, that his claims of election fraud were groundless.

“I’ve told you that the fraud claims are not supported … And others have also told you this. But your legal team continues to shovel this … out to the American people. And it is wrong,” Barr recounts in his new memoir, which was obtained by The Washington Post ahead of its March 8 publication.

The committee also appears focused on moments when Trump was advised that the law did not allow Pence to use the joint session of Congress to refuse to recognize Biden electors.

In his closed-door deposition, Greg Jacob, an aide to Pence, was repeatedly asked by investigators about moments when he believed Eastman conceded his advice might constitute a violation of the Electoral Count Act that governs the presidential transition, according to a person familiar with the matter. Eastman had urged Pence to call for a delay in the counting of the electoral college votes on Jan. 6.

The committee has also obtained a legal memo Jacob wrote for Pence after a Jan. 4 meeting in the Oval Office in which Eastman told Trump that Pence was not bound to recognize electoral college votes for Biden. Jacob concluded in the memo that Eastman was counseling the vice president to violate the law, the person said.

In its court filing, the committee also cited an email from Eastman to Jacob at 9:44 p.m. on Jan. 6 — after the Capitol had been cleared of rioters and Congress had reconvened — in which he continued to push for Pence to delay the vote. Arguing that Congress had already violated the law’s exact procedure, Eastman wrote, “I implore you to consider one more relatively minor violation” and have Pence adjourn the session before the votes were counted.

Despite the evidence that Trump was repeatedly warned he was misleading people, several people said Trump spent the weeks between the election and Jan. 6 consulting with other confidants, including Giuliani, who insisted the election was rife with irregularities and fraud. People who have spent extensive time around Trump say he fiercely insists even in private he was the election’s true winner.

Former campaign adviser Jason Miller testified to the committee that a campaign data expert had told Trump days after the election that he had lost, according to the committee’s Wednesday court filing. Miller has told others privately that Trump repeatedly rejected such briefings and was “never going to give it up.”

Legal experts said it might be difficult to prove in a courtroom that Trump acted with criminal intent if Trump was persuaded of his own falsehoods. Raskin insisted that the committee is not trying to solve “the question of criminal culpable intent.”

But he pointed to the evidence gathered by the committee so far and the dozens of court cases Trump lost in the weeks after the election in which judges appointed to the bench by presidents of both parties rejected allegations of fraud.

“He had to know that was a lie,” Raskin said.