Arizona Secretary of State Katie Hobbs certified election results on Monday, officially naming Joe Biden as the winner of the state and further cementing his national victory over Donald Trump.

Hobbs, a Democrat, certified the statewide vote in the company of two key Republicans, Gov. Doug Ducey and Attorney General Mark Brnovich. Brnovich has vocally defended the integrity of Arizona’s election against his own party’s claims of widespread fraud, saying his office investigated and found no evidence.

“This election was conducted with transparency, accuracy and fairness in accordance with Arizona’s laws and election procedures – despite numerous unfounded claims to the contrary,” Hobbs said Monday.

Ducey also said the state’s election was run properly. “The pandemic and covid-19 brought new unprecedented challenges for our state. But as I said before, we do elections well here in Arizona,” he said. “The system is strong, and that’s why I have bragged on it so much.” 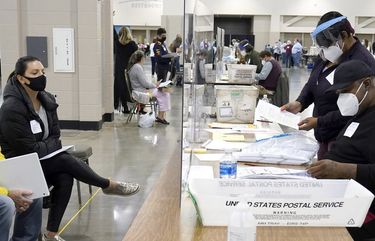 Biden’s win over Trump in Wisconsin set to be certified

The certification paves the way not only for Biden to receive the state’s 11 electoral votes but also for Democrat Mark Kelly to join the U.S. Senate. Kelly, who defeated incumbent Republican Sen. Martha McSally in a special election Nov. 3, is expected to be sworn in Wednesday.

The legal contests in Arizona are not over, however. It is one of several states that permits election results to be challenged after certification.

Kelli Ward, chairwoman of the state Republican Party, has said she intends to lodge such a challenge. She has already asked a court to allow her to begin inspecting mail ballots and envelopes, arguing that poor signature verification may have allowed fraudulent votes to be counted. A hearing on that request was underway as Hobbs certified the results.