Skip to content
By
Anton Troianovski
The New York Times

“The paralysis of power and will is the first step toward complete degradation and oblivion,” Putin intoned, referring to the Soviet Union’s collapse. “We lost confidence for only one moment, but it was enough to disrupt the balance of forces in the world.”

For Putin, the end of the Soviet Union was the “greatest geopolitical catastrophe of the century,” a “genuine tragedy” for millions of Russians because it left them scattered across newly formed national borders. The disaster was caused, in Putin’s telling, by the weak nerves of a leader too willing to bend to the demands of a treacherous and duplicitous West — a mistake, the Kremlin’s televised propaganda now often reminds viewers, that Putin is determined not to repeat.

In Ukraine, Putin is fighting in the shadows of the empire whose end Gorbachev presided over, having started a war that has killed thousands in the name of restoring Moscow’s dominance over what it claims to be Russian lands. But Putin’s battle to reverse Gorbachev’s legacy extends beyond territorial control to the personal and political freedoms that the last Soviet president ushered in — and that the Kremlin is now fast unraveling.

“All of Gorbachev’s reforms are now zero, in ashes, in smoke,” a friend of Gorbachev’s, radio journalist Alexei A. Venediktov, said in a July interview. “This was his life’s work.”

Gorbachev, who has died at age 91, was still in power when Venediktov’s freewheeling liberal radio station, Echo of Moscow, first went on the air in 1990 and came to symbolize Russia’s newfound freedoms. After Putin ordered troops into Ukraine in February, the Kremlin forced the station to shut down. 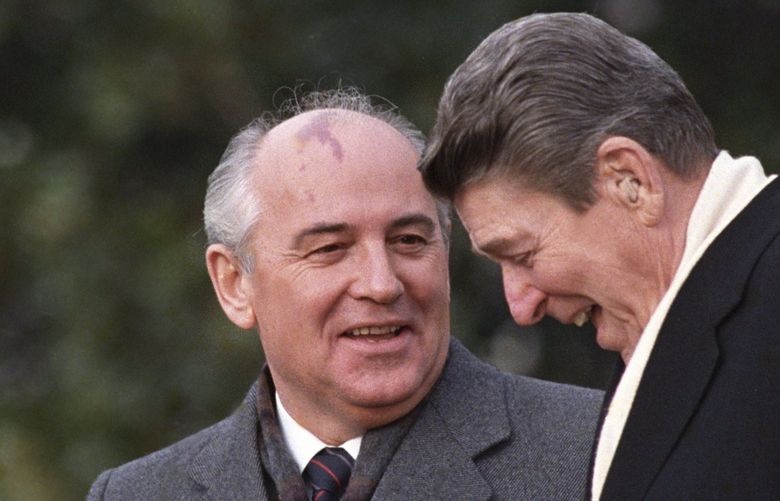 And Novaya Gazeta, the independent newspaper that Gorbachev used his Nobel Peace Prize money to help found in the early 1990s, was forced to suspend publication in March, threatened by a new wartime censorship law.

Gorbachev, in ill health, said nothing himself publicly this year about the war in Ukraine. His Gorbachev Foundation, a research institute that “seeks to promote democratic values,” issued a statement two days after the invasion calling for a “speedy cessation of hostilities” and “the immediate start of peace talks.”

But Gorbachev, the son of a Ukrainian mother and a Russian father, backed Putin’s view of Ukraine as a “brotherly nation” that should rightfully be in Russia’s orbit. He supported Putin’s annexation of the Crimean Peninsula in 2014, describing the move as representing the will of a region heavily populated by people who identified as Russian. And he castigated the West for “trying to draw Ukraine into NATO,” warning that such attempts “will not bring anything but discord between Ukraine and Russia.”

He also never publicly disavowed Putin, even as he hinted in recent years that he was upset at the Kremlin’s crackdown on press freedom and free elections. He rejected the idea that Russia’s political realities required limiting people’s rights.

“I keep saying that Russia needs more democracy,” Gorbachev told The New York Times in 2016. “We hear, even from people close to Putin, statements that emphasize authoritarianism, that emphasize decisiveness and that suggest that democracy can only be achieved far into the future.”

Gorbachev appeared confident that the worst could be avoided. Asked about tensions between Ukraine and Russia in 2014, he told a Siberian news outlet, “A war between Russia and Ukraine — this is absurd.”

“This was a man who was a principled opponent of violence and bloodshed,” Dmitri A. Muratov, the editor of Novaya Gazeta and a winner of last year’s Nobel Peace Prize, said in a phone interview.

Still, Gorbachev’s precise views on the invasion that began six months before his death have remained a mystery. Muratov said that he frequently visited Gorbachev in the hospital over the past two years and that he believed that Gorbachev “was not in the condition to comment on current political events.”

Putin issued a statement Wednesday that sounded a conciliatory note — even as his allies in Parliament and in the state media went so far as to consign Gorbachev to a place in hell.

Putin, addressing Gorbachev’s “relatives and friends,” said, “Mikhail Gorbachev was a politician and statesman who had a huge impact on the course of world history.”

“He deeply understood that reforms were necessary, he strove to offer his own solutions to urgent problems,” Putin added.

The brief statement allowed Putin to appear as a statesman above the political fray, but it quickly became clear that Gorbachev would not be venerated by the Kremlin. Its spokesman said that the format of Gorbachev’s funeral — such as whether it would receive state honors — had yet to be determined.

A cornerstone of Putin’s propaganda message is that he stabilized Russia — rebuilding the economy and the country’s status as a great power — after the chaotic and humiliating 1990s that were ushered in by Gorbachev.

As a result, in death, Gorbachev immediately became a symbol for Kremlin allies making the case that trying to liberalize society and make nice with the West can lead to disaster. Gorbachev insisted that he was not trying to bring down the Soviet Union, but to reform it from the inside. He freed political prisoners, lifted restrictions on banned books and films, and warned Communist leaders in East Germany not to use force against their own people even as the country was slipping out of Moscow’s grasp. But by the time he resigned, politically weakened, in December 1991, sealing the end of the Soviet Union, the centrifugal forces tearing the empire apart had spun out of his control.

Now the Kremlin points to Gorbachev’s tenure as a cautionary tale of the danger of liberal ideals. And beyond his assertive foreign policy, Putin has been busy bringing back Soviet-style repression, with the invasion of Ukraine touching off a new campaign against activists, cultural figures and even social-media influencers critical of the government.

Putin has also been working to burnish the image of the Soviet Union, glorifying its military might and cracking down on scholars of the crimes of its secret police.

Putin let slip his view of Gorbachev as a weak negotiator last year when he told NBC that the West had tricked the last Soviet leader at the end of the Cold War by suggesting that NATO would not expand eastward but not enshrining such a pledge in a treaty. (U.S. officials say they made no such commitment.)

“You fooled the little dummy,” Putin said in the interview, using a schoolyard rhyme.

That historical grievance underpins Putin’s contention that the West is not to be trusted, and that Russia needs a stronger, more assertive leader, a view that state media tried to drive home Wednesday with full-throated criticism of Gorbachev.

“Mikhail Gorbachev can serve as an illustration that good intentions of a national leader can create hell on earth for a whole country,” said a column published early Wednesday by the state news agency RIA Novosti. It described him as responsible for “a destroyed country, the nightmare of the 1990s, and the millions of lives lost in civil wars, ethnic cleansing, terrorist attacks and gang wars.”

Igor Korotchenko, a military analyst who is a regular on state television talk shows, was even more blunt. On Twitter, he wrote of Gorbachev: “Burn in hell!”

To those Russians who yearn for better ties with the West and greater freedoms at home, Gorbachev remains a visionary figure. But Muratov, the Novaya Gazeta editor, said that perhaps the former Soviet leader’s greatest legacy was his arms-control talks with President Ronald Reagan that reduced the chances of nuclear annihilation. Putin, in contrast, has not shied away from threatening the West with his nuclear arsenal and fearsome new missiles.

“They gave us the gift of at least 30 years of life without the threat of a global nuclear war,” Muratov said of Gorbachev and Reagan. “We have wasted this gift. The gift does not exist anymore.”