WASHINGTON – Abortion providers and advocates asked the Supreme Court on Thursday to once again take up a Texas law that bans most abortions after six weeks, and find that federal courts have a role in reviewing a state law that effectively blocks a constitutional right.

The court on a 5 to 4 vote Sept. 2 said the law could go into effect while legal challenges to it continued. The conservative justices in the majority cited jurisdictional problems with the request to stop the law, which has a unique structure authorizing private citizens to bring civil actions against anyone who aids and abets an abortion beyond six weeks.

The majority said it was not addressing whether the law could be squared with the court’s current abortion jurisprudence, which does not allow bans on abortions pre-viability, which is about 22 to 24 weeks.

But the coalition that filed Thursday’s request said it was proving unworkable to challenge the law through traditional challenges.

“Texans are in crisis,” said the brief filed by the Center for Reproductive Rights and others. “Faced with the threat of unlimited lawsuits from the general populace and the prospect of ruinous liability if they violate the ban, abortion providers have been forced to comply.”

The result, the brief said, is that Texans who can afford it are traveling hundreds of miles to obtain abortions out of state. And those without means, it said, are forced to maintain an unwanted pregnancy or “seek ways to induce an abortion without medical assistance, as reports now suggest more Texans are doing.”

Essentially, the groups are asking the court to take up the case before there is a definitive ruling from the U.S. Court of Appeals for the 5th Circuit, which won’t hold a hearing until December.

“The writing is on the wall” that the 5th Circuit will hold that federal courts are powerless to preemptively block enforcement of a state law prohibition enforced by private citizens, the filing said.

The coalition, which includes the American Civil Liberties Union and Planned Parenthood, asks the Supreme Court to consider this question: “Whether a state can insulate from federal-court review a law that prohibits the exercise of a constitutional right by delegating to the general public the authority to enforce that prohibition through civil actions.”

It asks the court to expedite consideration, so that the matter could be briefed and heard in December. Other states with legislatures looking to restrict abortion are considering adopting the Texas model. 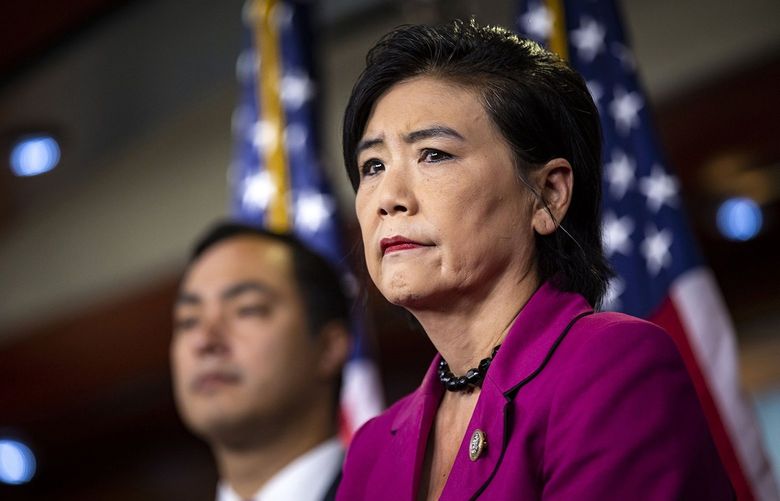 With Roe under threat, U.S. House to vote on bill to counter abortion limits

It would be quite rare for the Supreme Court to accept a case before an issue has worked its way through lower courts.

The court on Dec. 1 will hear arguments over Mississippi’s law banning most abortions after 15 weeks, which is being touted as an opportunity to overturn Roe v. Wade.

The new filing at the Supreme Court is only one strand of the legal maneuvering involving the law, known as Senate Bill 8. The Justice Department has filed suit seeking to have the law declared unconstitutional. A hearing before a federal judge in Texas is scheduled for next week.

And a Texas doctor wrote an op-ed in The Washington Post on Saturday saying that he had provided an abortion for a woman that violated the law. The admission essentially invited a lawsuit that could be used to challenge the statute, and three private citizens have filed suits against Dr. Alan Braid.

The Supreme Court was asked to keep the law, which authorizes those who bring successful civil actions against people who aid a woman in obtaining an abortion a bounty of at least $10,000.

In its short order Sept. 2, the majority said challengers did not show they were likely to succeed with their request to stop state court judges and clerks from acting on the civil lawsuits.

“Federal courts enjoy the power to enjoin individuals tasked with enforcing laws, not the laws themselves,” the opinion said. “And it is unclear whether the named defendants in this lawsuit can or will seek to enforce the Texas law against the applicants in a manner that might permit our intervention.”

The order was unsigned, but it was the product of the court’s most conservative justices – Clarence Thomas and Samuel Alito Jr. – and former president Donald Trump’s nominees to the court: Neil Gorsuch, Brett Kavanaugh and Amy Coney Barrett.

Chief Justice John Roberts Jr. and the court’s three liberals would have kept the law from going into effect while legal challenges continued.

The “consequences of approving the state action, both in this particular case and as a model for action in other areas, counsel at least preliminary judicial consideration before the program devised by the State takes effect,” Roberts wrote.

“The Court’s order is stunning,” wrote Sotomayor. “Presented with an application to enjoin a flagrantly unconstitutional law engineered to prohibit women from exercising their constitutional rights and evade judicial scrutiny, a majority of Justices have opted to bury their heads in the sand.”

The Washington Post’s Ann E. Marimow contributed to this report.