LAS VEGAS — Since the Republican-controlled Senate voted to acquit him on impeachment charges, President Donald Trump has been on something of a perpetual victory lap.

Then, this week, he took his triumphant show to the West Coast.

Trump’s post-impeachment, four-day swing through as many states — three of which Hillary Clinton won in 2016 — was the physical and geographic manifestation of Trump emboldened, as much a defiant flouting from an exultant president as a peripatetic hodgepodge of fundraising, rallies and official White House events out West.

Over stops in Arizona, California, Colorado and Nevada, Trump was buoyant almost to the point of giddiness, bounding over to greet supporters as he deplaned Air Force One and chatting off the record with his traveling press corps — including Wednesday night when Trump, playing the role of eager host, led a klatch of reporters to his personal cabin aboard the Boeing 747 to watch the Democratic debate, which he had TiVo’d.

Yes, he has been impeached — a historical humiliation and a forever asterisk on his presidency — but this week, Trump witnessed the Democrats attack one another for two hours on a debate stage here, basked in the adulation of his cheering rally crowds and presented as a man increasingly confident about his reelection prospects.

Addressing an arena of supporters Wednesday night in Phoenix, Trump relayed the line-by-line of his kinetic day — “I started off with a speech in Nevada at 7:30 in the morning; I then went to California, made two speeches; I then went someplace else” — and projected the image of someone weary but pressing forth, and siphoning vigor from his crowds.

On Tuesday, Trump raised money in the liberal enclave of Beverly Hills, which he followed Wednesday morning with another fundraiser hosted by Oracle founder Larry Ellison at his verdant and exclusive Porcupine Creek golf club in Rancho Mirage, California.

Trump also scheduled a trio of consecutive campaign rallies — Wednesday night in Phoenix, Thursday night in Colorado Springs and Friday afternoon in Las Vegas — before heading back home to Washington.

The Phoenix rally offered deliberate counterprogramming to the Democratic debate here — Trump took the stage exactly 30 minutes after the slate of 2020 hopefuls assembled behind their own lecterns one state away — and his Thursday rally was pointedly placed in Colorado, a state he lost by 5 percentage points to Clinton in 2016 but one that his campaign manager Brad Parscale is bullish he can win this November. 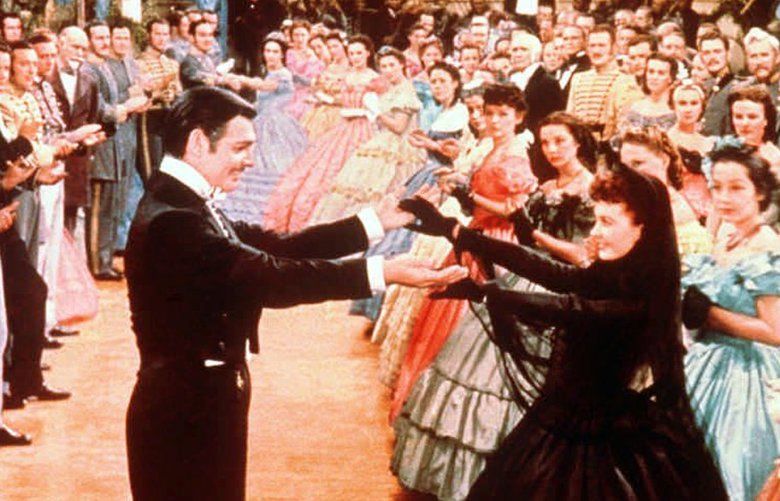 The president loves 'Gone with the Wind.' Historians, not so much.

By Thursday evening, the president’s cheerful disposition seemed to have faded slightly, with Trump offering a nearly 100-minute performance that was aggrieved and discursive at times.

He mocked former New York mayor Mike Bloomberg and Sen. Amy Klobuchar, D-Minn., for what he said were their weak debate performances. (They both “choked,” he said, mimicking a person clutching his chest and struggling to breathe). He complained that “Parasite,” a South Korean film with subtitles, had won the Oscar for best picture. (“We’ve got enough problems with South Korea,” he said, nostalgically calling for another winner like “Gone With the Wind”). And he offered praise for a slew of individuals — some familiar, some less so. (A “nice, slim, beautiful-looking man,” he said, describing Interior Secretary David Bernhardt.)

Trump is a reluctant traveler, partial to the comforts of his eponymously branded properties, and his proposed Western swings often have a way of crumbling under their own grandiosity, aides said. The president initially grumbled about this visit, as well, but was placated by being able to stay at his own Trump International hotel here every night, one official said.

Asked before leaving why he was returning to sleep at his own property each evening, Trump claimed he wasn’t aware of the nightly arrangement.

“Well, I don’t know exactly the schedule because I don’t set the schedule,” he said. “Largely, the schedule is set by the Secret Service. We do what they want us to.”

A White House official then came back to the press cabin of Air Force One, to explain that the president was overnighting in Las Vegas for security reasons, as well as to save money and create as small of an inconvenience as possible for multiple cities.

Ultimately, Trump embraced the nearly week-long trip, sharing news of the final Friday rally here during an Oval Office visit with the president of Ecuador last week, before his campaign had even announced the event.

For the most part, only his tweets — a buzzing current of angry energy, that often started early in the morning — belied his sanguine public demeanor. He mocked Bloomberg — “Mini Mike” or just “Mini,” in his microbursts — and continued to tweet about the Justice Department, despite Attorney General William Barr telling close associates he might have to resign if Trump kept on tweeting about Justice Department affairs.

“Mini Mike Bloomberg’s debate performance tonight was perhaps the worst in the history of debates, and there have been some really bad ones,” Trump wrote. “He was stumbling, bumbling and grossly incompetent. If this doesn’t knock him out of the race, nothing will. Not so easy to do what I did!”

On Andrew McCabe, the former deputy director of the FBI, the president weighed in again Thursday, quoting an ally and writing, “The decision not to prosecute Andy McCabe is utterly inexplicable.”

And, like so much of what he does, the president managed to imbue even ostensibly serious events with a certain Trumpian panache. Speaking in Bakersfield, Calif., on Wednesday at what was billed as a roundtable to discuss water accessibility issues with rural voters, Trump claimed — while offering no evidence — that Bloomberg “hates the farmer” and suggested that Sen. Bernie Sanders, I-Vt., could very well emerge as the Democratic nominee for president.

“We’ll have to start working on Crazy Bernie pretty soon,” he said.

As the president’s motorcade wound back to the airport there, en route to his next stop, a staffer enthused, “Now that’s how you do a rally-table!” — coining a phrase to describe the rallylike feel Trump brought to the purported roundtable.

On Thursday, Trump began his day addressing a graduation for prisoners here in Las Vegas. But after briefly extolling the virtues of redemption and second chances, Trump detoured to weigh in on the breaking news that Roger Stone, a longtime confidant, had been sentenced to three years and four months in prison for impeding a congressional investigation of Russian interference in the 2016 U.S. presidential election.

“I want the process to play out,” the president said. “I think that’s the best thing to do because I’d love to see Roger exonerated, and I’d love to see it happen because I personally think he was treated very unfairly.”

Trump’s digression about Stone lasted several minutes, as he waxed poetic about how Stone is “definitely a character” who “everybody sort of knows” — “He’s a little different, but those are sometimes the most interesting,” he mused — and griped about the jury forewoman, who he claimed was a Never Trump activist.

“Now, you wouldn’t know about a bad jury?” Trump said, to appreciative laughter. “Anybody here know about bad? No? These people know about more bad juries than everybody here, including the sheriff and the mayor and everybody.”

Later, he again commiserated with the graduates — newly released from prison and preparing to reenter society — lamenting that everyone, even the president of the United States, has “those days.”

“I mean, I didn’t do anything wrong, and they impeached me a few weeks ago, right?” Trump asked, seeming bewildered. “They impeached and I said, ‘What happened? What did I do?’ “

But he laughed, and then so did the crowd, because the president’s good mood was infectious.

And even Trump — who has long raged and fumed over the impeachment inquiry against him, which he has repeatedly dismissed as a “hoax” — managed to look on the bright side.

“The good news,” he said, “my numbers went through the roof.”