On April 14, TSA announced just 87,534 travelers passed through its security checkpoints nationwide. On Monday, that number was back up to 215,645.

Despite the increase of people flying, the coronavirus pandemic is far from over. More than 4 million cases have been reported worldwide and more than 275,000 people have died. The nation’s top health experts are still encouraging Americans to stay at home to stop the spread of COVID-19.

As more people return to the airport, they’ll notice that it’s not business as usual. There’s new infrastructure in place, and new protocols being followed to protect travelers and air travel employees from the coronavirus. In addition to deep-cleaning procedures, here are some of the top line changes to expect.

— You’ll wear a mask at the airport and on the plane.

With the Centers for Disease Control and Prevention is recommending everyone wear a face cover when out in public, be prepared to wear one in an airport and on your flight, too. A face mask may be required by the airline, the airport or the local government.

“American, like other U.S. airlines, requires customers to wear a face covering while on board, and this requirement is enforced at the gate while boarding,” an American Airlines spokesperson told The Washington Post in a statement. “Some passengers are exempt, such as young children and those with a medical reason why they cannot wear a mask. The policy also does not apply while eating or drinking.”

In some cases, if a passenger arrives to a flight without a face mask, one may be provided by the airline. 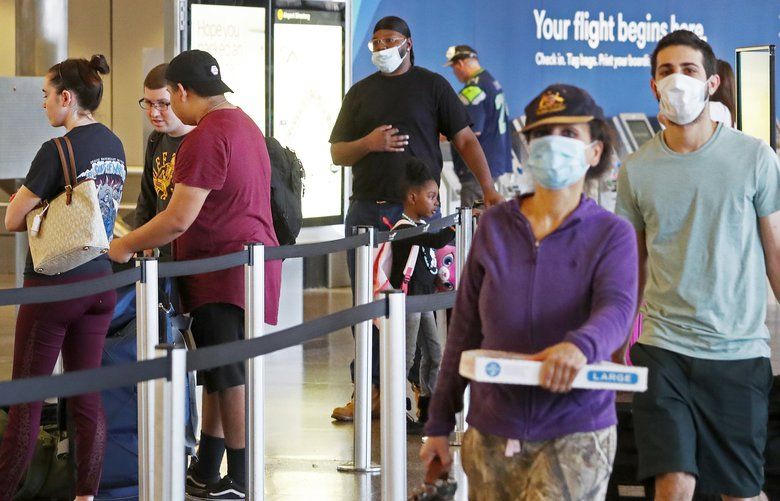 Like in grocery stores, airlines and airports are installing “sneeze guards” in places like check-in counters, security checkpoints, gate lecterns and restaurants to protect against the coronavirus.

“We put up sneeze guards throughout the terminal between customers and employees [and] at the gate when you scan your boarding pass,” Mike Hanna, vice president of operations for United Airlines at O’Hare International Airport, told NPR.

Some airlines, like United, are shutting down their self check-in kiosk services to reduce the number of touch points at the airport, in addition to offering touch-free kiosk services to check bags. If you don’t want to interact with a gate agent to check in for a flight, make sure you check in and have your boarding pass for your flight on your phone.

TSA has been making adjustments throughout the pandemic to address health and safety concerns of fliers. One of the most obvious adjustments is that travelers can expect to practice social distancing while waiting in line at airport security checkpoints.

On May 7, TSA announced its staff must wear face masks at screening checkpoints. Travelers are allowed to wear face masks throughout the screening process, however a TSA agent may ask the traveler to pull it down to confirm their identity.

TSA is allowing passengers to carry on one liquid hand sanitizer, up to 12 ounces, until further notice.

Passengers can also ask TSA officers to change gloves during their screening process. The agency recommends travelers be particularly vigilant about following rules for carry-on bags if they don’t want officers to have to touch their belongings more than necessary.

“We are advising travelers to place personal items such as wallets, keys or phone in their carry-on bags to be screened through the X-ray system,” TSA said in a statement. “Anything that you’d hold up to your face that’s in your pockets — put those items in your carry-on bag, not in the bin.”

— You’ll have your temperature checked.

As one of COVID-19’s symptoms is fever, screening travelers’ temperatures with contactless infrared thermometers is becoming more common at airports around the world.

London’s Heathrow Airport is carrying out the screenings at some departure, the BBC reported. Hong Kong has been temperature screening arriving and departing passengers since April.

As of now, the only U.S. airline planning to check the temperature of passengers is Frontier. Earlier this month, the carrier announced that starting June 1, anyone with a temperature of 100.4 degrees or higher would not be permitted to fly.

Other airlines, including JetBlue and Southwest, are pushing for TSA to take passengers’ temperatures at the security check point. The International Air Transport Association is also a proponent of the practice for both travelers and staff.

— You’ll board with fewer people.

The choreography of boarding and deplaning may be different from what you are used to. Major airlines have announced changes in boarding procedures to encourage social distancing between passengers.

To avoid the usual crowds gathering in front of the boarding gate, Delta is boarding customers 10 at a time.

JetBlue is boarding passengers in the back of the plane first instead of its normal boarding procedure.

“This will help reduce the number of customers passing each other to get to their seats,” the company’s website said. “In addition, customers will be asked to remain seated upon arrival until the row in front of them has completely cleared before deplaning.”

While many people are still seeing far fewer passengers on board flights than before the pandemic began, the days of travelers flying on near-empty planes may be coming to an end. Last week, a photo went viral of a packed United flight. Now United says it will alert travelers if they’re going to be on a full flight, giving them the option to cancel or reschedule their trip.

“Because our schedule is so reduced (we’re only operating a single flight a day in some destinations), there are a small number of flights where our customers are finding planes fuller than they expect,” the airline’s website said. “We’ll do our best to contact [passengers booked on full flights] about 24 hours before their departure time so they can decide whether to adjust their plans before they arrive at the airport — and we’ll provide this option at the gate, if more than 70% of customers have checked in.”

Other airlines are capping seating to prevent crowding. Delta has pledged to cap seating at 50% in first class and 60% in Delta Premium Select, Delta Comfort+ and Main Cabin, and eliminated the middle seat as an option for seat assignment.

American Airlines introduced a “relaxed seating” policy that blocks 50% of the middle seats on each plane, as well as those near attendants’ “jump” seats.

Southwest starting reducing the number of available seats by a third on May 2.

“As a note, Southwest chose to reduce available seats rather than block middle seats so that families, and those traveling together, may still sit together while allowing others to space out among empty seats at comfortable distances,” the airline said in a statement.

Many airlines are making changes to their in-flight food and drink services.

“We’re paring down to essential onboard food and beverage options in an effort to reduce physical touch points between customers and employees,” Delta announced on its website. “Since many airport offerings are limited at this time, we recommend packing your own food items and encourage you to review TSA guidelines before bringing food through security checkpoints.”

Delta, among other airlines, is temporarily cutting ice, alcohol, snacks for purchase and special meal services. Some airlines, like Southwest, have eliminated food and drink services altogether. Pack food and a water bottle for your flight.

You may want to pack food for the airport, too.

“While some airport concessions have closed or have reduced hours due to the decline in passenger traffic, there are still many options for passengers to pick up food or make purchase retail items,” Becca Doten, managing director of media relations at Los Angeles International Airport, told The Washington Post in an email. “Restaurants are not offering table service, but will sell items that can be eaten while maintaining distance from others.”