Skip to content
TRAFFIC
Beware of standing water at intersections, including on Rainier Avenue South and on Northgate Way
By
JONATHAN EDWARDS
The Washington Post

WASHINGTON — First lady Michelle Obama considered wearing her hair in braids while living in the White House. But then she thought of the American people.

They were “just getting adjusted” to having a Black president in the Oval Office and a Black family in the White House, so she decided to keep her hair straight, Obama said at the Warner Theatre in Washington on Tuesday, the first of a 13-night cross-country tour to promote her new book, “The Light We Carry: Overcoming in Uncertain Times.”

It would have been easier to keep her hair in braids, Obama said, but “nope, they’re not ready for it,” she added, recalling her thinking at the time.

So she sacrificed doing her hair as she would have liked so her husband’s administration could focus on achieving its goals instead of sinking political capital into putting out a hairstyle-induced firestorm.

“Let me keep my hair straight,” Obama said of her mindset at the time. “Let’s get health care passed.”

Obama said her dilemma was an extreme example of the decisions Black women make daily to navigate the politics and sensibilities of their workplaces. They often find it easier, healthier and safer to wear braids, dreadlocks or Afros, but feel the pressure from White beauty standards and workplace norms to chemically straighten their hair for a more professional, “clean-cut” appearance. 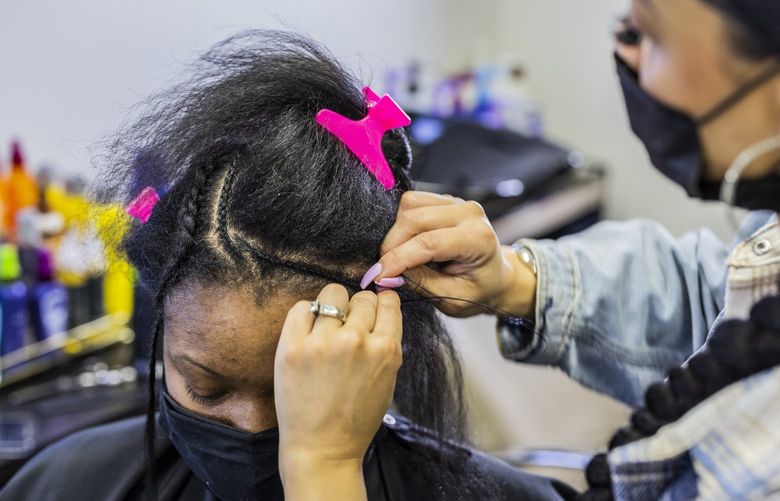 “We deal with it — the whole thing about, ‘Do you show up with your natural hair?’ ” Obama said.

Attitudes about natural Black hairstyles, such as braids and dreadlocks, have shifted. Earlier this year, the House passed the Crown Act, legislation that would prohibit discrimination based on someone’s hairstyle, including those “in which hair is tightly coiled or tightly curled, locs, cornrows, twists, braids, Bantu knots, and Afros.” Although the bill stalled in the Senate, Alaska in September became the 19th state to pass legislation to protect Black people from being punished for how they wear their hair.

California’s original Crown Act, which stands for “Creating a Respectful and Open World for Natural Hair,” passed in 2019.

Despite growing acceptance of naturally worn Black hair, stories about hair-based discrimination pop up regularly. In 2018, a 6-year-old Black boy was blocked from attending the first day of school because he wore his locs below his ears. Later that year, a referee forced a Black high school wrestler to cut his dreadlocks before letting him compete. In 2019, a TV reporter said her news director told her that her natural hair was “unprofessional” and pressured her to change it to “what looks best.”

Minda Harts, the founder of a career development company for women of color, told The Washington Post in 2019 about a conversation she had with a White headhunter bemoaning her struggles to recruit Black women to become corporate directors. When Harts asked her whether she would be more comfortable with a Black executive who wore a ponytail or a natural hairstyle like an Afro, the woman opted for the “clean-cut” ponytail.

“These unconscious and conscious biases keep us from even having the opportunity to have a seat at the table. We haven’t even had the chance to introduce ourselves, and there [are] these assumptions of unprofessionalism,” Harts said at the time.

“I’ll be honest with you: I wear my hair straight probably 99 percent of the time because, being in corporate America, I’ve seen how clients who have braids and natural hairstyles can be looked upon.”

On Tuesday, Obama discussed her hairstyle choice as sitting first lady with Ellen DeGeneres, who moderated the sold-out event. After citing the 2014 uproar over her husband’s tan suit, Obama imagined the fallout if she had changed her hairstyle, the Hill reported.

“Remember when she wore braids? Those are terrorist braids! Those are revolutionary braids!” Obama said, assuming the role of her critics.

Nearly six years removed from the White House, Obama is now wearing braids, something she showed off in the middle of her talk with DeGeneres by grabbing her hair and interjecting “Braids, y’all!” to applause from the crowd.