LOS ANGELES — Deaths from COVID-19 in Los Angeles County have soared over the last week, with officials saying some of the recent fatalities appear to be from the omicron variant.

The spread of the latest coronavirus variant has moved with unprecedented speed since December, although officials have said illnesses related to omicron produce milder symptoms than the earlier delta variant. Even so, officials say it is fatal for some.

Of 102 deaths reported Thursday — the highest single-day tally since March 10, 2021 — 90% involved people who became ill with COVID-19 after Christmas, and 80% were among those who fell ill after New Year’s Day, indicating a high likelihood of omicron infection, Los Angeles County Public Health Director Barbara Ferrer said. 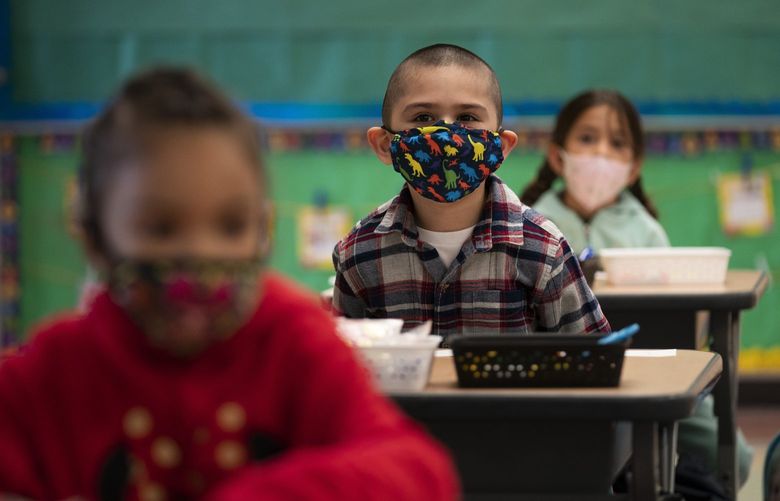 It appears that people who are dying from the omicron variant are deteriorating much quicker than those infected by earlier variants, Ferrer told reporters.

“It means that for the people who are, in fact, ending up passing away from COVID, if they were infected with omicron, it looks like they get hit pretty hard earlier on,” Ferrer said.

During the summer delta wave, COVID-19 patients were diagnosed with a coronavirus infection or started having symptoms four to five weeks before their deaths. But among fatalities reported late last week, many had an initial onset of symptoms or first diagnosis three weeks or earlier before their deaths.

“That’s a relatively short period of time between the time somebody gets infected, gets their symptoms and then passes away,” Ferrer said.

Over the seven-day period that ended Thursday, L.A. County is averaging 57 COVID-19 deaths a day, according to a Times analysis of state data released Friday. That surpasses the spring 2020 surge at the start of the pandemic, which maxed out at 50 deaths a day; the first summer surge, at 49 deaths a day; and last summer’s delta surge, which topped out at 35.

But last winter’s surge was significantly worse: About 240 deaths a day were reported in L.A. County.

There also are growing signs omicron has peaked in California. But officials expect hospitals to be challenged for days and weeks to come and deaths from the winter surge to continue.

“As cases and hospitalizations remain high, of most concern is the increase in deaths,” the L.A. County Department of Public Health said in a statement. Unvaccinated people in L.A. County were 23 times more likely to die from COVID-19 compared to those who are fully vaccinated, recent data show.

“Since the beginning of the pandemic, we have recognized that while many experience mild illness from COVID, there are others that will not do well if they become infected,” Ferrer said in a statement Friday.

Saturday also marked the third consecutive day in which the overall number of coronavirus-positive hospitalized patients dropped. There were 4,568 patients Saturday, down 5% from 4,814 recorded Wednesday.

And according to county data, new coronavirus cases are no longer climbing as exponentially as earlier this month. By Sunday, L.A. County was averaging 34,000 cases a day over the past week; more than a week ago, it was averaging 40,000 to 42,000 cases a day, a record high.

Still, case rates are not dropping evenly. Wastewater analysis indicates that while downtown and Westside areas show slightly lower levels of coronavirus, viral levels in the eastern and southern parts of the county are still high, Ferrer said.

The wastewater data correlates with areas now reporting the highest rates of coronavirus cases, including in South L.A., southeast L.A. County, East L.A., the northeastern San Fernando Valley and parts of the San Gabriel Valley. That’s a shift from December, when the county’s highest case rates were in wealthier communities along the Malibu coast, the Westside, the southern San Fernando Valley and the Hollywood Hills communities.

At that time, “those most likely to become infected often were travelers, those attending entertainment venues and those intermingling in places where many were close together while unmasked,” Ferrer said. “Some of the recent shifts associated with widespread community transmission likely reflect the fact that we’re now seeing increased transmission among those whose jobs are putting them in close contact with others and who often live in crowded housing.”

“It creates significant vulnerability for increased spread, not just among children, but among all of us,” Ferrer said.

With coronavirus transmission rates still extraordinarily high, health experts and officials are still urging people to do all they can to avoid getting infected: Wear masks in indoor public settings and avoid nonessential gatherings, especially indoors and in places where masks are not worn, such as in restaurants and bars.

In a study published in the journal Environmental Science and Technology Letters, Yale University researchers recently found that restaurant servers were exposed most frequently to airborne coronavirus particles compared to other workers in high-risk settings, according to a report summarizing the results of a study using mobile viral detectors clipped on their shirt collar for five days that accumulated virus-laden aerosols and droplets.

Of the 62 clips that were returned to researchers, five collected coronavirus. Four of them were worn by restaurant servers; and one by a homeless shelter staff member. Two of the sensors by restaurant waiters had exceptionally high viral load, “suggestive of close contact with one or more infected individuals,” said the report.

None of the clips worn by healthcare workers collected coronavirus, which researchers expected because of hospitals’ strict infection control requirements. The clips were in circulation in Connecticut in the first half of 2021.

Officials are urging people to get up-to-date on COVID-19 vaccinations and booster shots. While 3 million L.A. County residents 12 and older have received their booster shot, an additional 3 million are eligible but haven’t yet received one.

There is mounting evidence that putting off a booster shot is risky, as immunity to COVID-19 wanes in the months following the completion of the primary vaccination series.

Data presented by Dr. Rochelle Walensky, director of the U.S. Centers for Disease Control and Prevention, showed that for the omicron variant, two doses of the primary Pfizer-BioNTech or Moderna vaccination series resulted in effectiveness against hospitalization falling to just 57% more than six months after the second dose. A booster shot pushed vaccine effectiveness against hospitalization up to 90%.

Rong-Gong Lin II
Luke Money
The Seattle Times does not append comment threads to stories from wire services such as the Associated Press, The New York Times, The Washington Post or Bloomberg News. Rather, we focus on discussions related to local stories by our own staff. You can read more about our community policies here.
Advertising