WASHINGTON — Former President Donald Trump and his advisers repeatedly failed to turn over highly classified government documents even after receiving a subpoena and pledging a “diligent search” had been conducted, leading to an FBI raid of his Florida home that found more than 100 additional classified items, according to a blistering court filing by federal prosecutors late Tuesday.

The filing traces the extraordinary saga of government officials’ repeated efforts to recover sensitive national security papers from Trump’s Mar-a-Lago residence and club, centered around a storage room where prosecutors came to suspect “government records were likely concealed and removed … and that efforts were likely taken to obstruct the government’s investigation.” 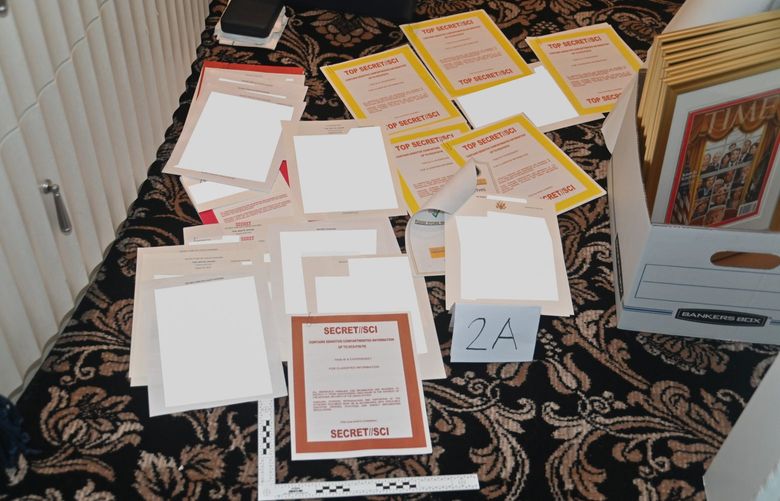 The agents also came to doubt claims by Trump’s team that the storage room was the only place where such documents might be found.

When agents conducted their court-ordered search on Aug. 8, they found material so sensitive that “even the FBI counterintelligence personnel and DOJ attorneys conducting the review required additional clearances before they were permitted to review certain documents,” the filing says.

Among the most incriminating details in the government filing is a photograph, showing a number of files labeled “Top Secret” with bright red or yellow cover sheets, spread out over a carpet. Those files were found inside a container in Trump’s office, according to the court filing. A close examination of one of the cover sheets in the photo shows a marking for “HCS,” a government acronym for systems used to protect intelligence gathered from secret human sources.

The 36-page filing also reveals, for the first time, the text of a written assurance given to the Justice Department by Trump’s “custodian of records” on June 3. It says Trump’s team had done a thorough search for any classified material in response to a subpoena, and had turned over any relevant documents.

Trump and his representatives gave the Justice Department 38 classified documents that day, the filing says, in addition to 184 others that were discovered in boxes sent to the National Archives earlier in the year.

The filing says Trump’s lawyer told Justice officials that all White House records that remained at Mar-a-Lago nearly 17 months after Trump left office were contained in the storage room, and that all boxes in the room had been searched.

Yet when FBI agents raided the Trump property in August, they found more than 100 additional classified papers, which, prosecutors wrote, “calls into serious question the representations made in the June 3 certification and casts doubt on the extent of cooperation in this matter.”

The filing offers the most detailed, blow-by-blow account to date of the interactions between Trump’s team and government officials, who over the course of many months became increasingly desperate to find and contain all of the classified material stashed at Mar-a-Lago.

In parts of the filing, using only their job descriptions, prosecutors paint Trump’s lawyer, Evan Corcoran, and custodian of records, Christina Bobb, as so uncooperative as to lead agents to suspect the Trump team might be obstructing the investigation.

The filing, for instance, says that when FBI agents and Jay Bratt, the chief of the counterintelligence and export control section at the Justice Department, met with Trump’s two representatives in early June, “the former President’s counsel explicitly prohibited government personnel from opening or looking inside any of the boxes that remained in the storage room, giving no opportunity for the government to confirm that no documents with classification markings remained.”

Yet earlier this month, Bobb told The Washington Post that the lawyers showed the federal officials the boxes, and Bratt and others spent some time looking through the material.

Trump made similar claims after the raid on social media, saying that his lawyers and representatives “were cooperating fully, and very good relationships had been established,” and adding that “The government could have had whatever they wanted, if we had it.”

The Justice Department filing also takes aim at Trump’s defenders who have said he had declassified the seized material while he was still president, or suggested that it might somehow be covered by executive privilege. At that same June 3 meeting, the filing states, “neither counsel nor the custodian asserted that the former President had declassified the documents or asserted any claim of executive privilege.”

Tuesday night’s filing comes before a hearing scheduled Thursday before U.S. District Judge Aileen M. Cannon on a request by Trump’s lawyers to have a special master appointed to review the files seized by the FBI.

The Justice Department notified the court Monday that a “filter team” of law enforcement officials had already finished their examination of any possibly privileged documents.

Trump’s legal team filed the request for a special master two weeks after the search, calling the court-approved law enforcement action a “shockingly aggressive,” politically motivated raid and claiming that federal authorities seized records to which they had no legal right.

In their filing Tuesday night, federal prosecutors pushed back on what they called “the wide-ranging meritless accusations leveled against the government” by Trump’s lawyers. The request for a special master was pointless, the government reasoned, because their review of the documents was already complete. The judge should reject Trump’s demands to get the documents back “because those records do not belong to him,” but are rather the property of the government, the filing said.

Trump’s legal team may file a response to the government’s motion later Wednesday.

Although Cannon, who was nominated to the bench by Trump in 2020, said on Saturday that she was inclined to appoint a special master, she also said her order “should not be construed as a final determination on Plaintiff’s Motion.”

FBI agents who conducted the search took 33 items of evidence, most of them boxes, according to the new filing, which said 13 of the boxes contained classified documents, some categorized as top secret. Avril Haines, the director of national intelligence, told lawmakers Friday that U.S. intelligence analysts will conduct a review of the classified materials to determine the potential risk to national security if their contents were disclosed.

According to a partially redacted affidavit unsealed Friday, the agents who conducted the search of Mar-a-Lago were seeking all “physical documents and records constituting evidence, contraband, fruits of crime, or other items illegally possessed in violation” of three federal laws, including a part of the Espionage Act outlawing gathering, transmitting or losing national defense information. The warrant also cites laws on destruction of records and concealment or mutilation of government material.

The search is part of a criminal probe into whether Trump and his aides took secret government papers and did not return all of them, despite demands from senior officials, and whether anyone obstructed government efforts to recover all of the classified material.

The Washington Post’s Rosalind S. Helderman contributed to this report.