FRANKFORT, Ky. — The mother was at home preparing cheese sticks and a milkshake when she got the call. On the other line, a prosecutor had surprising news about the man who had been convicted of repeatedly sexually assaulting her child and sentenced last year to 23 years in prison.

In one of his last acts in office, the outgoing governor, Matt Bevin, had weighed in on the case. Citing a lack of physical evidence and a “sloppy” investigation, Bevin issued an unconditional pardon. The convicted man, Micah Schoettle, 41, a close relative of the girl, had walked out of prison earlier that day.

The mother collapsed to the floor.

“I just kept saying, ‘How? How? How?’” recalled the mother, who asked not to be named to protect the identity of her teenage daughter, who said she was 9 when the assaults began. “He spent less time in prison than he did molesting my child.”

Bevin issued more than 600 pardons and reduced sentences in the final weeks of his administration. They included a number of cases in which the governor — in an extraordinary exercise of personal judgment that went well beyond typical governors’ pardons — released inmates serving time for serious crimes, based on his own conclusion that they had been wrongfully convicted.

Many of the clemency grants had been advocated by defense lawyers or justice advocates. But a review of pardon orders, court records and interviews with lawyers and Bevin administration officials shows that in a number of cases, Bevin stepped well beyond those recommendations, and in some instances made his decision without a single consultation with prosecutors or the families of victims.

In the case of Schoettle, Bevin inflamed controversy further this week when he said in interviews with a radio station and with The New York Times that there was no evidence that the girl had been raped, in part because her hymen was intact — a factor most experts on sexual assault consider inconclusive. 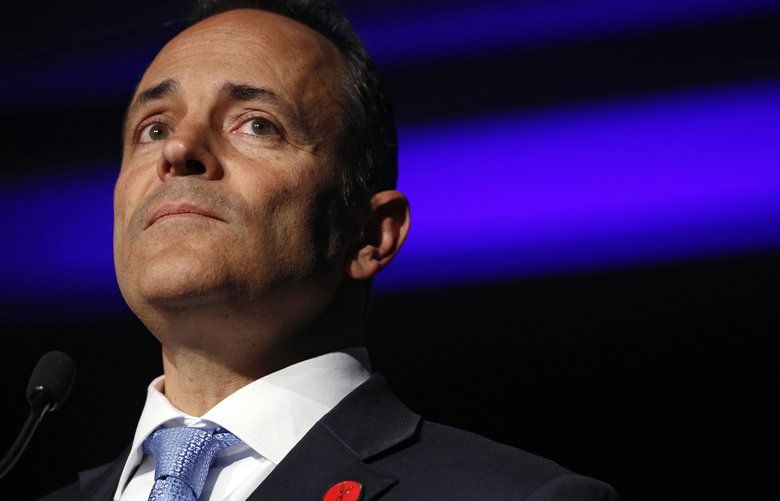 “You have police, FBI, judges, prosecutors, defense lawyers, hours and hours of work undone on the whim of one person,” said Leland Hulbert, who prosecuted a case in which the governor issued a pardon based not on innocence, but in order to offer a second chance. “It’s almost like a godlike power.”

Such a unilateral approach was not uncharacteristic for Bevin, a businessman who burst into Republican politics several years ago styling himself as a righteous outsider who would fix a corrupt system. He went on to butt heads with everyone from Kentucky schoolteachers to his own party’s lieutenant governor, a my-way-or-the-highway approach to governance that ultimately got him voted out of office in November.

His final flurry of clemency grants amounted to a remarkable act of reprieve, both in volume and nature. Experts say it is unusual to issue so many clemency grants at the very end of a term, and particularly unusual for a governor to act as the personal arbitrator on wrongful conviction claims, even more so in cases, such as Schoettle’s, still making their way through the appeals system.

“It’s one person’s call at the end of the day,” Bevin said in an interview. “Did I seek a lot of input from a lot of sources? Yes. But it still rode on the shoulders of one person.”

Not all of Bevin’s pardons have been the subject of controversy. More than half of those that he granted clemency were low-level offenders released from overcrowded jails and prisons as part of a planned mass commutation. Others were pardoned after years out of prison, and some of those released early had been championed by groups like the Innocence Project or recommended by the state public defender.

Officials described the governor in his last days sitting in an office among stacks of pardon applications, peppering aides with text messages at all hours about the details of this or that case. Bevin said he had been looking at some of the cases for months, especially those in which he went further than the courts by ruling that a person had been wrongfully convicted.

“The clemency power is the traditional last resort,” said Margaret Love, a former federal pardon attorney. “If there is truly a case for innocence or unfairness, it’s usually going to be caught by the courts. And if it isn’t caught by the courts, I would recommend a really thorough and pretty public examination of individual cases to determine innocence.”

As news of the decisions began trickling out, criticism focused quickly on clemency recipients who had wealth or influential family connections.

For example, Elizabeth Stakelbeck, a friend of Bevin’s sister, was pardoned after being convicted in a 2013 plot to hire a hit man to kill her ex-husband and his new wife. Bevin’s sister had testified on her behalf in a related case, telling the court that her friend was a “changed person.”

Few cases drew more attention than that of Patrick Baker, after The Louisville Courier Journal reported that Baker’s relatives hosted a political fundraiser for the governor at their home last year. Baker had been convicted in a 2014 homicide but argued that he had been framed by the police, a claim supported by the Exoneration Project in Chicago.

Bevin insisted there was no impropriety in any pardons.

“This is about doing the right thing,” he said in the interview. “It should be based on the merits and the merits only.”

An unpopular governor angers more on the way out

To his defenders, including unlikely liberal allies who support criminal justice reform, the outgoing governor showed unusual courage in righting the wrongs of a broken system.

But his critics say that he displayed reckless arrogance in some of his decisions, and legislators from both parties have since called for investigations and discussed amending the constitution to curtail the pardon authority for future governors.

“For those of us who want to see governors use their clemency power more robustly, process still really matters,” said David Singleton, a professor at Northern Kentucky University’s law school.

Denver Butler, a former police officer and state representative who became an adviser to Bevin on criminal justice issues, said he and the governor had long hoped to set up a statewide conviction integrity unit to examine questionable verdicts. After Bevin failed in his reelection bid, Butler said, they were presented with “a finite window” to address what they could.

Still, in taking on claims of innocence alongside the commutations of low-level offenders and those serving overly harsh prison terms, Bevin was discounting the advice of some senior members of his administration.

“With days and hours to get this done, we didn’t think we could launch an innocence project,” said John Tilley, the head of Bevin’s Cabinet on justice and public safety.

In at least a handful of cases where Bevin saw clarity, there was far from unanimous agreement.

The governor found ‘no evidence.’ The prosecutor said he didn’t ask.

In one case, Bevin released a man who was serving a 15-year sentence for sodomizing a teenage boy at a party in 2014.

The man, Dayton Jones, now 25, had pleaded guilty alongside three other young men, who together were accused of using a sex toy in the assault and then sharing video of the incident on social media. The boy, who was passed out at the time, later had to have lifesaving surgery, prosecutors said.

While the other defendants implicated Jones, he was not captured on the video. “It was not possible he could have been there doing this,” Bevin said in the interview. “There was no evidence showing that he was.”

But Jon Heck, a special prosecutor in the case who said he had not been contacted by Bevin’s office, said there was plenty of evidence: Independent witnesses told the police that Jones had assaulted the boy, Heck said, and prosecutors had obtained texts from Jones in which he acknowledged being part of the assault.

“There was no question he was guilty,” Heck said.

Jones’ grandfather, Tony Jones, who owns a storage trailer rental business in Hopkinsville, Kentucky, said the family had fought for their grandson for years, making the case that he was at the party but not present for the assault. They spent hundreds of thousands of dollars to try and clear him.

On a couple of occasions, he said, they had attended political events hoping to talk with Bevin, but never got the chance. Finally, he said, the family submitted a pardon application about six weeks ago. The governor’s office responded, requesting more information. The elder Jones and his wife ended up submitting more than 400 pages of records.

“We feel good about it,” he said after his grandson had been released. “He’s making the best out of a bad situation.”

But the decision left many others baffled.

“It’s outrageous,” said Brandi Jones, a lawyer who represented one of the co-defendants who remained in prison. “There is no other word for it.”

A mother asks, ‘What happened to my child’s rights?’

One of the difficult cases to land on the governor’s desk was the 2016 arrest of Schoettle, whose late stepfather was a former chairman of the Bank of Kentucky and whose mother served until recently on a state legislative ethics commission.

The girl accused Schoettle several months after she said the abuse had stopped, and all parties agree that there was no physical evidence or independent witnesses in the case.

Deanna L. Dennison, an appeals lawyer in his case, questioned why DNA testing had not been done in the bedroom where the abuse was reported to have occurred over several years. “What investigation did they do?” she said. “They took a 13-year-old’s word for it, and that was it.”

The Kentucky Innocence Project also believed there were “forensic issues,” but had held off on taking the case while the appeals process played out, the project’s director, Suzanne Hopf, said.

Prosecutors in Kenton County cited research that it was not uncommon for child victims to delay reporting, and that many abused children do not show signs of physical injury when tested. The girl testified from the stand.

“This little girl was raped repeatedly over three years, and I’m not about to call her a liar just because she didn’t call police as soon as it happened,” said Rob Sanders, the Kenton County commonwealth’s attorney. “I trust the collective wisdom of 12 citizens of Kenton County much more than I do the ignorant opinions of Matt Bevin.”

Bevin said he came to the decision after considering the case for a year. If he had been looking at it for that long, he consulted neither the prosecutor nor the family of the victim.

The child’s mother said the first time she heard about Schoettle’s release was when the prosecutor called her after the fact.

“What happened to my child’s rights?” she said. “To feel safe?