The chief of police for Brooklyn Center, Minnesota, where Daunte Wright, a 20-year-old Black man, was fatally shot by a white officer Sunday, said Monday that the shooting was an accident. The officer, Kimberly A. Potter, a 26-year veteran of the force, had intended to deploy her Taser, the chief said at a news conference, but had shot her service pistol instead.

Tasers look and feel different from pistols in a number of ways, and most police forces — including Brooklyn Center’s — have standard precautions and protocols in place to prevent the sort of mix-up that can be deadly. 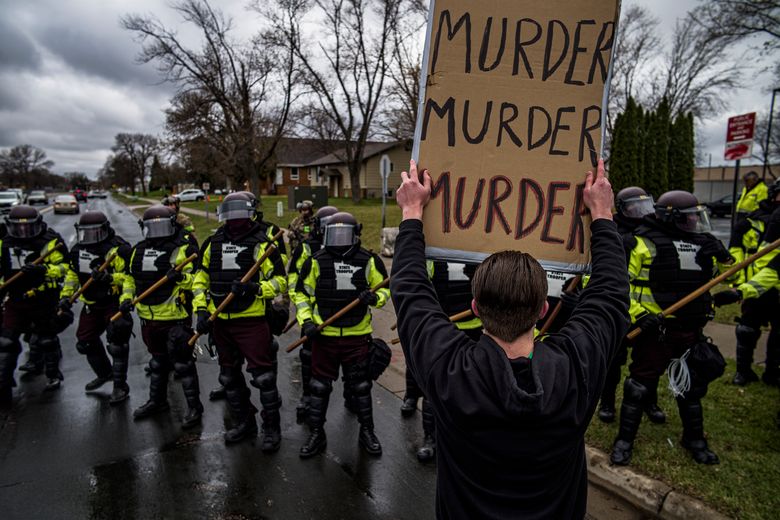 Tasers are often produced in bright colors, or with neon accents, to distinguish them from pistols. The Brooklyn Center Police Department manual cites the Glock 17, 19 and 26 as standard-issue for the department. All three pistol models weigh significantly more than a typical Taser. Glocks also have a trigger safety that can be felt when touching the trigger. Tasers do not. Grips on Tasers are typically different from those of firearms, as well, though they may feel similar because both are usually made of a similar type of polymer.

“If you train enough, you should be able to tell,” said Scott A. DeFoe, a retired sergeant with the Los Angeles Police Department.

Wright was shot during a traffic stop less than 10 miles from the courtroom where the trial of Derek Chauvin, the Minneapolis police officer charged with murdering George Floyd last May, is being held. The police in suburban Brooklyn Center said Wright was initially stopped for driving a vehicle without current registration, and then detained after they determined that a warrant for his arrest had been issued, stemming from a missed hearing on a misdemeanor gun charge.

A clip of Potter’s body camera video released by the Brooklyn Center Police Department shows the police trying to handcuff Wright before he lurches suddenly back into his car. The video then shows Potter’s arm aiming a weapon as her voice shouts “Taser! Taser! Taser!” on the audio.

She fires one round, Wright groans in pain and Potter can then be heard to cry out, “Holy shit, I just shot him.”

Brooklyn Center Police Department protocol dictates that officers wear their guns on their dominant side and Tasers on the opposite side of their bodies, to reduce the risk that they will confuse the two weapons.

In most cases in which an officer grabs a pistol instead of a Taser, the confusion occurs under particular circumstances, said Ed Obayashi, an expert in the use of police force and a California deputy sheriff with a legal practice. It can happen when officers carry both weapons on the same side of their body, he said, or when they holster their stun guns on the opposite side of their body in such a way that it is easier for them to reach across their bodies with a dominant hand and cross-draw.

In both cases, he said, the officer can become accustomed to using the same hand to draw either weapon, a habit that can make it harder to tell one from the other in high-pressure situations when muscle memory and instinct kick in.

Body-camera footage from the scene of Wright’s killing does not show how Potter carried her weapons. But Obayashi said it does show her fellow officer with his gun on one side of his body and his Taser on the other side, holstered so that either weapon could easily be grabbed by his dominant hand.

The Brooklyn Police Department policy manual states that “all Taser devices shall be clearly and distinctly marked to differentiate them from the duty weapon and any other device.” The manual also says that “officers should not hold both a firearm and the Taser device at the same time.”

It appears that several aspects of how Potter handled her weapons may have violated the protocol laid out in the manual, even if she had drawn her Taser and not her firearm.

The manual advises that the device should not be used against people “whose position or activity may result in collateral injury” — including people who are “operating vehicles.” Wright was sitting in the driver’s seat when Potter fired, and his car traveled several blocks after he was shot.

The manual also says that “reasonable efforts should be made to target lower center mass and avoid the head, neck, chest and groin” if an officer is using a Taser. Wright died of a gunshot wound to his chest, according to the Hennepin County medical examiner.

There have been other instances of a police officer intending to deploy a Taser and discharging a firearm instead, though such errors are not common.

In 2018, a rookie Kansas police officer mistakenly shot a man who was fighting with a fellow officer. In 2019, a police officer in Pennsylvania shouted “Taser!” before shooting an unarmed man in the torso. And in 2015, a former Oklahoma reserve deputy killed an unarmed man when he mistook his handgun for a stun gun.

Greg Meyer, a retired captain in the Los Angeles Police Department and a use-of-force expert, documented nine similar instances from 2001-09 in a 2012 article published in a monthly law journal produced by Americans for Effective Law Enforcement, a nonprofit.

In most cases, there has been little or no jail time for officers disciplined or tried for wounding or killing someone in situations in which they said they had mistaken a gun for a Taser. In the Pennsylvania case, for example, the district attorney said the officer violated a policy requiring officers to wear their Tasers on the side opposite their firearms. Still, he said the officer “did not possess the criminal mental state required to be guilty of a crime under state law.”

One of the most widely known cases happened in 2009 in Oakland, California, when a white Bay Area transit officer shot and killed an unarmed Black man on New Year’s Day at the Fruitvale Station of the city’s BART line. The man, Oscar Grant III, was lying facedown when the officer shot him.

The officer who killed Grant later contended that he had meant to pull his Taser but had pulled his firearm instead. He was found not guilty on charges of second-degree murder and voluntary manslaughter, and convicted of involuntary manslaughter. He served 11 months in prison.

“Daunte Wright is another Oscar Grant,” an uncle of Grant, Cephus Johnson, tweeted Monday. “We seen this before and know exactly how it will play out.”