ROME, Ga. — Many top Georgia Republicans watched with dread — but took little action — as Marjorie Taylor Greene rose from long-shot candidate to the cusp of Congress. Shortly after her victory in Tuesday’s nationally watched runoff, Greene showed why she made them so anxious.

In a hotel ballroom crowded with about 100 supporters, Greene promised to be the “worst nightmare” to the liberal left and news media that “hates my guts.” Then she turned her focus on U.S. House Speaker Nancy Pelosi in a way that went beyond the usual red-meat rhetoric.

“She’s a hypocrite. She’s anti-American,” Greene said. “And we’re going to kick that bitch out of Congress.”

Greene’s runoff win over John Cowan, a Rome neurosurgeon, virtually assures that she’ll represent the deeply conservative northwest Georgia district in the U.S. House. And it means Democrats have a new favorite target: a believer in convoluted QAnon theory who has expressed anti-Semitic, racist and xenophobic views. 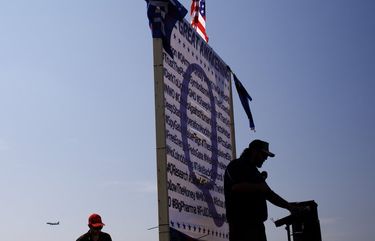 Analysis: Think QAnon is on the fringe? So was the Tea Party.

With tight races up and down the ballot, Democrats quickly tried to brand her as the face of the Georgia GOP — and tie her to more vulnerable Republicans running for office in November.

U.S. Rep. Cheri Bustos, the chairwoman of the political arm of House Democrats, called Greene a “next-generation Steve King,” comparing her to the ousted Iowa Republican with a history of anti-immigrant and racist remarks. Scott Hogan, the executive director of the Democratic Party of Georgia, said “Republican extremism” won the night.

“Georgia Republicans own this crisis,” he said, “and their mealy mouthed statements can’t hide the fact that Marjorie Taylor Greene’s nomination is a stain on their party.”

President Donald Trump offered a different assessment in a post-runoff tweet, calling Greene a “future Republican Star” who is “strong on everything and never gives up — a real WINNER!”

Recruited from the ‘burbs

This was no underdog victory for Greene, a wealthy construction executive. She finished first in the jumbled primary to represent the 14th District and spent nearly $1 million of her own cash on her bid. She was heavily favored to defeat Cowan, who garnered just 20 percent of the vote in June.

But her win wasn’t always a foregone conclusion. For much of last year, she was struggling to compete against former U.S. Rep. Karen Handel for the GOP nod in a suburban Atlanta district. When U.S. Rep. Tom Graves announced he would retire, she was recruited to switch races.

“Then I started getting phone calls from the most conservative members in the House Freedom Caucus. Debbie Meadows — (now White House chief of staff) Mark Meadows’ wife — Jim Jordan, Andy Biggs,” she told The Atlanta Journal-Constitution in December, invoking members of that conservative group.

“They have asked me to heavily consider stepping out of the 6th District and coming in and running in the 14th,” she said.

Greene moved to Rome and joined a crowded field of candidates that lacked an odds-on favorite. Local mailboxes were soon jammed with her flyers, airwaves filled with her radio ads, social media feeds packed with mentions of her slogan: “Save America. Stop Socialism.”

As she gained traction, her history of hateful comments got more scrutiny.

Among them: She insinuated that the 2017 Las Vegas massacre was orchestrated, warned of an “Islamic invasion” after two Muslims won congressional races, described Black people as “slaves” to Democrats and last week defended a lie that George Soros turned over Jews to the Nazis.

What’s perhaps attracted the most attention, however, is her belief in the far-right pro-Donald Trump QAnon conspiracy theory that the FBI has labeled a potential domestic terrorism threat.

Some Republican members of the U.S. House denounced her comments as “disgusting,” “offensive” and “bigoted,” and several backed Cowan, who cast himself as a staunch conservative who wouldn’t embarrass the district.

But most of Georgia’s Republican elite stayed noticeably neutral.

Gov. Brian Kemp and U.S. Sens. Kelly Loeffler and David Perdue didn’t take sides. Nor did Graves, who remains deeply popular in a district he carried with 77 percent of the vote in 2018.

Asked at an event last week in the northwest Georgia town of Resaca whether he had a favorite in the race, U.S. Rep. Doug Collins artfully dodged the question.

And in an interview Wednesday, House Speaker David Ralston declined to comment on Greene but said Georgians should be cautious about tying her to down-ballot candidates.

“I worry about anything that could be harmful to my caucus members,” he said. “I would ask voters to not hold their views about one candidate against the entire ticket.”

In the hours after Greene’s runaway victory, some Republicans had buyer’s remorse. One Republican candidate half-jokingly asked if the news media could simply ignore Greene. Another senior Georgia GOP official said she would haunt the rest of the ticket.

“Her winning the primary is the best news Democrats could ask for,” said the official, who requested anonymity. “Greene’s victory is going to be an anchor around every Republican who is relying on votes in metro Atlanta.”

Her winning the primary is the best news Democrats could ask for. Greene’s victory is going to be an anchor around every Republican who is relying on votes in metro Atlanta.”
– anonymous Georgia GOP official

“Get ready GOP, you’ll be spending a lot of time answering questions about her crazy comments,” he said.

“Marjorie Taylor Greene will win this fall. But it could come at a big cost: to the extent she becomes a prominent face of GA’s GOP, she could accelerate the party’s erosion in the ATL’s suburbs,” he remarked on social media.

Many Georgia Republicans will now try to distance themselves from her, though Collins and Loeffler congratulated her on social media.

Cowan and his allies, meanwhile, were left wondering what might have been if the full weight of the Georgia GOP had rallied behind his campaign.

In interviews with more than a dozen Cowan supporters, two themes stuck out: They worried that Greene’s hateful rhetoric would embarrass the district, and they appreciated the neurosurgeon’s deep roots in the community.

“If she’s that sneaky, what’s she going to do for us once she gets in there,” Richard Rogers, a Resaca retiree, said of Greene’s decision to switch races. “The way I look at it, the 6th District will have two representatives and we won’t have any.”

About 100 of Cowan’s closest allies gathered late Tuesday at a balmy rooftop in downtown Rome to munch on bite-size cannolis as they watched the returns. It would be an early night: Even before Floyd County’s polls closed at 9 p.m., a sense of impending defeat was etched on their faces.

Across the river, the crowd gathered at Greene’s party was jubilant as returns showed she was steadily building an insurmountable lead. Republican activist Pamela Reardon saw vindication in Greene’s success.

“The best person won because we are the real conservatives in this race,” Reardon said in an interview. “She’s never going to waver from her values.”

In a first-floor ballroom, speaking to a maskless crowd, Greene seemed to relish her victory lap. She leveled broadsides at the “D.C. swamp” and the news media, lingering on the latter for an extended period.

Then she sent a blunt message that she’s not about to play nice with her own party over what she sees as wishy-washy values and pandering to special interests.

Greg Bluestein
The Seattle Times does not append comment threads to stories from wire services such as the Associated Press, The New York Times, The Washington Post or Bloomberg News. Rather, we focus on discussions related to local stories by our own staff. You can read more about our community policies here.
Advertising