WASHINGTON — Sen. Patrick Leahy, the longest-serving senator and Appropriations Committee chairman, could only growl his frustration to reporters Wednesday as a small clutch of congressional Republicans threatened to delay a short-term government funding patch and spark a partial federal shutdown at midnight Friday.

“I’m just worried that there are some Republicans who have forgotten the disaster the last time they shut down the government,” said Leahy, D-Vt., referring to a 16-day shutdown in 2013, prompted by conservative lawmakers on an ill-fated quest to block implementation of the Affordable Care Act.

Leahy’s worries were not misplaced: This week’s shutdown threat, which was averted with a Senate vote Thursday night, was not only just as quixotic — aimed at forcing President Joe Biden to sign a bill blocking his own coronavirus vaccine mandates — but is being led by some of the same Republican plotters. 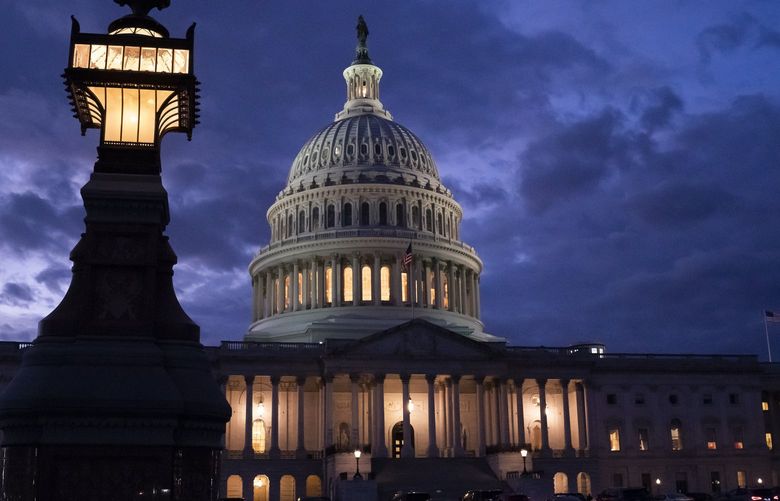 They included Sen. Ted Cruz, R-Texas, the lead architect of the 2013 shutdown, and Sen. Mike Lee, R-Utah, as well as Reps. Jim Jordan, R-Ohio, and Chip Roy, R-Texas, who served as Cruz’s top legislative strategist in 2013.

“We should use every tool we have to protect people’s rights,” Cruz thundered to reporters Wednesday. “The vaccine mandates are illegal, they’re abusive and they’re hurting this country.”

This week’s Senate gridlock, however, amounted to more than simply getting the old band back together for one more gig. After a 10-month flurry of legislating, it heralded a potentially excruciating new era of governing for President Biden and other Democratic leaders, who must deal not only with an emboldened GOP leadership that sees House and Senate majorities well within their grasp, but a cadre of conservatives eager to hijack the basic processes of government if only to make a point.

Freshman Sen. Roger Marshall, R-Kan., who led the effort with Cruz, acknowledged Thursday that any shutdown would be merely symbolic, “a temporary thing” that would end once the Senate plods through some weekend procedural votes.

“But, you know what, I hear from Kansans. They want to know, are Republicans fighting for them? Where’s the fight?” he said. “And I’ll be doggone if I’m going to get rolled on this right now without a fight.”

That attitude was also on display this week as the annual defense policy bill became snagged on the Senate floor over an amendment dispute, with several Republicans demanding votes on their own favored items.

By Thursday, all but one — Sen. Marco Rubio, R-Fla., who is seeking to attach a bill cracking down on Chinese forced labor — had been satisfied. But one holdout was enough to delay action further.

“What they want is a vote that lets them say I voted for it, but it never becomes law. Ain’t going to work with me,” he said.

House Republicans have made opposing anything Democrats do a litmust test for loyalty to the party, meaning Democrats and their slim majority will likely have to do all the legislative lifting themselves regardless of the issue for the remainder of this Congress. Only one Republican, Rep. Adam Kinzinger of Illinois, voted Thursday to keep the government open even though the stopgap funding resolution kept in place the funding levels enacted under then-President Trump.

“Shut it down,” Rep. Marjorie Taylor Greene, R-Ga., a Trump ally, implored her colleagues from the House floor Thursday.

Meanwhile, action to increase the debt ceiling past Dec. 15 remained in doubt this week, with key Republicans — including Senate Minority Leader Mitch McConnell, R-Ky. — continuing to insist that they will not consent in any way to an increase.

That could force Senate Democrats to engage in a convoluted legislative process in the coming weeks to avoid a federal default that would rattle the fragile economy. But the politics could get even more cutthroat: Trump has publicly urged McConnell and other Republicans to use the debt ceiling as leverage in an exceedingly unlikely bid to force Democrats to abandon their nearly $2 trillion domestic policy bill known as Build Back Better.

“Use the Debt Ceiling, Mitch, show strength and courage,” Trump said in a Tuesday statement. “Our Country is being destroyed.”

The basic obligations of government have been complicated business on Capitol Hill for more than a decade now, since Republicans swept into the House majority in 2011 under President Barack Obama, and proceeded to use appropriations deadlines and the federal debt limit as leverage to highlight conservative policy goals.

Democrats dallied with those tactics themselves in 2018, forcing a brief shutdown over immigration policy, and then fully embraced them after winning back the House majority — holding firm against Trump’s demand for a nearly $6 billion border wall in a clash that ultimately forced Republicans to back down after a record 35-day federal shutdown.

But Democrats also cut deals with Trump to increase federal spending, raise the debt limit, and otherwise keep the wheels of government turning even as they moved to block his many controversial policies.

And when Biden took office in January, with a razor-thin Democratic Senate majority to match, there were some early indications that smoother sailing was possible. Democrats quickly pushed through a $2 trillion stimulus bill, the American Rescue Plan, and Biden was able to clinch a bipartisan infrastructure accord while the rest of his agenda proceeded on a separate, partisan track.

The Senate, meanwhile, advanced hundreds of billions of dollars in additional federal industrial investment aiming at blunting China’s rise as a world power. That bill is expected to be merged with House efforts and passed early next year.

But this week’s antics demonstrated to some Democrats that the good times are unlikely to roll, especially going into midterm elections where dismal approval ratings for Biden, redistricting advantages and encouraging off-year election results have Republicans expecting major gains.

On deck is not only final passage of the expansive Build Back Better bill and a debt ceiling increase, but also passing full appropriations legislation for fiscal 2022. The stopgap passed Thursday night punts the shutdown deadline into mid-February, but there is little sign that Democrats and Republicans are close to an accord on new levels of federal spending. Absent an agreement, spending levels agreed to under Trump could remain in place indefinitely.

The passage of the infrastructure and China bills “genuinely encouraged many of us who know that we need to prove that democracy can work,” said Sen. Chris Coons, D-Del. “But it looks like we may now be sliding back into what I’ll call shutdown politics.”

Coons, who came to Congress in 2011 alongside the new GOP House majority, said those years of split government — with congressional Republicans constantly feuding with then-President Barack Obama —were “enormously frustrating, but still far more productive than we are today — many more amendment votes, many more bills moving through.”

The gridlock has extended to Biden’s personnel. While Democrats blocked consideration of a broad swath of Trump’s nominees, key Republicans have expanded their opposition to some of Biden’s diplomatic and national security nominees. And on Thursday, senators took their first floor vote on a U.S. attorney nominee in 28 years due to GOP opposition.

The aggressive tactics are dovetailing with a push among Democrats to reassess the Senate’s rules and at least consider modifications to the filibuster, the 60-vote supermajority requirement for most legislation. That rule has been modified by both parties over the course of several decades, and the threats on display this week prompted some Democrats to muse about further changes.

“If this fundamental institution where we work our sort of exercise in self-government can’t get the basic things done, like keeping the lights on, we’re going to have a really hard time competing with China,” said Sen. Michael Bennet, D-Colo. “That may require changing the way the Senate operates.”

Among the ranks of the exasperated is Senate Majority Leader Chuck Schumer, D-N.Y., who vented late Wednesday night after Rubio blocked a bipartisan deal on the defense bill that would have incorporated dozens of amendments into the legislation and set up votes on about two dozen more.

“It is regrettable. It is sad. It undoes the work of so many senators on both sides of the aisle,” he said. “And it speaks to the need to restore the Senate and change these rules.”