After being denied several million dollars raised on GoFundMe, organizers of a trucker-led protest disrupting life in Canada’s capital have found a new platform: a Christian crowdfunding site where they raised more than $3.5 million in two days to demonstrate against the country’s vaccine mandate.

The new fundraiser hosted by GiveSendGo, which describes itself as the “#1 free Christian crowdfunding site,” reported Sunday that the “Freedom Convoy” campaign had raised several million dollars two days after GoFundMe announced that it was freezing more than $8 million in donations to the cause, a move that led Republican officials in the United States to announce investigations.

The rapid influxes of donations have prompted questions about the origin of the funds and sparked concerns among analysts about the use of the online platforms for financing fringe organizations that could allow the interference of foreign entities.

The convoy began as a protest to U.S. and Canadian rules requiring that cross-border truckers be fully vaccinated to enter either country, and it turned into a movement against many public health measures. The demonstrations have drawn praise from Republican leaders in the United States and left residents on edge – with police saying some have been subject to racist vitriol.

Related More on this story 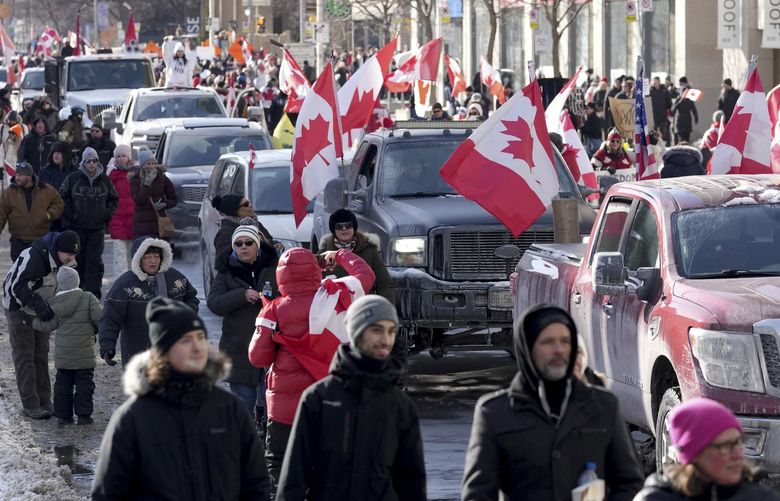 On Sunday, Ottawa declared a state of emergency as protesters in big-rig trucks blocked streets, shot off fireworks and blared horns.

The convoy is benefiting from national and international logistical and financial support, including from a “significant element” in the United States, Ottawa Police Chief Peter Sloly said last week.

“They have converged in our city, and there are plans for more to come,” Sloly said, adding that the participants, who include locals and other Canadians, are “putting our city and our residents, our partners and our officers at great risk.”

As of mid-Saturday, the Ottawa Police Service reported a thousand vehicles, about 5,000 protesters and at least 300 counterprotesters in the city’s streets.

GoFundMe said Friday that it had removed a fundraiser for the convoy that had raised more than $8 million because it violated its terms of service. The company said it had released an initial $1 million in donations to Freedom Convoy organizers last week after they provided a clear distribution plan and confirmed that they would only be used for those participating in a peaceful protest.

But after receiving evidence from law enforcement that the “previously peaceful demonstration has become an occupation,” the company said no additional funds would be distributed to its organizers and instead donors would have two weeks to submit a request for a refund, the company said. GoFundMe then would work with convoy organizers to send the remaining money to other charities.

GoFundMe’s decision aroused conservative ire on both sides of the border, drawing special scrutiny from several Republican attorneys general, who pledged to investigate the platform.

On Friday evening, minutes after West Virginia Attorney General Patrick Morrisey (R) asked residents who have “been victimized by a deceptive act or practice” to report it, Donald Trump Jr. tweeted that “All GOP Attorney Generals” should follow suit.

By Sunday, at least four other states – Florida, Louisiana, Ohio and Texas – had done just that, promising to investigate GoFundMe for allegedly deceptive practices.

The threats of an investigation continued even after the platform announced Saturday that it would refund all contributions automatically amid the donor backlash. The company did not respond to an inquiry Sunday from The Washington Post.

“What they publicly proposed to do is unfair and potentially a violation of Ohio law,” Ohio Attorney General Dave Yost (R) said in an interview with The Post. “I’m glad that they didn’t go there, but that doesn’t mean that they’ve agreed in other instances to do the right thing. So we need to look in at the policy and practice of the company.”

Yost has directed his office to collect testimony from Ohioans to determine whether the company ran afoul of trade laws. After that process is complete, Yost will decide whether to file a lawsuit against GoFundMe. He said he wants to ensure that future donors won’t run the risk of having their money rerouted to a different cause.

“What are you going to do next time when it’s not as visible a thing and you decide to pull out of a fundraiser for your own purposes?” Yost said, adding that the automatic refund “shouldn’t just be a result of public pressure, that should be the way they do business.”

Texas Attorney General Ken Paxton (R) said his office has “assembled a team to investigate” potential wrongdoing, and Florida Gov. Ron DeSantis (R) said he would direct his attorney general to do the same.

“I share the concerns of @WestVirginiaAG. My office will be looking into whether or not #GoFundMe violated our state law,” Louisiana Attorney General Jeff Landry (R) tweeted.

The attorneys general variously accused GoFundMe of fraud, deception and of playing political favorites with the fundraising efforts it chooses to promote.

All five who have spoken out have also previously opposed federal vaccine mandates, suing the Biden administration over its inoculation rules. Paxton has cast the issue in political terms, calling GoFundMe a “BLM-backing company” that “went woke,” referring to the Black Lives Matter movement and echoing right-wing rhetoric about social media platforms such as Facebook and Twitter.

Sen. Ted Cruz, R-Texas, said Sunday that he has sent a letter to the Federal Trade Commission asking it to investigate the platform. Other critics included SpaceX and Tesla chief executive Elon Musk, who shared a meme calling GoFundMe “professional thieves.”

Back in Canada, security analysts warned of the unintended effects of using crowdfunding platforms, including allowing foreign state actors or individuals to interfere in domestic affairs.

“Starting with the size and scale of the campaign itself, it is unprecedented in Canadian history for campaigns of this nature to be able to raise so much money in the short period of time,” Jessica Davis, a financial crime analyst and president of Insight Threat Intelligence, said Sunday. “It raises a lot of questions of where is the influence of this campaign coming from and whether this crowdfunding activity is organic in nature or not.”

She said it was “unbelievable that this number of Canadians support the protest in this way.”

She added that a definitive analysis of who is financing the protests and whether there has been foreign interference are virtually impossible because all publicly available information on GoFundMe lacks identity verification.

If such interference were confirmed, it would indicate “a lack of available laws and the enforcement of existing laws in terms of preventing foreign interference” from individuals, states, political parties and other interest groups.

Davis underlined how the “sheer volume of the money being raised” will allow the protests to continue for “an indefinite amount of time,” because demonstrators have plenty of supplies, including lodging, food and fuel.

“To our fellow Canadians, the time for political overreach is over,” a post on the GiveSendGo campaign said. “We are taking our fight to the doorsteps of our Federal Government and demanding that they cease all mandates against its people.”

GiveSendGo did not immediately respond to a request for comment Sunday.

The Post has reported how the website has become a refuge of sorts for outcasts and extremists, including conspiracy theorists and fringe groups such as the far-right Proud Boys, which Canada has designated a terrorist entity.

Stephanie Carvin, an associate professor of international relations at Carleton University in Ottawa, said Sunday that the support from anti-vaccine groups and GOP officials shows how the convoy could be used for political purposes in the United States.

“U.S. politicians probably don’t understand what is really happening here and see this as a way to show support for their base,” she said. “It’s foreign interference . . . and it should be viewed through the frame of culture wars.”

Carvin, a former national security analyst, added that the convoy “is exactly the kind of event that intelligence services have warned us for years that foreign governments would try to amplify.”

Like Davis, she said there is no definitive evidence of foreign interference directing the protests, and even if there were, “this is a Canadian movement, pushed by Canadians, participated in by Canadians.”

International social media support – including from the U.S. right – has amplified the convoy’s message and emboldened protesters, she said.

“Even when GoFundMe canceled [the payments], it built so much momentum and helped turn it into a symbol of resistance,” she said. “Crowdfunding tools can serve to extremists, and these platforms should be aware of this.”

The Washington Post’s Brittany Shammas and Amanda Coletta contributed to this report.