Tara Reade, the former Senate aide who has accused Joe Biden of sexually assaulting her in 1993, on Thursday called on him to withdraw from the presidential race.

In Reade’s first interview since Biden unequivocally denied the allegation last week, she was asked by former Fox News anchor and NBC News correspondent Megyn Kelly what she wanted to say to Biden.

“I want to say: You and I were there, Joe Biden. Please, step forward and be held accountable,” Reade said in a short clip that Kelly posted on her Twitter account. “You should not be running on character for the president of the United States.”

Asked if she wanted him to withdraw, Reade responded: “I wish he would. But he won’t.” She said she did not want an apology from Biden, saying, “I think it’s a little late.”

Reade said last year that Biden made her uncomfortable during her nine-month tenure in his office, including once putting his hand on her neck during a meeting. But in March, she accused him for the first time of assaulting her after pushing her against a wall on Capitol Hill.

Biden adamantly denied the allegation last week and on Thursday reiterated the denial when asked about Reade’s comments that he should drop out of the race.

“Nothing ever happened with Tara Reade,” he said during an interview with Tampa’s Spectrum Bay News 9. “Women have a right to be heard and the press should rigorously investigate claims like these. I’ll always uphold that principle. But in the end, in every case, the truth is what matters. And in this case the truth is these claims are flat out false. False.” 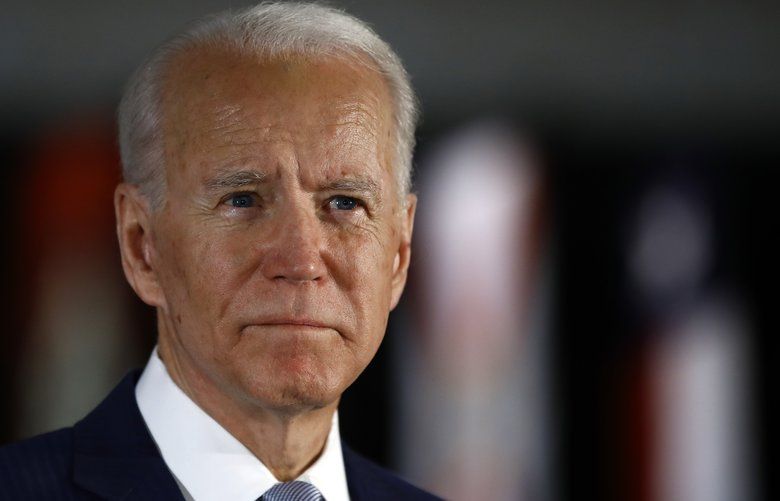 Biden’s deputy campaign manager, Kate Bedingfield, on Thursday night also released a statement challenging some of Reade’s statements, saying “more and more inconsistencies keep emerging.” She pointed, in part, to an Associated Press interview from last year in which Reade said: “I wasn’t scared of him, that he was going to take me in a room or anything. It wasn’t that kind of vibe.”

“Women must receive the benefit of the doubt,” Bedingfield said. “They must be able to come forward and share their stories without fear of retribution or harm – and we all have a responsibility to ensure that. At the same time, we can never sacrifice the truth. And the truth is that these allegations are false and that the material that has been presented to back them up, under scrutiny, keeps proving their falsity.”

In a second clip that Kelly posted Thursday, Reade said that she would “absolutely” go under oath with her claims, and would submit to cross-examinations.

When asked if she would take a polygraph, she said: “I’m not a criminal. Joe Biden should take the polygraph.”

“What kind of precedent does that set for survivors of violence?” she asked. “Does that mean we’re presumed guilty and we all have to take polygraphs? So I will take one if Joe Biden takes one. But I’m not a criminal.”

Reade is now represented by an attorney, Douglas Wigdor, according to a statement released Thursday by the law firm. Wigdor has represented past accusers – including a Fox News employee accusing Bill O’Reilly of harassment – but is also a supporter and contributor to President Donald Trump, who is now likely facing Biden in November.

“Our representation of Ms. Reade has absolutely nothing to do with politics,” Wigdor said in a statement. “We have decided to take this matter on because every survivor has the right to competent counsel, and that is exactly what we will provide.”

Reade has turned down a number of other interview requests, including one from The Post. She reportedly backed out of a sit-down with Fox News’s Chris Wallace, and on Saturday she said in an email to The Post that she had been concerned about her safety and was working with law enforcement.

“I will give an interview after safety in place,” she wrote.

During the clip that Kelly posted Thursday, Reade referred to some of the online animosity she has felt, saying Biden’s supporters “have been saying really horrible things about me and to me on social media.”

“He hasn’t himself, but there is a measure of hypocrisy with the campaign saying it’s safe. It’s not been safe,” she said.

She claimed that her social media accounts have been hacked and that former boyfriends and landlords were being given a platform to criticize her. She also cited criticism of her past praise for Russian President Vladimir Putin.

“That incites people,” she said. “I got a death threat from that because they thought I was being a traitor to America. And I mean, these are serious things. His campaign is taking this position that they want all women to be able to speak safely. I have not experienced that.”