Skip to content
By
Emma Goldberg
The New York Times

Forty hours after treating her first coronavirus patient, on March 30, Angela Aston came home to her family with a cough. “Gosh, your throat is scratchy,” her husband told her. Right away she knew she had likely been infected with COVID-19. As a nurse practitioner, Aston, 50, was confident she knew how to handle her symptoms, and disappeared to her bedroom to quarantine and rest.

By day 50 of her illness, that confidence had disappeared. In late May, she was still experiencing daily fevers and fatigue. She went to bed each evening worried that her breathing would deteriorate overnight. Particularly frustrating was the difficulty she felt explaining to her colleagues, friends and family that after eight weeks she was still sick.

“I felt this stigma like, ‘I’ve got this thing nobody wants to be around,’” Aston said. “It makes you depressed, anxious that it’s never going to go away. People would say to my husband, ‘She’s not better yet?’ They start to think you’re making it up.”

Aston found psychological comfort in an online support group, founded by the wellness organization Body Politic, where more than 7,000 people share their experiences as COVID-19 “long-haulers,” whose sicknesses have persisted for months.

Along with sharing their physical symptoms, many in the support group have opened up about how their mental health has suffered because of the disease. Dozens wrote that their months of illness have contributed to anxiety and depression, exacerbated by the difficulties of accessing medical services and disruptions to their work, social and exercise routines.

Early on in the pandemic, a pervasive myth among patients and some health authorities was the idea that COVID-19 was a short-term illness. Only in recent months has more attention been given to long-haulers. In online support groups like Body Politic and Survivor Corps, long-haulers have produced informal surveys and reports to study their course of illness. 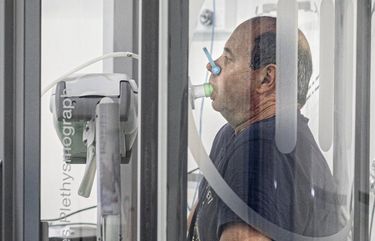 Natalie Lambert, a health researcher at Indiana University School of Medicine, recently surveyed more than 1,500 long-haul patients through the Survivor Corps Facebook page and found a number of common psychological symptoms. She found that anxiety was the eighth most common long-haul symptom, cited by more than 700 respondents. Difficulty concentrating was also high on the list, and more than 400 reported feeling “sadness.”

Dr. Teodor Postolache, a psychiatrist at the University of Maryland School of Medicine, estimates that between one-third and one-half of COVID-19 patients experienced some form of mental health problem including anxiety, depression, fatigue or abnormal sleeping.

Those without COVID-19 infections are also seeing their mental health suffer amid the pandemic. A study published in June by the Centers for Disease Control and Prevention found that symptoms of anxiety and depression nationwide increased significantly during April through June compared with the same period last year. This study found that adverse mental health symptoms were disproportionately reported in young adults, Black and Hispanic adults and essential workers. The National Alliance on Mental Illness, a nonprofit organization, has seen a 65% increase in people reaching out to its help line for mental health resources since the onset of the pandemic.

“The public health response to the COVID-19 pandemic needs to include addressing its mental health consequences,” said Mark Czeisler, an author of the CDC study.

Chimére Smith, 38, a middle-school teacher in Baltimore, marked her sixth month of COVID-19 symptoms in September. On March 22 Smith was on the phone with her therapist when she began to feel a tickle in her throat, which turned into a burn by the evening. Her symptoms became a “wheel of misfortune,” vacillating daily between nausea, diarrhea and headaches, she said.

Since then, she has gone to the emergency room a dozen times. In mid-April she rewrote her will. A persistent mental fog has made it difficult to put together sentences, she said, whereas before the pandemic she had functioned “like a walking thesaurus.” When she realized that she could not return to teaching seventh and eighth grade English this fall because of fatigue, she cried.

By the fourth month of her illness, Smith had contemplated taking her own life. “I said, ‘Who in the world would want to live like this?’” she said. “I wanted to jump out of my own body.”

Smith is one of many long-haulers who, like Aston, said her mental health improved when she joined the online support groups Body Politic and Survivor Corps, where she exchanges tips for managing mental and physical symptoms. Members of these groups supported Smith in overcoming her thoughts of suicide, she said.

Other COVID-19 patients turned to peers in such groups for reassurance that their symptoms were not imagined.

“Every single symptom I’ve experienced is echoed by dozens of other people,” said Angela Vázquez, 33, a COVID-19 patient in Los Angeles. “We can’t all be collectively hallucinating the same symptoms.”

Although social media groups provide validation, there is also some risk. Groups that do not moderate their content can contribute to the spread of misinformation when users share unverified medical advice. (Survivor Corps requires people to link to trustworthy sources, and Body Politic deploys volunteers to moderate posts.) Support group members also sometimes inadvertently reinforce one another’s fears through detailed discussion of their own medical experiences, according to Jo Daniels, a psychologist at the University of Bath and an author of a recent study in the journal American Psychologist on COVID-19 and mental health.

Some long-haulers said that their doctors recommended limiting the time they spent on these groups daily so they could take in information without becoming overwhelmed.

Immunologists speculate that long-haulers’ symptoms might persist because they harbor fragments of viral genes that are not infectious but that trigger violent immune reactions. There is limited knowledge of COVID-19’s lingering impact, however, both because the illness is still new and because of broader gaps in understanding the long-term effects of viral infections.

Many long-haulers said their mental health suffered when they faced skepticism about their symptoms from friends, family and even medical providers. Female long-haulers pointed to numerous studies showing that medical providers were more likely to underestimate women’s pain levels and misdiagnose their conditions. Smith said that in her first week of illness, her male doctor suggested she might have a sinus infection rather than COVID-19. Vázquez was told that her difficulty breathing could be a product of anxiety. Gina Assaf, a consultant in Washington, D.C., who helped write Body Politic’s report, said that by week six of her COVID-19 course, her doctor asked if her symptoms could be bad allergies.

“That felt like gaslighting,” Assaf said. Her friends were dubious of her lingering symptoms. “I stopped talking about it with a lot of my friends because it felt like they couldn’t understand.”

The pandemic has caused mental stress for many in its disruption to social, work and exercise routines. But these interruptions are often worse for long-haulers. Some cut themselves off from community — partly because they are sick, but also because they are loathe to explain physical and mental problems that they themselves do not understand. The activities that they normally rely on to relieve stress, such as exercise, are difficult or impossible to undertake. In Lambert’s survey of long-haulers, “inability to exercise or be active” was the fifth most commonly reported symptom, cited by 916 respondents.

Being unable to work and feeling unproductive can also hinder mental health, according to the National Alliance on Mental Illness. Losing income and health insurance brings its own form of anxiety.

“My doctor said the most important thing is to completely de-stress,” said Jenna Bitar, 28, a New Yorker who contracted coronavirus and was placed on leave by her employer in March. “But how do I avoid stress when I don’t even know if I’ll be able to afford my medical bills? I don’t have a job.”

For long-haul COVID-19 patients, one helpful mental health resource is validation from friends, family and colleagues, Lambert said. She also called for primary care physicians to stay up-to-date on new research so that they could properly inform their patients, and for clinical researchers to continue studying the disease’s mental health and cognitive effects.

Daniels, the University of Bath psychologist, said that researchers should study strategies for improving mental health, given the many people who turn to negative coping mechanisms like substance abuse.

Several long-haulers said they were learning to be gentle with themselves, as they adjusted to a new normal in their work and family lives.

“I’ve had three OK days, but I’m hesitant to share that, because it could go away,” Smith said. “Long-haulers will tell you that. We preface every conversation when we feel good with, ‘I’ll regret saying this tomorrow.’”