First they baked, then they burned, and now they’re inundated.

The Pacific Northwest and British Columbia have endured a punishing siege of climate disasters since the summer, supercharged by human-caused climate change. After an unprecedented heat wave to close June and a rash of wildfires that followed, the region is now recovering from devastating floods and landslides, blamed for at least two deaths.

In both western Washington state and British Columbia, entire communities were engulfed by floodwaters, which entered homes and businesses early this week, displacing thousands of people. Streets turned into rivers, stranding hundreds of vehicles and leaving some areas inaccessible. In British Columbia, damage to highways and railways from landslides and flooding is so severe that repairs could take weeks or longer.

The cost of this disaster is expected to swell, due to its sweeping effects on property, infrastructure and agriculture.

“[T]his is certainly going to be at a minimum into the hundreds of millions (USD),” wrote Steve Bowen, meteorologist and head of catastrophe insight at reinsurer Aon. “It is within reason to assume that it may pass the billion-dollar threshold as well.”

The exceptional rainfall was caused by a powerful, 2,600-mile-long narrow band of water vapor originating near Hawaii, known as an atmospheric river. Such rivers in the sky have unloaded heavy rain in the region since October, triggering multiple rounds of flooding and mudslides. But the event on Sunday and Monday, rated level 5 out of 5 on the scale for the atmospheric rivers, was the most intense of the season so far. 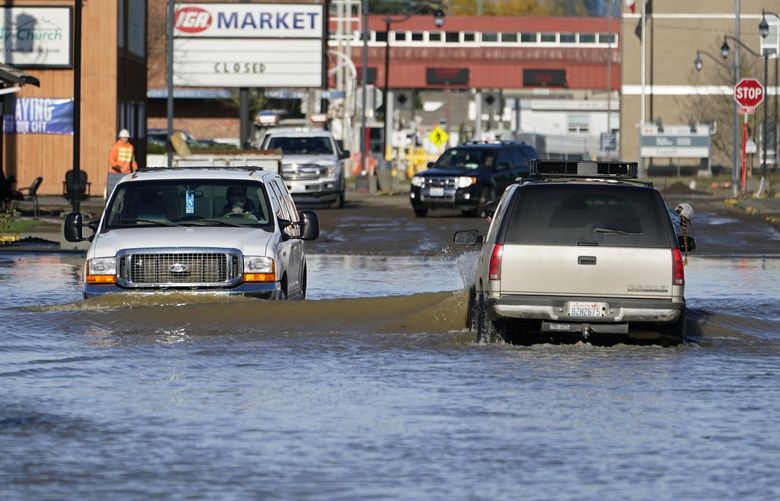 Officials in British Columbia have described the torrents as “the worst” to hit the province “in a century,” with impacts “significantly greater than expected.” More than 17,700 people were evacuated because of the flooding, according to the provincial government. Hundreds of people trapped in cars were hoisted to safety by military helicopters Monday. At least nine people were shuttled to hospitals; meanwhile, police reported one death.

British Columbia Premier John Horgan declared a provincial state of emergency Wednesday, advising against nonessential travel to the affected areas and the hoarding of goods. He said he expects more fatalities to be confirmed in the coming days.

“These are extraordinary events not measured before, not contemplated before,” Horgan said. “We all know that we live in a rainforest. We get wet in November, but nothing — nothing — remotely resembling this.”

Armel Castellan, a meteorologist with Environment Canada, told reporters that the rainfall over 24 to 36 hours exceeded what many locations typically see during all of November, which is the wettest month of the year.

On Wednesday, flooding and mudslides had effectively choked off Vancouver from the rest of the province, as large sections of key highways and railroads into Canada’s largest port city were destroyed or damaged, sparking fears of supply shortages.

Roughly 150 miles northeast of Vancouver, a mudslide damaged a stretch of Highway 99 near Lillooet, which received almost two inches of rain from Sunday to Monday. The Royal Canadian Mounted Police said Tuesday that at least one person had been killed, and that several people were missing.

“The total number of people and vehicles unaccounted for has not been confirmed,” said Sgt. Janelle Shoihet, a spokeswoman for the British Columbia RCMP, “however, investigators have received two missing people reports and believe there may have been other occupied vehicles that were lost in the slide.”

On Sunday, the city of Abbotsford, 40 miles southeast of Vancouver, received 3.95 inches — twice its previous record in 1998. The following day, the city received another 2 inches.

Officials in Abbotsford said 184 people who could not safely evacuate had been rescued by air and water. They had warned Tuesday of the imminent and “catastrophic” failure of a pumping station, but Mayor Henry Braun told reporters Wednesday that the pumping station had held out.

Many volunteers and contractors, he said, had built a road and a dam to protect the pumping station “and buy us some time.”

As officials assessed the damage, aerial footage showed large sections of major highways, farms and homes submerged under muddy brown water. Farmers used motorboats and Jet Skis to rescue cattle — many of them neck deep in cold floodwaters — but officials said that not all livestock were saved.

“I think I saw a few cows that seemed to be floating in the water yesterday from the helicopter,” Braun said. “But we have no numbers. There’s a lot of birds out there, too, poultry — and I saw barns that looked like half-full of water. I can’t imagine that there’s any birds left.”

Many of the communities that have been forced to evacuate because of the flooding had hosted wildfire evacuees or been under evacuation alerts or orders this year because of the raging infernos, including in Merritt, a city of some 7,000 people roughly 160 miles northeast of Vancouver.

Provincial officials have faced questions about whether they had adequately alerted residents to the danger and severity of the forecast weather and whether they could have been better prepared for it. The province has drawn some criticism for not using a system to deliver emergency alerts to mobile phones.

In western Washington, rains have been relentless since mid-October, with some areas topping 40 inches in 30 days. On Monday, the National Weather Service reported four rivers in the region had swelled to record levels. Seattle observed rain in each of the first 15 days of November.

Amid the blast from the atmospheric river Monday, Gov. Jay Inslee, D, declared a severe weather state of emergency in 14 counties.

Whatcom County, Wash., across the border from British Columbia, endured some of the state’s worst flooding. Waters rose above some first-floor windows, inundating homes and businesses in the city of Sumas, right at the Canadian border. The city’s Facebook page estimated that 75% homes incurred water damage.

To the south of Sumas, The Seattle Times reported that police had recovered the body of a man who was reported missing after his car was swept away by floodwaters Monday morning.

Parts of Bellingham, Wash., about 45 miles south of Vancouver, were also extensively flooded. Drone footage showed vast areas submerged in water. Mudslide debris forced the closure of Interstate 5 near Bellingham on Tuesday. The city received 5.57 inches of rain between Saturday and Monday, more than it typically sees in the entire month of November, according to The Associated Press.

Significant flooding was also reported in Skagit and Clallam counties.

Another storm is expected to bring more rain and mountain snow to the region Thursday night into Friday.

The waterlogged landscape is a stark contrast to the heat-plagued and drought-stricken scenes just months before. Washington state and British Columbia have faced several extreme weather events recently, including an oppressive heat wave that killed hundreds of people and cooked shellfish alive at the end of June.

A panel of scientists concluded that the unprecedented heat wave would have been “virtually impossible” without human-caused climate change.

Devastating wildfires forced many from their homes in British Columbia during the summer months, blanketing the province in heavy smoke. More than 1,600 fires burned about 2.1 million acres of land.

“Over the past six months, we had drought conditions in Merritt where the river was at its lowest point in living memory, where we had people evacuated because of wildfires raging in temperatures that were unprecedented, and now, we have the entire community underwater,” Horgan said.

Scientists found that this abrupt change from record dry to record wet conditions — or precipitation whiplash — is expected to increase with global warming in parts of western North America. Just three weeks ago, another category 5 atmospheric river brought about historic rains to end a record-breaking dry spell in Sacramento. By the end of this century, researchers project that these dry-to-wet precipitation events could increase by 25 to 100% in California.

In a warming world, strengthening atmospheric rivers are expected to boost heavy precipitation events. By the end of the century, these narrow jets of moisture are projected to hit more frequently at a higher intensity (category 4-5), switching from “mostly or primarily beneficial” to “mostly or primarily hazardous,” according to a study published last year.

Another study found atmospheric rivers will be about 25% wider and longer — meaning their heavy rain and strong winds will increase by about 50%. The frequency of the most intense atmospheric rivers is projected to nearly double by 2100.

Aon’s Bowen said that Canada has seen a “notable uptick” in costly disasters in the past decade. “As the influence of climate change on behavioral patterns of weather events becomes even more evident, Canada is likely to be facing more of these extreme types of events in the years to come,” he wrote.