Six of the candidates vying for the 2020 Democratic presidential nomination took the stage Wednesday night in Las Vegas for their last debate before Nevada’s caucuses Saturday.

Here is how the candidates’ remarks stacked up against the truth.

What Warren said: “I’d like to talk about who we’re running against, a billionaire who calls women fat broads and horse-faced lesbians. And no, I’m not talking about Donald Trump. I’m talking about Mayor Bloomberg.”

This is mostly true.

In 1990, Bloomberg’s colleagues at his financial data firm compiled a book of one-liners purportedly uttered by their boss, including a number of bawdy and sexist comments. Among the quotes was a quip about the British royals, in which Bloomberg used the terms “horsey-faced lesbian” and “fat broad” to refer to two female members of the royal family.

In 2001, Bloomberg dismissed the book of quotes as “Borscht Belt jokes.” He has never explicitly admitted to having said the quotes in the book. Last year, though, a Bloomberg spokesman, Stu Loeser, issued a general comment about Bloomberg’s history of misogynist comments, saying: “Mike has come to see that some of what he has said is disrespectful and wrong. He believes his words have not always aligned with his values and the way he has led his life.” 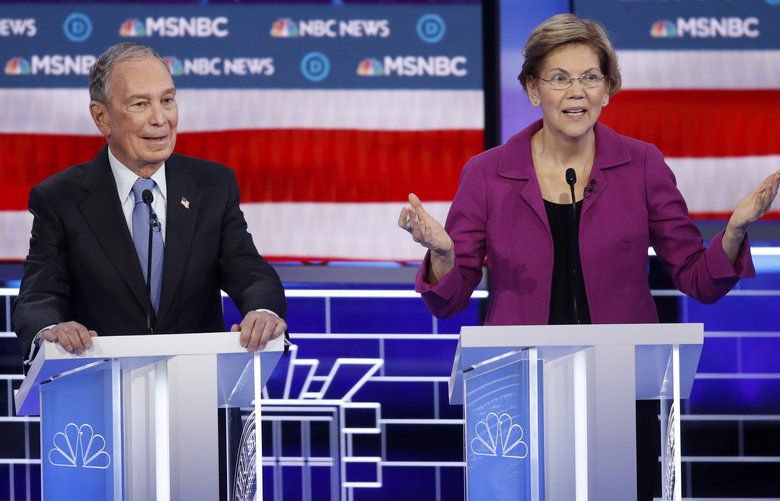 — Warren said Bloomberg had blamed the 2008 financial crisis on African Americans and Latinos.

What Warren said: “When Mayor Bloomberg was busy blaming African Americans and Latinos for the housing crash of 2008, I was right here in Las Vegas literally just a few blocks down the street holding hearings on the banks that were taking away homes from millions of families.”

Bloomberg’s comments were made in 2008 as the subprime mortgage crisis was pulling the country into the biggest economic slowdown since the Great Depression. Asked to explain the origins of the crisis in an appearance at Georgetown University, Bloomberg linked it to federal interference in the mortgage lending business and a wide variety of other factors like “very cheap money” in the form of low Federal Reserve interest rates, a failure by banks to consider that home prices could fall, and developers that built more houses than the market could absorb.

Where his critics have focused, however, is on the first part of his 8-minute answer. He started his answer off by saying the present economic woes began when “there was a lot of pressure on banks to make loans to everyone.” He then pointed to legislation passed by Congress to end the practice known as “redlining,” in which banks declared entire neighborhoods off limits to lending. These were usually poor, heavily minority communities.

“Once you started pushing in that direction,” he added, “banks started making more and more loans where the credit of the person buying the house wasn’t as good as you would like.”

Adding more unpredictability to the situation, he said, were bankers and Wall Street executives who had created such complex instruments to profit from mortgages that they did not, in essence, understand what they were selling.

— Bloomberg and Sen. Bernie Sanders came under fire for being extreme opposites whose views are not representative of the Democratic Party.

Sanders is formally running for president as a Democrat, according to his Federal Election Commission filing. However, as a senator he is an independent who caucuses with the Democrats. His FEC filing for his 2024 senate reelection campaign lists his party affiliation as “Independent” and his Senate website continues to have an “I” next to his name.

As for Bloomberg, he was a lifelong Democrat before running for mayor of New York City as a Republican in 2001. In 2007 he changed parties and became an independent. In 2018, as he prepared to run for president, Bloomberg once again became a Democrat.

What Biden said: “I notice what everybody’s talking about is the plan that I first introduced.”

Four candidates — Biden, Sen. Amy Klobuchar, Buttigieg and Bloomberg — support a public option, which anyone can buy into but retains private insurance. The concept has been around for many years.

Biden first released his health care plan in July and Buttigieg delivered his in September. Klobuchar released hers in May, though it did not go into the same level of detail as the other plans on the implementation of the system. Bloomberg entered the race in November and released his plan in December.

Biden’s and Buttigieg’s plans do share many facets — but that’s not particularly surprising or a sign of Biden’s particular leadership on the issue. (Sen. Michael Bennet of Colorado, who has since dropped out of the race, has argued that Biden actually copied his 2017 health care plan, which Klobuchar supported.)

“It’s not unusual to see presidential candidates have health care reform proposals that are very similar,” said Larry Levitt, the president of the nonprofit Kaiser Health Foundation. “Many of the ideas in the Biden and Buttigieg plans have been circulating in health policy circles for several years. Candidates rarely create these policy proposals from scratch.”

Their plans, Levitt said, “represent is an emerging consensus among Democrats of what a health care reform plan might look like in 2021 other than Medicare for all, if the party wins in 2020.”