It was Mother’s Day, but President Donald Trump mostly had other things on his mind. In a giant tweetstorm on Sunday – 126 tweets, the third-highest daily total of his presidency, according to FactBa.se, a website that tracks Trump’s statements – the president offered scattershot commentary on a range of topics. He accused former president Barack Obama of committing a crime (i.e., #ObamaGate), railed about the prosecution of his former national security adviser Michael Flynn and defended his handling of the coronavirus pandemic.

Most of Trump’s tweets were retweets by conservative commentators. A common theme is that somehow Obama manipulated the federal “deep state” bureaucracy to set Trump up to fail in his first weeks as president, resulting in the firing of Flynn.

“It’s a disgrace that it happened,” Trump told reporters at a news conference on May 11. “Some terrible things happened . . . and you’ll be seeing over the coming weeks.” But he refused to say what Obama did wrong, saying only, “You know what the crime is.”

Here’s a guide through some of the president’s tweets, including some from May 11, the day after Mother’s Day, as Trump continued having an itchy Twitter finger.

“Because it was OBAMAGATE, and he and Sleepy Joe led the charge. The most corrupt administration in U.S. history!” — (Tweet, May 11)

Trump’s tweet here is over an article published in the Federalist, titled “Why Did Obama Tell The FBI To Hide Its Activities From The Trump Administration?” The article, written by Margot Cleveland, argues that Obama directed top officials at the FBI and the Justice Department to withhold information from the incoming Trump administration about an investigation of Flynn. “There is no excuse for an outgoing president to advise hold-over high-ranking officials to do likewise once the new president has taken office,” Cleveland writes. “Or, rather, the only excuse is an equally scandalous one: Obama knew the Russia investigation was a hoax from the get-go.”

The Federalist, a conservative website with murky financial backing, has long argued that the Russia probe was a “hoax,” notwithstanding the numerous indictments, including of Russians, that resulted from the investigation led by special counsel Robert Mueller. Central to this narrative is a meeting held in the Oval Office on Jan. 5, 2017. Cleveland links to another Federalist article that alleges a series of leaks were engineered after the meeting “to sideline key law enforcement and intelligence officials and cripple the ability of the incoming Trump administration to run the country.” Coincidentally or not, a number of the articles cited were part of The Washington Post’s Pulitzer Prize-winning entry in national reporting, an accomplishment that Trump’s supporters have long tried to discredit.

The fallacy here is an assumption that reporters are handed leaks on a silver platter, doled out by scheming officials. The reality is that scoops in the national security realm almost always come about only after a reporter pulls at various threads, speaking to a variety of sources to figure out what is happening behind closed doors. It’s often like assembling a jigsaw puzzle.

“Typically, I got my best stories in small pieces from people I had cultivated for years or discovered through a common web of trust, each contributing part of a whole that none would tell me directly,” noted three-time Pulitzer Prize winner Barton Gellman. 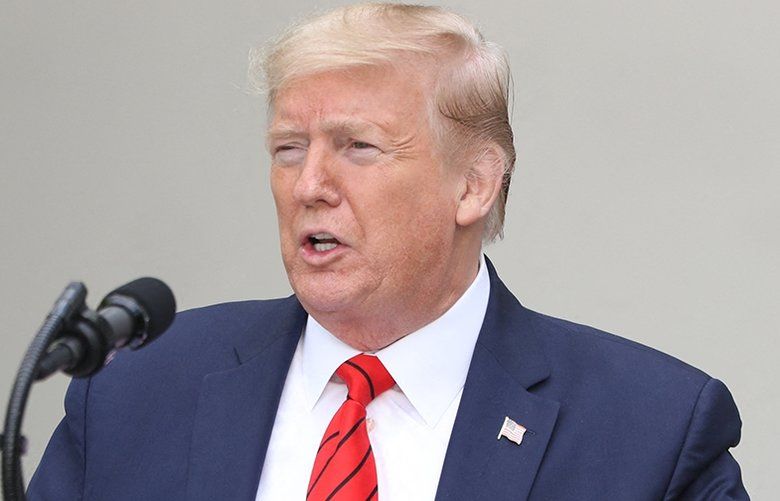 As for the Jan. 5 meeting, a key document cited is an email that then-national security adviser Susan Rice sent herself on Jan. 20, 2017. Rice wrote that Obama told participants that “as we engage with the incoming team, we are mindful to ascertain if there is any reason that we cannot share information fully as it relates to Russia.” Obama was aware of intercepts of conversations between Flynn and the Russian ambassador at the time, Sergey Kislyak, concerning sanctions imposed by Obama for Russian interference in the 2016 election. He asked then-FBI Director James Comey to inform him if anything changes that would affect the sharing of classified information, Rice’s email said.

An attorney for Rice said she wrote the email on the advice of White House counsel to create a permanent record of the conversation. “We were not informed by Director Comey or the Attorney General that there was an active investigation of anybody in the Trump orbit,” Rice told House investigators in an interview made public May 7. “We would not have asked that question because, in the Obama White House, we maintained scrupulously the firewall between people in the White House and contacts with Justice about potential or actual criminal matters.”

“Michael Flynn – Here’s How The FBI Entrapped and Prosecuted an Innocent Man” — Tweet, May 10

These two retweets of articles from conservative media outlets offer a similar theme, with Flynn’s attorney claiming (without evidence) that the alleged conspiracy against Flynn went all the way up to Obama. The second article also claims that federal officials engaged in orchestrated leaking as part of a scheme to entrap Flynn. “Despite all of their scheming and calculating, the perjury trap failed miserably. Flynn told the truth” when he met with FBI agents asking about his conversations with Kislyak, the article claims.

Flynn, however, has acknowledged he lied. In pleading guilty, Flynn said: “I recognize that the actions I acknowledged in court today were wrong, and, through my faith in God, I am working to set things right. My guilty plea and agreement to cooperate with the Special Counsel’s Office reflect a decision I made in the best interests of my family and of our country. I accept full responsibility for my actions.”

Prosecutors said FBI agents gave Flynn multiple opportunities to correct his false statements during the interview. Flynn testified in 2018 that he knew it was a crime when he lied to the FBI. (One unusual thing: At Comey’s direction, the FBI surprised top officials at the Justice Department by arranging the interview when the department was still considering whether to inform the Trump White House.)

Last week, Attorney General William Barr directed the Justice Department to drop the case against Flynn, in a filing that argued the investigation of Flynn’s calls was not justified. But a former top Justice Department official says Barr “twisted” her testimony to Mueller to make the case for dismissal.

The testimony “does not suggest that the F.B.I. had no counterintelligence reason for investigating Mr. Flynn,” Mary McCord, former acting assistant attorney general for national security, wrote in The New York Times. “It does not suggest that the F.B.I.’s interview of Mr. Flynn – which led to the false-statements charge – was unlawful or unjustified. It does not support that Mr. Flynn’s false statements were not material.”

In her interview with Mueller’s team, McCord said that it had seemed “logical” to her for the Russians to have conversations with the incoming administration until she read the transcripts. “After reading them, she felt they were ‘worse’ than she initially thought” because “Flynn proactively raised the issue of sanctions” and she thought it is hard to forget something you raised yourself in a conversation.

The Mueller report says that “with respect to the sanctions, Flynn requested that Russia not escalate the situation, not get into a ‘tit for tat,’ and only respond to the sanctions in a reciprocal manner.” But the transcripts of Flynn’s calls have never been released.

“Barack Hussain [sic] Obama is the first Ex-President to ever speak against his successor, which was long tradition of decorum and decency. Should anyone really be surprised?” — Tweet, May 10

This retweet was long ago debunked by Snopes. (Over this retweet, Trump wrote: “He got caught, OBAMAGATE!”)

The claim that no president before Obama was ever critical of his successor is not correct. Here’s a sampling.

“Coronavirus numbers are looking MUCH better, going down almost everywhere. Big progress being made!” — Tweet, May 11

Trump made this bewildering claim on a day when covid-19 deaths in the United States climbed past 80,000, an increase of about 27% over the total on the previous Monday. Total confirmed cases reached 1.3 million on Monday, up by about 150,000 from the previous week.

Let’s visualize what that means, using a logarithmic scale. At the rate seen over the previous week, it would take one month for the United States to double its total covid-19 cases, according to data from the Johns Hopkins University Center for Systems Science and Engineering.

Trump also made this claim just as the White House was asking most staff members to wear masks, after two tested positive for the novel coronavirus in recent days, including Vice President Mike Pence’s press secretary. So the numbers are actually going up, even in the president’s home.

“Dems are trying to steal the Mike Garcia Congressional Race in California.” — Tweet, May 11

Trump often makes unfounded accusations about fraudulent votes and rigged elections, including the one he won in 2016.

The president has tweeted frequently about California’s May 12 special election for a U.S. House seat vacated by former congresswoman Katie Hill, a Democrat who flipped the district from Republican hands in 2018 and then resigned amid scandal the next year.

Trump claims that Democrats are trying to steal this race in Lancaster, a suburb of Los Angeles. His evidence is that local officials decided to open an in-person polling location instead of voting entirely by mail. But the Republican mayor of Lancaster agreed with the move to have an in-person polling location, and it’s not stealing an election to facilitate voting.

“He should be FIRED by Concast. If done by a Republican, would be ‘prosecuted’. @AjitPaiFCC” — Tweet, May 11

Trump spent several tweets railing against Chuck Todd, the host of NBC’s “Meet the Press.” During Sunday’s show, NBC briefly showed a snippet from an earlier interview Barr had with CBS News.

Barr’s Justice Department had just filed a controversial motion to drop the criminal case against Flynn.

Todd: Wait until you hear this answer. Take a listen.

CBS reporter: When history looks back on this decision, how do you think it will be written?

Barr: Well, history is written by the winners. So it largely depends on who’s writing the history.

Todd: I was struck, Peggy, by the cynicism of the answer. It’s a correct answer. But he’s the attorney general. He didn’t make the case that he was upholding the rule of law. He was almost admitting that, yeah, this is a political job.

Todd said the attorney general “didn’t make the case that he was upholding the rule of law,” but Barr in fact went on to make such a case in the very next sentence. Here’s his full quote: “Well, history is written by the winners. So it largely depends on who’s writing the history. But I think a fair history would say that it was a good decision because it upheld the rule of law. It helped, it upheld the standards of the Department of Justice, and it undid what was an injustice.”

It bears mentioning that NBC appended a correction to the transcript of Sunday’s “Meet the Press,” which reads: “We inadvertently and inaccurately cut short a video clip of an interview with AG Barr before offering commentary and analysis. The remaining clip included important remarks from the attorney general that we missed and we regret the error.”