A top official at the Environmental Protection Agency informed the U.S. Army Corps of Engineers in Alaska late Thursday that the EPA would not formally object at this point to the proposed Pebble Mine, a massive gold and copper deposit where mining could damage the world’s largest sockeye salmon fishery.

Christopher Hladick, the EPA’s regional administrator for Alaska and the Pacific Northwest, wrote to the Alaska district engineer, Col. David Hibner, that the agency still has serious concerns about the plan, including that dredging for the open-pit mine “may well contribute to the permanent loss of 2,292 acres of wetlands and. . . 105.4 miles of streams.”

But Hladick said the agency would not elevate the matter to the leadership of the two agencies, which could delay necessary approvals for the project to advance. The EPA “appreciates the Corps’ recent commitment to continue this coordination into the future,” he wrote.

The move marks the latest chapter in a yearslong battle that has pitted a Canadian-owned mining company against commercial fishing operators, native Alaskans and conservationists determined to protect the unique and economically critical sockeye salmon fishery in Bristol Bay.

The Corps is set to decide this summer whether to grant a federal permit to the Pebble Partnership to move forward with the project. The EPA could still veto such a permit, and last year it sent the Corps a letter saying the project slated for southwest Alaska “may” harm “aquatic resources of national importance.”

But the EPA had to determine by Thursday whether the mine “will” cause such harm, and it opted not to do so – an indication that the environmental agency does not appear likely to block the mine. 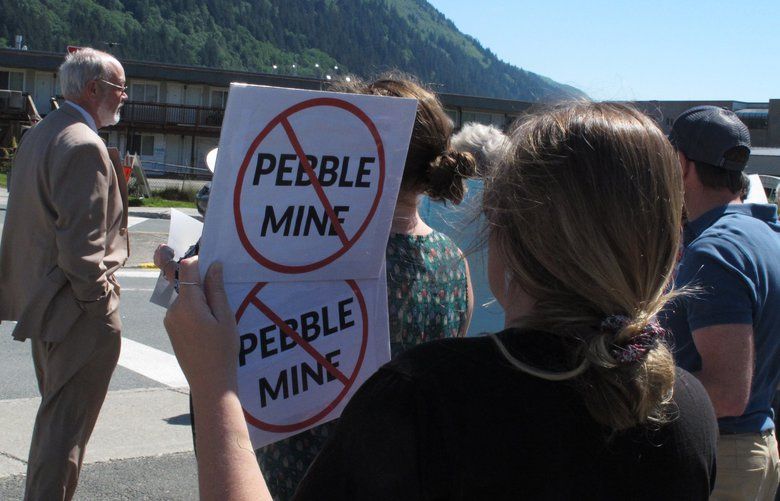 Pebble Partnership chief executive Tom Collier, whose company has proposed a 20-year plan to extract copper, gold and molybdenum from a deposit worth hundreds of billions of dollars, hailed the decision in a statement as “another indication of positive progress for the project.”

Rich Nolan, president and chief executive of the National Mining Association, also welcomed the EPA’s determination. “It is encouraging to see the permitting process proceeding as intended on this important project, especially after so many years of delay and inappropriate overreach,” he said in an email.

But opponents of the proposed mining operation, located in a watershed that supports a long-standing Alaska Native subsistence tradition as well as a lucrative commercial and recreational fishery, noted that the EPA and other key agencies have raised concerns the Corps has yet to address.

“There are still many substantive issues with the project proposal that have yet to be resolved,” said Bristol Bay Native Corp. Vice President Daniel Cheyette, whose tribal organization opposes the mine, which would be the largest in North America.

Mark Ryan, a lawyer in private practice who served as regional counsel in EPA Region 10 between 1990 and 2014, said in a phone interview that the EPA’s letter appears contradictory.

“It’s a very odd letter,” Ryan said. “It points out the mine’s very serious environmental damage, but then does not invoke EPA’s powers to elevate the issue for further discussion.”