LOS ANGELES — Democrats are growing confident that California Gov. Gavin Newsom will prevail in Tuesday’s recall election, averting political disaster by energizing liberal voters. Across the country, his party is paying close attention to how he’s doing it: Warning Democrats that if they stay home, Donald Trump and his agenda will prevail.

“Trumpism is still alive all across this country,” Newsom said at a recent campaign stop in East Los Angeles, talking to volunteers for a Black voter outreach group before they began knocking on doors. “Is it any surprise the entire Trump organization is behind this recall?”

California is one of three Democratic-led states — the others are Virginia and New Jersey — holding statewide elections this year. In each state, party leaders acknowledge that in past elections Trump polarized and motivated voters that they had never won before his presidency. Democrats worried that his absence from the ballot, along with their party’s historic difficulties in turning voters out in nonpresidential elections, would threaten their chances.

Yet in all three, Democrats say they think the ex-president, who has hinted at a third run in 2024, still has power to mobilize liberal voters and keep suburban moderates in the Democratic tent, even if he is no longer on the ballot or in office. The recall will be the first test of whether they’re right.

“Republicans thought they could get away with this because Democrats weren’t going to show up,” said Rusty Hicks, the chairman of the California Democratic Party. “Trump may be less a part of the scene, but his policies and viewpoints and positions have become part of the landscape. We’ve done a good job making clear what the stakes are.”

That effort has been given some credibility by Republicans themselves. With Trump’s loyalists the most powerful part of the party, GOP candidates who once might have enjoyed some level of independence from national leaders have had to overtly embrace the former president lest they depress Republican turnout. Amid a sharply partisan electorate, issues such as Republican objections to mask mandates and GOP efforts to enact strict abortion bans have been swiftly tailored into Democratic campaign ads.

Support for Newsom increased after he announced vaccine mandates for health-care and education workers, another tactic Democrats think they can scale across the country.

“It’s good politics and good policy marrying together,” said David Turner, a spokesman for the Democratic Governors Association, which poured $7.4 million into the anti-recall effort. “Democrats are on the right side of this issue.”

Democrats also are counting on changes that have made it easier to vote early or vote by mail.

In Virginia, 45 days of early voting will begin on Friday. New Jersey will allow 11 days of early voting for the first time ever, and voters who cast mail ballots last year can automatically receive ballots for this election. That gives the campaigns time to track who has voted — and to nag those who have not. In California, every registered voter received a mail ballot — which some conservatives, led by Trump, have suggested will lead to a “rigged” election.

“They’re going to cheat,” Larry Elder, the highest-polling of the candidates to replace Newsom, told supporters recently at a rally in Santa Barbara. “The number of people that are going to vote to recall this man is going to be so overwhelming so that even when they cheat, they’re still going to lose.” 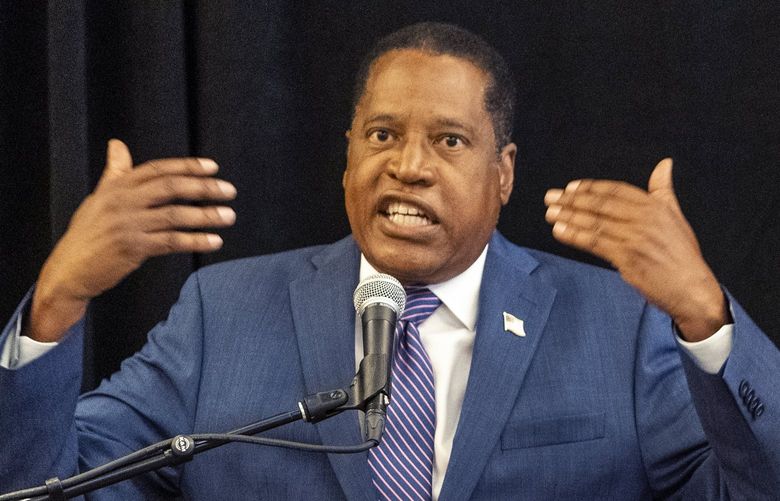 Republicans do not think that the Democratic strategy is effective, as President Joe Biden’s approval ratings have fallen below 50%, and into the 30s among independent voters. Republican opponents in the three states have cast Democrats as trying to avert voters’ eyes from their own failings.

“Democrats are relying on a stale message as they face problematic national trends that depress their turnout and repel independent voters at a rapid pace,” said Jesse Hunt, a spokesman for the Republican Governors Association, which has invested in all three races. “For many people, living under Joe Biden and Democrat governors has meant weak leadership and ineffective response to the pandemic through the first eight months of this year.”

Yet early indications in California suggest that Democratic ambivalence that sparked party worries weeks ago has dissipated at least in part as Newsom has nationalized the race: By Friday morning, registered Democrats had returned more than 4 million mail ballots, more than twice as many as were sent in by registered Republicans.

According to Democrats, volunteers had made more than 28 million calls to voters and knocked on 2 million doors before the final weekend of the election. Republicans said they had made 17.7 million voter contacts in the same period — more than they had in the entire 2020 cycle, when Trump did not seriously compete for California’s electoral votes.

According to Political Data, which tracks ballot returns, Democrats had cast 54% of mail votes at the same point in the 2020 election, compared with 22% for registered Republicans. The gap in the mail ballots this year was similar: 52% from registered Democrats and 25% from Republicans.

Biden will campaign against the recall on Monday in Southern California, a sign that his party expects a win.

But California is the most overwhelmingly Democratic of the three states voting this year, delivering a 29-point margin for Biden last year and a 24-point margin for Newsom in 2018. And even with an enormous get-out-the-vote effort, support for Newsom’s removal remains higher in polling than the vote against Newsom or Biden in their last elections, suggesting some deterioration in the party’s anti-Trump coalition.

That suggests a potential for difficulty in more competitive states such as Virginia, where a surge of suburban votes led to Democratic victories in 2017 and 2019 — allowing them to take over the state legislature for the first time in decades. In polling, former governor Terry McAuliffe, the party’s nominee for governor this year, is currently running ahead of Republican nominee Glenn Youngkin, but below the 10-point margin by which Biden won. McAuliffe said in an interview that Trump remains a factor in the race, in part because he has endorsed Youngkin.

“I agree that Trump had been a huge motivator for the last four years but … he’s not off the ballot here in Virginia,” McAuliffe said. “Very uniquely, of all the races, Glenn Youngkin has inserted Trump back into the race.”

Much as in California, Republicans in Virginia have portrayed the Democratic focus on Trump as a distraction. In July, Youngkin ran a digital ad that accused McAuliffe of “spending all his time attacking Donald Trump.”

But like Newsom, McAuliffe has invested in field organizing, with what he calls “the largest coordinated campaign ever.” Like Newsom, he has highlighted developments in Republican-run states to warn of Trump-style conservatism taking over, if Democrats don’t engage.

“With COVID, people are terrified, horrified — many people are just plain disgusted that people are not getting vaccinated. And they’re terrified about the Texas law” banning most abortions, he said.

The Democratic model for 2021 isn’t McAuliffe’s last race, in 2013, when he narrowly prevailed. It’s the 2017 election that saw Gov. Ralph Northam win by nine points as turnout surged to a 20-year record. According to Northam strategist Mark Bergman, the campaign’s final internal polling had only given the Democrat an edge of two to three points.

“They were heavily motivated by Donald Trump,” said Bergman. Many of the surge voters, he explained, were suburban White women who don’t normally participate in off-year elections. “I think Trump is a factor [in 2021], he’s just not the factor. In 2017, he was the factor.”

In New Jersey, where Gov. Phil Murphy, D, has held a commanding lead in early polls, Trump also has been a recurring character. In one early TV ad, the Murphy campaign ran a clip of the Republican nominee, former state legislator Jack Ciattarelli, saying he “supported Donald Trump’s policies.” At campaign stops, Murphy has warned that the Republican would follow his pro-Trump Republican base in rolling back vaccine mandates.

“These folks back there have lost their minds. You’ve lost your minds!” Murphy said at a summer stop in Union City, after anti-vaccine protesters began to heckle him. “You are the ultimate knuckleheads, and because of what you are saying and standing for, people are losing their [lives].”

Steve DeMicco, a veteran Democratic political consultant in New Jersey, said that Ciattarelli had made it easy for Murphy to portray him as a Trump stand-in. The GOP’s path to victory, as in the other states, appears straightforward: exciting Trump voters, while hoping that Democrats tune out of the election, as they did during many campaigns in President Barack Obama’s first term.

“That’s why you see our opponent going so far to the right,” DeMicco said.

Chris Russell, a Republican consultant working with the Ciattarelli campaign, rejected the idea.

“This race is a referendum on Phil Murphy and his extreme, out-of-touch policies. Nothing he can do or say can change that,” Russell said.

Tuesday’s election in California will be the biggest test of voter enthusiasm so far this year. Smaller-scale elections have seen mixed results, with Republicans running ahead of their 2020 vote share in some places and Democrats running ahead of Biden’s numbers in others.

In May, weak Democratic turnout led to the party being shut out of a special congressional election in Texas. One month later, Rep. Melanie Stansbury, D-N.M., won a landslide victory for what had been a swing seat in Albuquerque. Since the start of the year, Republicans have picked up one state legislative seat, in southwest Connecticut, while Democrats flipped a Republican-held seat just 200 miles away, in New Hampshire.

The uncertainty has driven an active campaign as the race closed in California. Elder’s ads argue that the election is “not about political parties.” (If a majority of voters vote to recall Newsom, the candidate with the most votes on the second part of the ballot will succeed him.)

Messaging from the state GOP has attacked Newsom over high housing prices, an increase in homelessness and a rise in crime since 2019.

Newsom has hewed to his Trump focus. At a Wednesday rally with Vice President Kamala Harris, Newsom linked the recall effort to “the insurrection on January 6th,” and a partisan challenge to democracy. He asked his audience to think about Washington. He had appointed a Democrat to replace Harris in the Senate. A Republican would have appointed someone else, imperiling the Biden agenda.

Some of the 28 million calls made on behalf of Newsom came from Betty Power, 67, a member of San Fernando Valley Indivisible, one of the anti-Trump “resistance” groups that formed after the 2016 presidential election. Since early August, she estimated that she had sent “probably 4oo to 500 postcards” to California Democrats, urging them to vote, and had devoted many hours to phone calls.

“I didn’t feel that energized two months ago,” Power said. “All of a sudden, I started thinking about the repercussions — for our state and our education system and our health-care system, but also the repercussions for the nation.”